If you own an older car, be advised. The high ethanol-content “gas” in use today can cause problems when fed to engines not made to use it. Not so much burn it – ethanol fuel has some advantages, including octane enhancement. 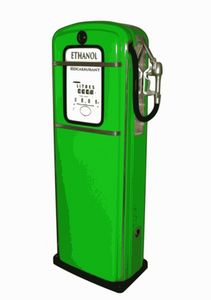 The problems arise when alcohol-laced fuel comes into contact with – and eats away at – rubber and plastic parts, including gaskets, rubber diaphragms, seals, o-rings and so on. The alcohol in the fuel also accelerates the rusting out of steel parts such as fuel lines and (in older cars) steel fuel tanks (most modern cars have composite plastic tanks).

Finally, ethanol-laced “gas” doesn’t keep as well – which isn’t a problem for regularly used cars but can most definitely become a problem for occasional-use older/antique cars (and motorcycles) that might not burn through a tank of fuel for several months.

I got an object lesson about all this the other day, when I spent some time over at my friend Graves’ shop. He has a ’63 Buick Special – which he stores on a lift in one of the not-used bays. We took it down to take it for a ride. The engine would fire, but stall out when you gave it any pedal. So, we popped the hood and looked. Peering into the carburetor while pulling the throttle arm revealed a weak-looking squirt of fuel into the venturis. Faulty/sticking accelerator pump, we reasoned.

A carburetor, unlike fuel injection, works off negative pressure. The vacuum created by a running engine draws the fuel from the carburetor into the intake manifold, and from there to the cylinders. But, there’s a catch. When you stab the gas, the vacuum signal momentarily decreases – which would ordinarily result in a stumble or stall – exactly the problem we were experiencing. The accelerator pump – assuming it is working – shoots gas into the engine to ward off the stumble that would otherwise occur due to temporary fuel starvation. 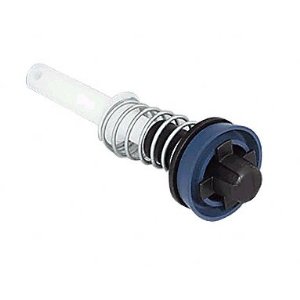 Our accelerator pump was clearly not working. But, why?

My buddy’s old Buick has the 215 aluminum V-8 and Rochester dual-jet (two barrel) carb, so it’s an easy job to access/repair the accelerator pump.

Well, it should be.

We pulled the carb off the engine and took it apart. It was filled with the debris of decomposing fuel – and rubber. The accelerator pump’s flexible rubber diaphragm was shriveled up and physically dissolving. The “goop” inside the carb was likely the admixture of the remains of the rubber, in solution with the ethanol-laced “gas.” I wish I had thought to bring my camera. But what was really startling is that my friend Graves had put a fresh accelerator pump in this carburetor just three years previously! The 10 percent ethanol in virtually all modern “gas” needed only that long to chew the thing to ruin. The carb’s internal passages were also partially occluded with crud and goop. Amazing the car even started. We cleaned the whole bugger out, put in a new (ethanol compatible) accelerator pump cup, gaskets and bolted everything back together. Car ran perfectly.

But for how long? 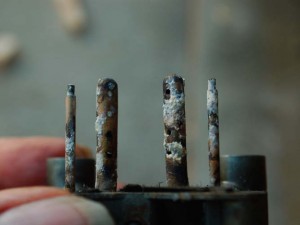 So, what should you do?

Keep in mind that even “modern” cars may have issues with E15. Some manufacturers specifically warn against using it. Only E85-compatible cars are for-sure ok. But that leaves a lot of cars that aren’t, because most new and recent-vintage cars are not E85 compatible. Anything older than about five model years likely isn’t.

For openers, let’s hope E15 is still a ways off.

In the meanwhile, see whether there’s a station in your area that sells 100 percent gas – not E10. Here’s a web site that lists such stations by region. If there is one in your area, fill up your old/occasional-use car with that – and hope it remains available for the foreseeable future.

Unfortunately, it probably won’t. Which is why it is probably time to update your older car’s fuel delivery systems with ethanol compatible components. That will typically mean replacing the following parts:

* Carburetor internals (accelerator pump, needle and seat, floats, gaskets – all these items will be in a rebuild kit).

You may also want to give thought to changing out the gas tank and any steel lines that are not stainless steel. If they’re original – or more than 20 years old – they’re probably already rusting from the insides out. The flakes of rust will get fed through the system, right into your engine.

Once that’s done you’ll want to take additional precautionary measures, including paying close attention to the vintage of the fuel in the tank. You now have a new incentive to drive your old car more often – so as to burn up the gas faster. Don’t let it sit for more than two months, if possible. Top off with fresh gas after every drive. And consider using fuel stabilizer (the major brand, Sta-Bil, now sells an ethanol-specific product; see here for info about that).

Hopefully – fingers crossed – that will be enough.

I suppose we’re going to find out.

Video Rant: How to Avoid ASS