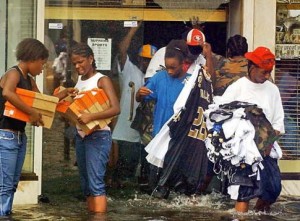 They took three flatscreen TVs, raided her medicine cabinet and her son’s closet and overturned her bed before making off with her 16-year-old daughter’s school laptop — and three six packs of bath soap.

“They stole soap – why? That I can’t understand,” Jones said, smiling and shaking her head.

Jones, 42, notes with amazement she hasn’t cried or screamed since she and her two children returned from riding out Hurricane Sandy at her friend’s house in Mays Landing to find their home ransacked.

“I must be in shock,” said Jones, who has slept with her children on their living room couches because they’re afraid.

Jones returned ahead of the evacuation orders being lifted because her job as a municipal court clerk qualifies her as an essential employee – the only people allowed to travel into the resort since 4 p.m. Sunday. Some of her neighbors in the city’s Northeast Inlet were hit, too – and they wonder how many more victims will emerge once everyone can come back to Atlantic City.

Police have arrested nine people since Monday for breaking into homes and businesses throughout the city.

“They’re taking advantage of the city shutting down, going from house to house to house,” Jones said. “So we all said next time (there’s a storm), we’re staying.”

Burglars find ample opportunities with so many houses left empty during evacuations of storm-ravaged barrier islands statewide. The problem has become so rampant in just a few days that the State Police announced Thursday they would provide backup to bolster security in general and help crackdown efforts already under way by local officers to prevent looting.

Despite a strict 6 p.m. to 6 a.m. curfew in Atlantic City since Tuesday, the resort has suffered what city police, residents, business owners and elected officials describe as widespread looting.

“We’ve had a lot of looting all over,” Sixth Ward Councilman Tim Mancuso said.

The state Attorney General’s Office did not respond to requests for details on which coastal towns would get the assistance, which also could include help with rescue and recovery operations.

The help from State Police might be welcome in Atlantic City where officers have been working long shifts since midnight Monday, Mancuso said.

“Our police officers, they’re really making sure everyone’s obeying curfew, but I’ve heard they need more on even though police are working 12-hour shifts,” Mancuso said. “And we need to give our guys a break, they’ve been working 12-hour shifts for the past four or five days. And it’s tough.”

In Atlantic City, looters broke into Second Baptist Church at HWERE. After spending Tuesday cleaning up the first floor flooded by the storm, the Rev. Collins A. Days returned Wednesday to discover broken windows, overturned furniture and boxes, and computers, printers, microphones, amps and speakers missing from the complex’s offices and classrooms. But with two days, the church was almost ready for Sunday services.

“We’re blessed they did not go into the sanctuary at all, fortunately,” said Days, who rode out the storm at his house four blocks from the church in the city’s Uptown section. “We’re working hard so that the worst of the storm doesn’t affect us getting back to normalcy. Some people are desparate, or acting not in their right mind b/c of drugs or something. That’s just the nature of things, and we’re not disheartened or surprised by it. It’s just the times we’re living in. I’m just hoping they’ll open the city up quickly because I know a lot of people’s houses have been broken into.”