What is it about not doing things for oneself that’s so appealing to so many people? 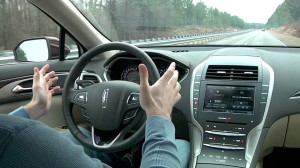 Here’s the latest – something I’ve been dreading for years: The first production driverless car:  The 2013 Lincoln MKZ. The thing can be set on what amounts to autopilot, at which point a combination of cameras, servos and computers keeps the car in its lane – even in the curves – without any hands on the wheel at all.

This is a great leap forward, technology-wise, over  the “smart” cruise control systems that have been available in mid-priced and higher cars for several years now. Those systems merely adjust the car’s speed in relation to the ebb and flow of traffic. If you set the cruise at 65, but roll up behind a car going slower, the system will slow you down (by cutting throttle or applying the brakes) without your having to do anything but keep your hands on the wheel.

Lane Keeper does away with the keeping-your-hands-on-the-wheel part.

Welcome on board, Captain Dunsel. 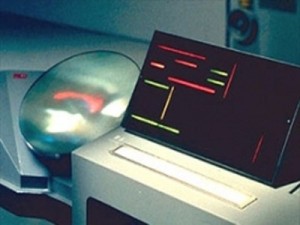 Do you remember Captain Dunsel?

In a prophetic, sad – and very instructive – episode of the original Star Trek series, Captain Kirk – the driver of the Enterprise – is replaced by The Ultimate Computer.  It autonomously controls all the Enterprise’s functions. Kirk is reduced to 180 pounds of ballast – Captain Dunsel, a mocking term used to describe something useless.

But, a problem soon manifests. The M-5 Ultimate Computer starts doing unanticipated (and unwanted) things – like using the starship’s weapons to destroy other Federation vessels. It won’t accept orders  to stand down – and fights to keep from being turned off. The crew eventually manages to disable the M-5 and regain control of their ship. The moral of the story is that while computers are more efficient than human beings, they aren’t necessarily better.

And arguably, excessive reliance on computers makes them worse.

Lane Keeper – Lincoln’s real-world version of the M-5 Ultimate Computer – assumes the driver is an idiot. Addled/lazy/inept – and can’t be trusted. Worse – that he likes being such.

As this and similar technology becomes ubiquitous and pervasive – which it will –  that assumption becomes a self-fulfilling prophecy, a feedback loop. Expect less – get less.

Try to imagine a future – not far off – in which a generation of people have never learned even the rudiments of controlling a car themselves, but have been conditioned to rely on computers to “keep them safe.”

Imagination is not even necessary. We already have the example provided by anti-lock brakes.

ABS prevents wheel lock during hard braking, which in turn avoids the problem of no longer being able to steer the car because the (front) wheels are locked up. Skilled drivers know to ease up slightly on the brake pedal to keep the front wheels from locking up – and thus, avoid losing the ability to steer the car. This is called threshold braking. Unfortunately, it was deemed an art too abstract, a skill too tough to master. And thus, ABS. Most people under the age of 30 have never driven a car without ABS. Which means, they never learned how to threshold brake. 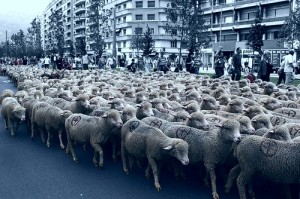 Well, so what? Doesn’t ABS render that an obsolete skill – like double clutching a manual transmission?

Indeed it does. But now, you’ve got a driver who’s just that little bit less of a driver. And ABS – as with any technology – has its functional downsides, too. An ABS-equipped car is much harder to deal with on ice (or, if it’s a 4WD, in the mud) because the filthy computer defeats (by pre-empting) any effort to get the car moving. A competent driver in a non-ABS (and traction control turned-off) car can deal much more effectively with such scenarios. But human competence is not what’s desired. “All you have to do is sit back and let the machine do the work,” advises the M-5’s designer, Dr. Daystrom.

With the advent of each new human-usurping technology, the human becomes that much less relevant. Homo Consumerus – the sail-fawn gabbling talker, not the old-fashioned doer – is the new man. 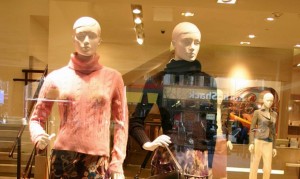 But I’d say, what’s the point of living if all our living – our deciding and acting –  is done by someone … by something … else? A mannequin – or a corpse – is dressed and posed and positioned by others. It does nothing itself. Can you imagine anything more horrible? To just sit there? To be positioned?

And the mannequin – and the corpse – are at least insensate.

Those over 40 will gnoe what I am saying.

Mastery – learning how to competently do things oneself – is the very essence of worthwhile living. Its antipodal opposite is that which is in the process of becoming – of merely existing. Of which Lane Keeper is merely one ugly harbinger among many.

It was said of Jefferson that he could “”calculate an eclipse, survey an estate, tie an artery, plan an edifice, try a cause, break a horse, dance a minuet, and play the violin.” 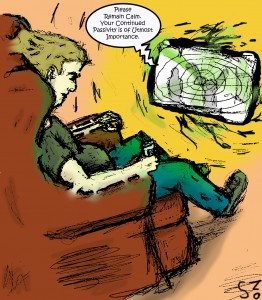 I expect ol’ Tom would have preferred to do his own driving, too.

Does that sound like the world of Lane Keeper to you?

And which world sounds more appealing? The world of Lane Keeper – in which human beings are inexorably reduced to Dunsels (perhaps Eloi is more apt) merely along for the ride, dependent on intelligences other than their own? Or a world – rapidly receding in the rearview – in which men learn to do things for themselves and thus may be called men?

You know where I stand.