In yet another huge blow to the rhetoric and narrative of the Obama administration and its desire to disarm the American public, a DHS bid has been uncovered (see documents below) showing that the Department of Homeland Security recently put out an offer to purchase 7,000 full-auto “assault weapons” to be used domestically, inside the USA.

Keep in mind that President Obama is on the record saying, “AK-47s belong in the hands of soldiers, not in the hands of criminals; that they belong on the battlefield of war, not on the streets of our cities.”

But it seems he really means they don’t belong on the streets of our cities unless they are in the hands of homeland security enforcers, in which case they can be FULL-AUTO assault weapons. 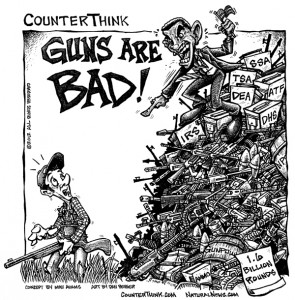 The DHS bid for 7,000 full-auto assault weapons is found by clicking here. The original credit for discovering this goes, to my best knowledge, to Awr Hawkins at Breitbart.com.

In the hands of the government, they’re called “Personal Defense Weapons”

The juiciest part of this bid is the use of the phrase “Personal Defense Weapons” to describe the full-auto AR-15s being purchased by DHS.

Apparently, when YOU hold an AR-15, it’s an “assault rifle.” But magically, if you hand that same rifle to an armed government homeland security enforcer, it instantly transforms itself into a “personal defense weapon.”

The request for bid actually says:

“DHS and its components have a requirement for a 5.56x45mm NATO, select-fire firearm suitable for personal defense use in close quarters and / or when maximum concealment is required.”