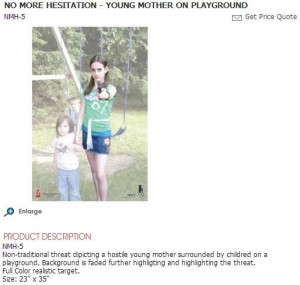 A retired Houston cop believes that the recent production of “non traditional” shooting targets at the request of law enforcement and the government indicates that there is a disturbing ongoing program to desensitize police.

T.F. Stern, writing on his website The Moral Liberal, states that the cardboard cutouts of pregnant women, children, and elderly citizens, for police target practice can only have been created by a “sick mind”, with the intention of having police officers or Homeland Security “goons” completely disregard humanity.

Whether consciously intentional or not, “Maybe it’s the natural progression, a downward spiral of perversion,” Stern states, the result is to have police “feel nothing’s wrong in shooting a pregnant lady or an old man with a shotgun inside his own home.”

The company that produced the images, Law Enforcement Training Inc., even admitted this much, asserting the products helped override “hesitation on the part of cops when deadly force is required on subjects with atypical age, frailty or condition,” and to “break that stereotype on the range, regardless of how slim the chances are of encountering a real life scenario that involves a child, pregnant woman, etc.”

“Law enforcement officers train for the ‘what if scenarios’; robbers, burglars or just ‘bad guys’ in general.” Stern states in his column. “While it is possible to run up against other situations where extreme violence must be confronted, why train police officers… to shoot a pregnant lady holding a gun, an old man with a shotgun inside his house or a young mother on a playground?” the retired officer asks.

“What does it say about the mindset of an entire police department that trains for such an event…trains for it as if it were a common every day event rather than the exception which might happen once in a ‘blue moon’.” Stern urges.

Stern notes, as we did in our original reports, that the images were produced only because there was a demand for them from law enforcement. In our latest article we note that Law Enforcement Training Inc. has racked up contracts worth almost $2 million dollars mainly for “training aids” and “paperboard,” with the DHS over the last three years.

“How will police officers react after they no longer believe they are part of the society which they have been charged with policing, when they have become used to shooting pregnant ladies and old men?” he writes.

“Odd as it may sound coming from an old retired cop, if police recognition skills, the red flags that alert to danger were delayed for a moment, so be it; I’d rather get shot than develop the attitude that all or even most of my neighbors were a constant threat.” Stern further notes.

As we have noted, The story has hit a nerve following multiple accounts documenting The Department of Homeland Security’s purchase of around 2 billion bullets over the last year, which many fear is linked to preparations for domestic disorder.