Perhaps you have seen the loathsome “no more hesitation” target practice sheets (see here, if you haven’t) provided to the Department of Heimat Sicherheitsdeinst by an entity called Law Enforcement Targets, Inc. They depict old men, young mothers, pregnant women – even a little boy. Anyone who has seen these cretinous confections has been dismayed – and outraged. What sort of sick mind would even think to create such things – let alone actually create them? And can you imagine the reaction if someone made shooting targets depicting cops? No doubt there would be two-in-the-morning SWAT raids and probably a Waco-style barbeque of the offenders. 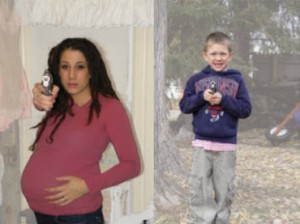 But I’d like to bring up another aspect of this despicable affair that’s just as telling – and perhaps even more dismaying. The same government that hectors the country relentlessly about diversity is apparently very happy with a certain homogeneity when it comes to portraying “domestic extremists” on shooting targets: White older man; white young mother; white grandmother; white little boy.

No diversity at all.

They’ve made this rather explicit.

I’m reminded of something cruel and awful from the past – something many of you who are over 40 may also remember: The Official Running Nigger target. In the ’70s, these were commonly seen at gun stores and elsewhere. Their purpose was to turn black people into things – less than human things – in the minds of people who weren’t black. So as to make it easier to treat black people as less than human. 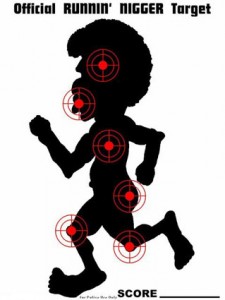 And now, history is repeating itself – only this time, it is white people – in particular, anti-government, liberty-minded white people – who are the “niggers.”

And now, here we are in 2013 – and the government has ordered a bunch of “shoot whitey” targets – and no one seems to have noticed, much less care.

Apparently, people of color cannot be “domestic extremists” – and for them, “hesitation” is still protocol.

One can draw several conclusions from all this:

First, it’s indicative of the racial hatred or at least contempt that bubbles beneath the seemingly placid, even-toned lectures of Barack Obama and Eric Holder. They may not have actually ordered the targets (though who knows? maybe they did) but now that the existence of these targets is public knowledge – and not a single apologetic word has been forthcoming from the executive – we can reasonably assume there is no outrage within the executive. Which is another way of saying, they approve of these things.Because we can fairly assume that had the “no more hesitation” targets depicted pregnant black women and small black kids and black men there would have been an eruption of not merely apologies from the executive but a witch hunt of McCarthyite proportions. Any official of the government remotely involved would not only have been summarily fired, he’d be publicly vilified and perhaps even brought up on “hate crimes” charges. 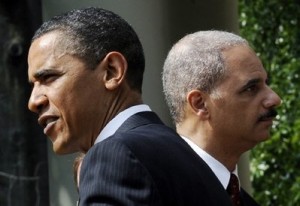 And as Sir Thomas More once pointed out, silence is taken to mean approval.

We have a new Imperial Wizard, it seems. He may not wear a white sheet – but he’s the same sort of person.  A racialist – or a racialist fear-monger. It means the same thing, ultimately.

The government – the Obama government – may simply be using these odious targets for the age-old purpose of divide and conquer. Enrage whites – and egg on their fear/race hatred of blacks. Anything to prevent blacks and whites from thinking of themselves – and one another – as individuals.

Individuals in the same crosshairs, ultimately.

The Utter Failure of the Police