It took “conservative” Republicans to trot out mandatory and market-based health insurance in the same mouthful. 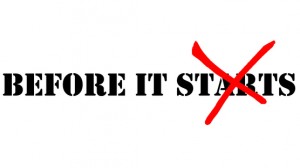 Don’t ever forget to thank them for this.

Well, it’s time for the next step: Mandatory gun insurance –  also “market based” and “incentivized,” of course.

Mandatory gun insurance, he says, would “. . . (cover) individuals whose person or property was in some way injured or damaged as a result of the use of a firearm.”

What Hartwig avoids mentioning is the guns that will be pointed at gun owners who decline to be “covered.”

But why would anyone decline such a valuable “service”? 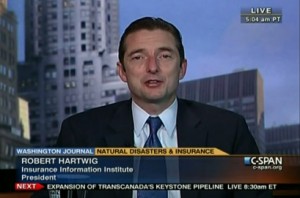 Perhaps so that they can afford to keep the gun. Or even buy one in the first place.

And here we come to the true object of this enterprise: To make the legal ownership of guns progressively more expensive, so that within a period of years, very few people except the affluent elites (and eventually, perhaps not even they) will be able to legally own guns. No registration – or confiscation (as such) will be needed. The public – most of it – will be disarmed via being priced out of the “market” using “incentives” provided by the insurance Mafia. 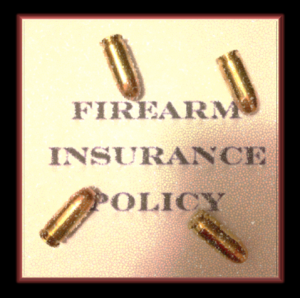 The Mafia would “reward” gun owners who own fewer guns – and levy surcharges upon those who own “too many” guns – or guns deemed “too powerful” or “excessive,” such as those of a certain caliber, or which have magazines that hold “too many” bullets. Conceal carry? Higher risk – you pay more.

It will work in exactly in the same way that the insurance Mafia has made owning powerful cars and motorcycles – especially more than one – financially untenable for most average people. Gun owners who do not keep their guns stored unloaded and /or locked up – and therefore, largely useless for home defense –  will be surcharged into penury. And just as the insurance Mafia is already pushing hard for in-car monitors for drivers, so also will the insurance Mafia push for random checks or in-home monitoring for gun owners – to “make sure” the guns are “kept safe.” Either accept these terms and conditions – or give up your guns.

Or, become an outlaw – subject to potentially years in prison if they ever find out you failed to comply.

Every gun owner will be strongly “incentivized” to become a good little Clover – to do as he is told.

Bet your bippie that Obamacare – brought to you by these same “conservative” Republicans – never forget that – will tie into this. Already, doctors are asking probing questions of their patients: Do you own a gun? The patient is Catch-22’d either way. If he says yes, the doctor – now in cahoots with the government and the insurance Mafia – will jot that information down on the patient’s files – files that are no longer private. Files that are going to be read with great interest by the government – and the insurance Mafia (which amounts to the same thing) because your “health care” is now a matter of public concern – and must be “incentivized” with “market-based” nudges – you know, orders enforced at gunpoint (the guns owned by not-you, of course).

Or, the patient lies and says no. 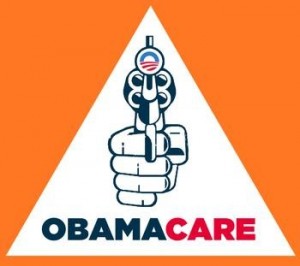 Now he’s probably committed some sort of actionable offense – one must always tell the truth to the government – even though the government rarely retruns the favor and is never obliged to. The patient who fibs to Uncle – his eternal in loco parentis – must live in perpetual fear of Uncle  discovering his fibbing.

Much worse – for the patient – he tells the doctor to piss off and mind his own goddamn business. Patient is belligerent and paranoid; potentially dangerous. Immediate e-mail to Homeland Security. Cue the thug scrum. (This is no exaggeration, by the way. It has already happened to several people. Their doctors narced them out to the insurance Mafia’s enforcers – you know, the police – and “for their safety,” these people’s guns were physically taken away despite their having done nothing to anyone – much less committed any crime. See here and here and here, for openers.)

Don’t just bet your bippie. Bet your ass this is coming.

Efforts are currently under way to get mandatory gun insurance laws passed in the following states: California, Massachusetts, Connecticut, New York, Pennsylvania and Maryland. But the real push will come from Washington – from deep within the reticulated colon of tyranny, soon to issue forth its predictable product.

This is their strategy – and I expect it’s going to work. Because for it not to work, there would have to be a successful challenge of the idea of forcing people to buy insurance, period. Put another way, if it is wrong – or even merely unconstitutional – to force people to buy insurance in order to legally own a gun (even in their own homes) then it must also be wrong to force people to buy health insurance to “cover” their own selves. Or their cars, for that matter. To be compelled to buy any insurance at all – except in cases of property not yet fully paid for, in which case one has the free choice to not buy the property – or to wait until one has the means to do so outright, without taking a loan. 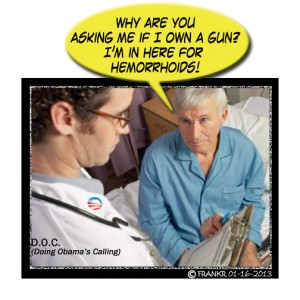 The very idea of mandatory insurance itself must be thrown in the woods.

Do you expect that to happen? The system has already decreed it’s just fine – ethically peachy and legal – to literally threaten to cage people at gunpoint for failing to purchase a health insurance policy. And a car policy. What makes you think they will stop at that?

I don’t think they will stop.

The basic idea behind mandatory car and health insurance has been accepted by most people – to say nothing of the courts. And that is the real problem. If you have to buy car insurance because you might cause damage to someone else’s property (even if you never actually do) then surely you should also be required to cough up for a gun insurance policy. If you have an obligation – enforceable at gunpoint – to hand over money to the health insurance Mafia for “coverage” because you might get sick and might impose “costs on society” – then surely you have the same obligation when it comes to owning a gun.

Who will argue the principled opposite? That it is better to accept that when it comes to any given thing, some people may (indeed will) occasionally behave irresponsibly – and accept the consequences of this (and hold only them responsible for their actions) as the price of living in a free society – than it is to chase the unicorn of a risk-free society and along the way, treat everyone as presumptively irresponsible? To put a finer point on it: To punish the responsible  – the innocent – based upon the actions of the irresponsible and the guilty – in an ever-speeding-up vortex of dumbing-down and its inevitable corollary, the clamping down on whatever freedom of action remains.  A world in which nothing you do or might do isn’t someone else’s business. And theirs, yours. Everyone a prisoner of everyone else – and hating one another for it. 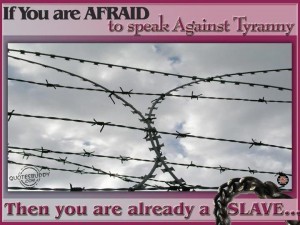 We are well on our way there.

Jefferson characterized the either-or this way: Malo periculosam libertatem quam quietam servitutem. That is: Better freedom with danger than slavery with safety. And even the sage of Monticello  made the error of accepting the premise that slavery can buy safety; it can’t – it never has. Ask the Soviet-era Ukrainian kulaks how “safe” they were under Stalin’s “protection.” Or on a smaller scale,  the 77 victims of  Anders Behring Breivik, all of them living in a legally disarmed, “safe” society that proved to be anything but “safe” for them.

So, here’s our choice.

Either people take a principled stand – and forget the utilitarian arguments – or they will accept what’s coming. They must reject not just the idea of being compelled to purchase gun insurance in order to be “allowed” to own a gun, they must question the whole filthy juggernaut that’s steaming along behind it. The very idea of mandatory any insurance.

It’s as simple – and as complicated – as that.

Government, if it has any ethical justification at all, exists solely to protect the rights of the individual. It is an assault on the rights of the individual to deprive him of his rights before he has done something to justify it. That he – that “someone” – might behave irresponsibly is thin gruel, inadequate to override the fact that he hasn’t yet. Any government that abuses any person’s rights – that punishes any person pre-emptively for things he hasn’t done but which someone “might” – is itself abusive and no longer legitimate.

Our rights are sacred – but we’ve forgotten. Most of all, we have forgotten that there has to be a damn good reason to forcibly deprive any human being of any of them.

Doing so because some other person did something –  or might do something (and thus, “you might, too”) – is an absolute outrage.

And to accept it, a degradation.

Will you accept it?