If you’re new to bikes, you may not be hip to some of the routine checks – and adjustments – that are important to do (and keep track of). 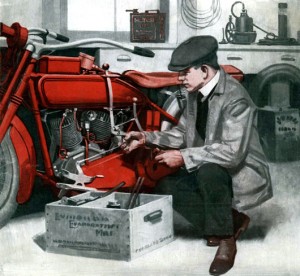 If your bike has a chain, it is important to keep it properly tensioned – as well as cleaned and greased. If you cut wood with a chainsaw, you’ll know all about how an out-of-adjustment chain reduces cutting performance – and about what happens when the chain isn’t kept oiled. The principle is the same with bike chains. At least once a year, the chain (and sprockets) should be inspected and the tension adjusted, if need be. A service manual for your machine will give you the procedure – and the spec. Typically, there are adjusters on either side of the rear wheel that can be backed in (or out) to achieve the correct tension. This job is very simple and you can save time as well as money by checking/adjusting yourself. 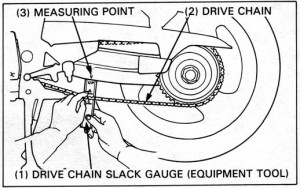 The chain should also be cleaned and then lubricated about once a year – though possibly more often (or less) depending on how many miles you ride and whether you ride in the rain and so on. See your owner’s manual or the paperwork that came with the chain to determine what type of lubricant you ought to use; the chain can be cleaned by soaking it in diesel fuel or another appropriate product – but never use gasoline.

Don’t forget to check the sprockets for signs of wear – you’ll be able to tell just by looking at them, no tools required. If they’re worn, replace them. Usually, you’ll only need a wrench or socket to unbolt them/bolt the new ones on. Easy. 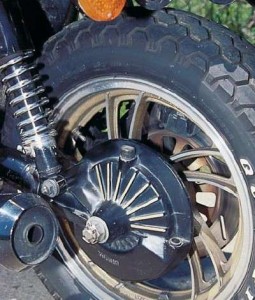 If you don’t have a chain – or a belt – then you’ve probably got a shaft drive bike. These units are easy to ignore because there’s not much to see. So, people often neglect them. But take a look around the rear housing and you will see a large (and a small) bolt, one higher up than the other. These are the drain – and fill bolts – for the gear lube that’s inside the unit. If the bike is new, don’t worry about it until the specified time/mileage interval comes around . But if you’ve bought the bike used, it’s a very smart idea to check – and change out – the gear lube right away. The level might be low (from seepage) and/or – much worse – the lube might be really old. Shaft drives are – usually – very reliable. Provided they are maintained properly. That means making sure the level’s right – and regular gear lube changes, once every 2-3 years or so.  Most shaft drives take less than a quart of gear lube – some just a pint or so. Just remove the drain bolt, let the old fluid out, reinstall the bolt – and refill the case through the fill hole – usually, just to the lip of the hole, or to the point that fluid drips out. A bonobo with a crescent wrench can handle this one. Just be sure to use the correct weight/type of gear lube specified by whoever built your bike. The info should be in your owner’s manual – and may be marked on the side of the shaft drive case itself, probably near the fill hole.

Also look for a grease fitting on the shaft drive case; it’s typically ahead of the rear hub. Shoot some grease in there with a grease gun – being careful to clean the nipple off first, before you push the grease gun onto it. 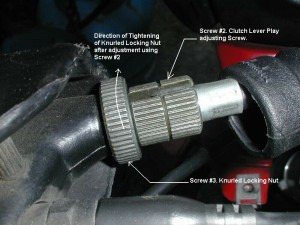 Modern bikes have hydraulic-assist clutches, but if you have an older bike with a cable, it’s important to periodically check/adjust the play. Otherwise, clutch engagement may be too weak – or too tight. It will be harder to operate the motorcycle smoothly – and it’s possible you could prematurely wear out the clutch. Don’t make the beginner’s mistake of just loosening the locknut/adjuster wheel at the lever and backing in (or out) only the threaded fitting at the clutch lever.  This is not the correct procedure.  Typically, you will have to make several other adjustments first – often starting with the adjuster/locknut at/near the middle of the cable and possibly also where the other end of the cable connects to the clutch engagement mechanism within the engine itself. You will want to consult a shop manual before touching anything. Do this right – or do not do it. But, do it – or get it done. It’s not difficult to do it yourself – all you need are some hand tools (wrenches and screwdrivers; a basic socket set) the manual – and patience.

Clutch play should be checked – and adjusted, if need be – once a year at least. 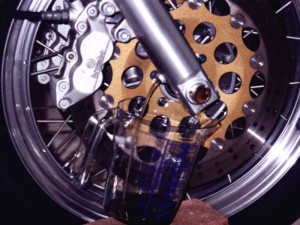 Everyone knows about engine oil – and the need to change it on a regular schedule. People sometimes forget (or don’t realize) that a bike’s fork oil needs to be changed, too – and for similar reasons. It gets heat cycled – through the up and down action of the forks – and this (over time) degrades the oil. Which can lead to gunking up the internals, which can lead to problems you don’t want – and which can be  avoided by regularly draining and refilling the forks with fresh oil. Doing this will also probably help the fork seals last longer – which is desirable, because replacing them when they start to leak is a hassle (requiring – usually – partial disassembly of the bike’s front end).  The drain/refill procedure for your specific bike will be something you’ll need to look up (get a shop manual) but – usually – it’s just a matter of removing the drain bolt/screw on the lowers, then pumping the front end up and down to purge out the old oil. Then, you remove the cap on top of each fork tube – and refill with the right type/quantity of fork oil.

It’s a good idea to do this little job once every three or four years. For those interested in some more detail, here’s a story on the subject I did a few months back. 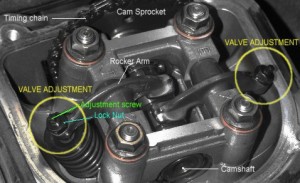 This is a job that’s not routine with car engines – most of which have “set it and forget it” valvetrains that never require adjustment for the life of the engine – but which is routine with bike engines. Especially high-performance bike engines.The gap between the camshaft and the valve stem tip must be a certain specified value – not too much and not too little. Over time – as a result of use – the gap will change and must be adjusted back to the specified value. Many late-model high-performance motorcycle engines require that valve clearances be checked every 7,000-10,000 miles or so. Fail to do this – or get it done – and you risk both excessive/premature wear as well as reduced performance. This is not a job, unfortunately, for the novice. Special tools – and some experience digging into engines – are necessary. If you don’t have both, it’s probably smart to take the bike to someone who does. Ideally, find a friend who can show you how.

And, be advised:  Because this job is not basic – and because it isn’t cheap to pay a dealer to do it – it often isn’t done. So, if you’ve just bought a used sport bike – or any bike that has an adjustable (needs adjustment) valvetrain – check it or get it checked. Do it now (cue Ahhnoold voice). It’s not something you want to assume was done.