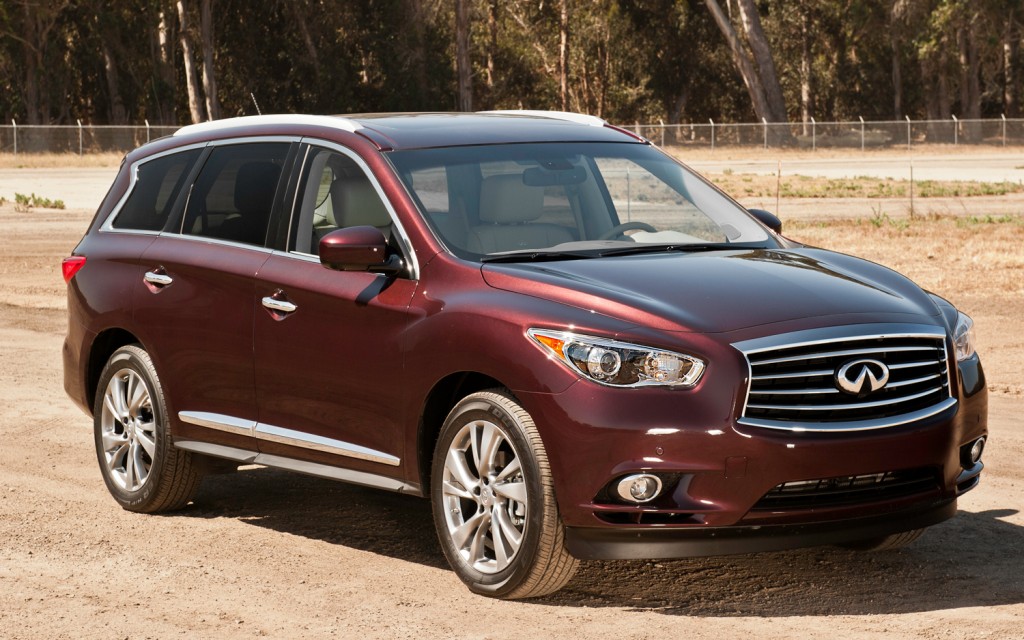 No car salesman ever wants to find himself admitting to a customer that he just hasn’t got what they’re looking for . . . but the guy down the street does. 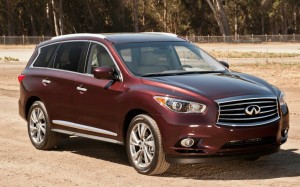 Before the introduction of the JX35, that was exactly the situation Infiniti salesmen – and dealers – were in. There was the Q56 – for people who wanted a full-size SUV with three rows of seats. But what if you wanted the three rows – but not the full-size SUV?

The next-down model in the Infiniti lineup was the much smaller (and five passenger-only) FX.

The JX gives Infiniti a vehicle that can go heads-up against the very successful Acura MDX and also newcomers like the Buick Enclave – and which straddles the gap between the too-big-for-some Q56 – and the too-small-for-others FX. 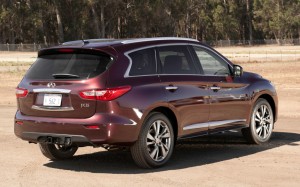 The JX35 is a full-size/three row luxury crossover, available in both FWD and AWD verisons. It’s based on the Nissan Murano – but much larger and fitted out with every tech-lux gadget Infiniti’s got in the bin.

The JX is a new model, just added to Infiniti’s lineup. 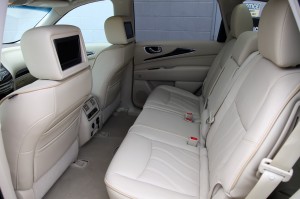 More room inside for people than the QX – but not as large on the outside as the QX.

A pretty decent deal – relative to most of the others in this segment.

Some controls are poorly located/hard to operate. 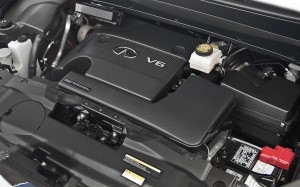 For now, the JX comes only with a 3.5 liter, 265 hp V-6 paired up with a continuously variable (CVT) automatic and either FWD or a full-time AWD system.

Some have criticized both the power and the performance of the JX’s drivetrain, but both are par for the segment. 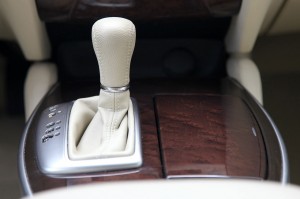 Mileage-wise, the JX comes in at 18 city/24 highway for the FWD version and 18/23 for the AWD-equipped version. I averaged 20.5 during my week long test-drive.

One area the JX comes up noticeably short is towing capacity. This full-size crossover only pulls as much as a typical mid-sized car: 3,500 lbs. That’s adequate for small single axle trailers. But if you need more capability, the others offer more. In the case of the Q7, a lot more – 8,500 lbs., which is in the same ballpark as V-8 pick-ups and SUVs. The Acura MDX and Lincoln MKT can pull a decent load, too: 5,000 lbs. for the both of them. Ditto the Enclave, which has a max rating of 4,500 lbs. 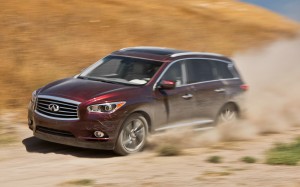 Some reviewers have criticized the J for not-so-hot acceleration. I’ve already pointed out that, in fact, it’s at least as quick as most of its price-equivalent competition – and quicker than some of them.

But perhaps the most standout characteristic is not so much the engine – but the CVT automatic transmission it works through. It is turbine-smooth, yet also capable of mimicking a conventional “stepped” automatic – as when it seems to shift gears during full-throttle acceleration. Most CVTs will let the engine rush right up to redline – or very close to redline – and just hold the engine there, for as long as you hold your foot down. It’s not just that it’s noisy – it sounds like something’s broken – or may be about to break. The J’s CVT doesn’t sound like that – because it doesn’t operate like that. It lets the engine rev, then does a perfect imitation of a conventional automatic upshift to the next “gear” – which in fact is just a different CVT pulley ratio. But it could fool almost anyone insofar as how it feels – and sounds. The benefit? You get the superior efficiency of a CVT (relative to a conventional hydraulic-actuated automatic) without the thrashy sounds/sensations typical of CVTs. Nissan (Infiniti’s parent company) makes the best CVTs in the business. Drive the J (or any other Nissan/Infiniti vehicle with a CVT) and you’ll see what I mean. 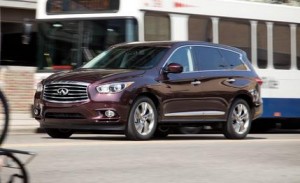 Ride: It’s medium-soft. The Enclave is softer – and the MDX is firmer. As such, the J is a good middle-ground choice. There’s a “sport” setting on the console – but it’s more for the drivetrain (throttle tip-in, transmission shift points, etc.). The other two modes – Eco and Snow – alter the calibrations for those conditions.

One interesting thing about the J that I have not encountered in any other vehicle – crossover, SUV, luxury car, sedan or any other kind of car – is its “in the background” traction/stability control. When it comes on, you may feel it – brakes being applied, throttle being dialed back – but you will not see it. The “trac” light does not flash furiously when engaged – as it does in every other traction/stability-controlled vehicle I have ever driven. This is calming. The car’s systems intervene when they need to – but don’t make a federal case out of it. This is of a piece with the J’s lack of a Belt Minder buzzer. The car will not do the electronic equivalent of beating you over the head with a ruler if you have elected not to “buckle up for safety.” As far as I have been able to determine, Nissan/Infiniti is the only major automaker that doesn’t foist a Belt Minder buzzer on you.

But, how does the J compare with other large crossovers? 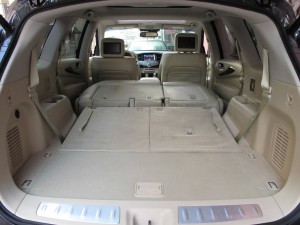 It beats the MDX, second row-wise (38.7 inches) by a significant margin and edges it out by about half an inch up front (41.2 inches). And it really beats the Enclave, which has just 36.8 inches of second row legroom (and 40.4 inches up front). The Audi Q comes in just under par, with 39.6 inches up front and 41 inches in the second row.

Only Lincoln’s MKT wagon edges out the J when it comes to second row spreadin’ out space – and only by a hair, literally: 41.8 inches. And the MKT’s down about half an inch up front, vs. the J.

But, no free lunches in crossover land. The J’s edge in passenger roominess comes at the price of reduced cargo capacity – 15.8 cubes behind the third row, which is considerably less than several of its rivals, most notably the Buick Enclave (23.3 cubes) and also the MKT (17.9 cubes). 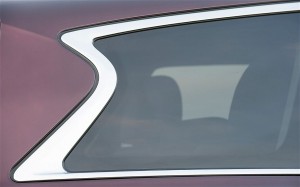 However, the J still has a slightly bigger cargo area than the Acura MDX – which has 15 cubic feet of capacity available behind its third row.

Speaking of the third row. It’s got adequate legroom but – as is true of the third rows in all these crossovers – headroom is limited by the slant of the roof and by floor height. Adults consigned to the third row will sit in a half-fetal. Not totally tucked in, but halfway there. This is an area where a full-size SUV like the Q has an advantage – at least in terms of headroom. The usually boxier/taller profile allows for that. 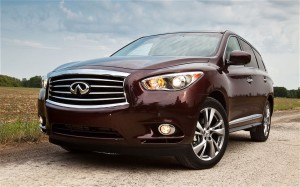 As far as aesthetics: That’s in the eye of the beholder, but to my eyes, the J’s nose is a bit ponderous and super-sized guppy-like. The side and back views are “cleaner” – and I applaud the for-once different (stylized “S”) rear side glass shape.

The inside is a winner. All the superlatives: luxurious, sporty, tasteful. Very “rich” looking – but not Donald Trump rich looking – if you know what I mean. The only thing I find fault with is the location of some of the secondary controls – such as the buttons that turn on (and off) the lane departure warning system, traction control and steering wheel heater. These are all located almost underneath the dash, to left of the steering wheel – and recessed such that you can’t easily see the individual buttons. After a week or so in the J, you know where the buttons are by feel – and memory. But it’s not ideal – and may be off-putting to people who haven’t yet spent a week in a J.

Technological highlights include Nissan/Infiniti’s unique “around view” monitor – which gives you a panoramic, 360 degree view of the vehicle from the perspective of someone looking down from above. It is much more helpful than the limited view of your surroundings you get with the typical rearview-only back-up camera.  The twin LCD flatscreens built into the seatbacks – included with the Theater Package – can be tilted up or down to adjust for sun glare. There is an available semi-automatic blind spot braking feature, too. The system will apply the brakes if it senses you inadvertently turning into the path of another vehicle that’s in the J’s blind spot. 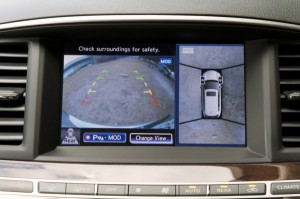 However, many of these options are bundled together in packages – some of which are very expensive, even for a luxury vehicle. The Premium Package – which includes hard drive-based GPS, a 13 speaker Bose stereo, the Around-View monitor, Blind Spot Warning and several other items – stickers for $4,950. The Deluxe Touring Package – which adds 20 inch wheels, an even higher-end Bose system, heated second row seats, rain-sensing wipers and maple wood interior accents – goes for $2,550. To get certain features, you not only have to buy the package, you sometimes have to buy several packages. For example, to get the Deluxe Touring Package, you have to also buy the Theater Package – and the Premium Package. But you can’t buy both the Deluxe Touring Package and the Driver Assistance Package. 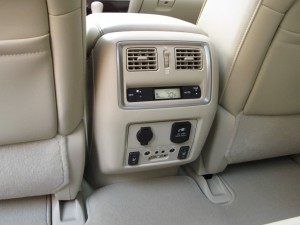 There are two reasons for this confusing (and costly) mish-mash: One, it’s easier for Infiniti to produce cars this way, as opposed to allowing buyers to order options on a more a la carte basis. Two, there’s more potential profit per car. As an example, my J test car – which remember, has a starting MSRP just over $41k – stickered out over $55k, once the additional cost of all the options (Technology Package, Theater Package, Deluxe Touring and Premium Package) was folded in.

Infiniti-minded buyers interested in not-too-big – but not too small – will be pleased to discover there’s now a model at Infiniti stores that meets their needs. 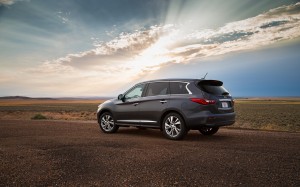