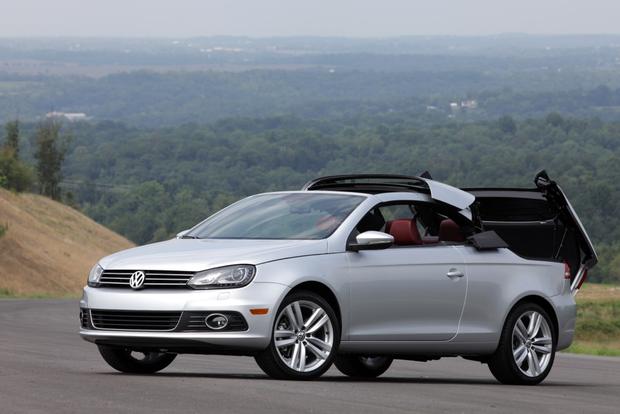 You can look at the VW Eos from two diametrically opposed viewpoints. The first – favorable to VW – is that the Eos is a steal of deal compared with a BMW 3 coupe. Both are spiffy European-brand sport coupes with folding metal hardtops and all the bells and whistles – but the BMW starts at $47,600 while you can buy a new Eos for $35,195. Even a top-of-the-line Eos Executive, at $41,695, doesn’t come close to the BMW 3 coupe’s base price – yet both cars are similarly laid out and deliver a comparable open roof – or not – driving experience. 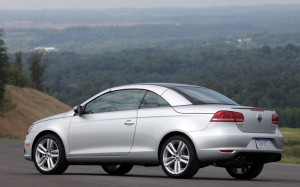 On the other hand, the Eos is old. It was introduced in 2007 – and hasn’t changed much since then.

It’s also not been a strong seller for VW – and may be discontinued. Or profoundly changed next year (or the year after that). And that, in turn, could gimp resale values of the current model.

The Eos was launched at a time when Volkswagen was trying to reposition itself as an upscale brand more or less in the same league with cars from Audi, BMW and Volvo.

But the problem with that concept is that a VW isn’t a BMW – and convincing enough people to shell out BMW money for a VW has proved to be tough. 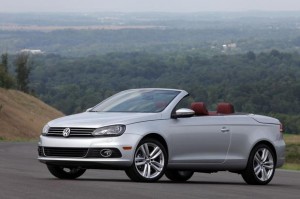 Still, there’s a lot to like about the Eos – if you can get around the status issue. There aren’t many retractable hardtop coupes out there – and virtually none that are both German-made and which can be bought for about $35k – if you go easy on the options.

The Eos is a mid-sized, four-seater retractable hardtop coupe. 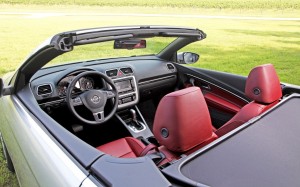 The Lux trim has been dropped, simplifying the lineup.

Retractable hardtop looks and feels more solid than a fabric top and provides more protection from the weather – and thieves – than soft-topped competitors.

Luxury-car finish,materials and attention to details. 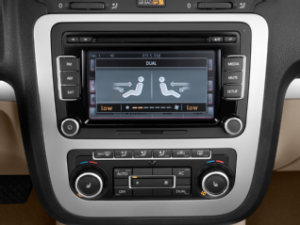 The formerly available 3.2 liter V-6 has been disappeared. 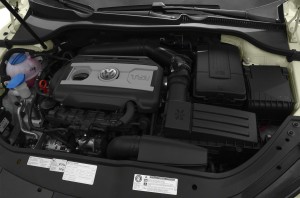 Volvo’s C70, though, is probably the more direct – and thus, fair – comparison when it comes to drivetrain layout, because it’s FWD like the EOS and not RWD like the BMW. 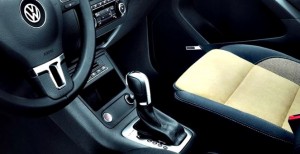 It comes standard with a 2.5 liter in-line five and 227 hp. Being a bit larger – and several hundred pounds heavier (3,837 lbs. vs. 3,508 lbs. for the Eos) it is also considerably slower. The C70, despite its premium car price tag, delivers an economy car 0-60 run in the low 8 second range. This can be remedied somewhat by opting for the available Inscription Package, which includes a 250 hp version of the Volvo five – but even then, the Eos is still quicker. And the Volvo’s a lot more expensive.

VW recommends premium unleaded to get the most performance (and mileage) out of the 2.0 liter engine, but doesn’t require it, so it’s ok to use regular if you want to save a few bucks and don’t really care if your engine is making max power at all times. 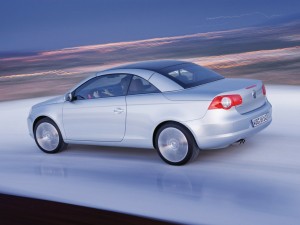 The Eos has the heart of a GTI but lags a few steps behind in the 0-60 race because of its greater curb weight, courtesy of the retractable hardtop.

Still, the car’s not slow.

No signs of strain accelerating from a stoplight or merging with traffic. It is a pleasant driver, with the turbo’d two providing good low-end torque in stop-and-go driving and also high-speed power when you punch it.

The issue for the Eos will be the inevitable comparisons with the power/performance of cars in its price range like the $36,900 BMW 128i convertible. Granted it’s a soft-top. But it comes standard with a 230 hp six-cylinder engine that delivers 0-60 in a more price-appropriate 6.7 seconds. 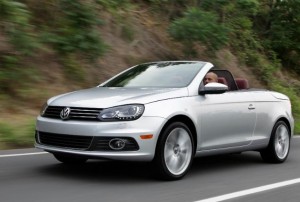 The Eos is caught in quandary. It’s not really a sporty car – it’s too heavy and it’s not packing enough heat under the hood. But many buyers are going to make comparisons with similarly priced – and sportier/better-performing – models like the BMW 1. On the other hand, Leisure World cruisers like the new Chrysler 200 deliver comparable sunny Sunday afternoon driving enjoyment – at a much lower (to start especially) ) MSRP. Meanwhile, the Volvo C70 delivers a similar retractable hardtop experience, more interior space – and upmarket brand status – for not all that much more money than you’d pay for an optioned-out Eos.

If the Eos could be ordered with something along the lines of the 256 hp version of the 2.0 liter engine that’s standard in the current Golf R, then it would  sporty enough to face down the BMW1, clean the Volvo’s clock and – perhaps more to the point – its pushing $40k price tag would go down a lot easier.

This is just my humble opinion, but I think 200 hp is too close to economy car hp. It invites comparisons VW probably would probably like to avoid.

Whether people actually use the power is largely irrelevant. It’s a question of feeling good about what you just spent a wad of cash on. And people who spend $35-$40k on a car want to know they can outrun people who spend $22k on their cars – even if they never actually do it.

I also mourn the loss of the formerly available six-speed manual. The now-mandatory DSG is a technological marvel and does its job superbly. But it is less fun. And isn’t a car like this about having fun?

A big problem for the Eos is its curb appeal – its attention-getting ability.

It doesn’t have much.

As with the Engine Issue, people who spend this kind of money generally want something more than run-of-the-mill. They want to be noticed. Or more precisely, they want people to notice what they’re they’re driving. But the Eos is a wallflower. With its almost seamless retractable hardtop in place, it easily fades into the crowd. When the similarly Shy Guy Pontiac G6 retractable hardtop was still around, VW had the edge as a nicer-than-Pontiac alternative. But given what you can get for $35k today – for a lot less than that, if you are ok with a soft-top rather than a retractable hardtop (see, for example, the spiffy little Mini Cooper convertible – just $25,150 – or how about a new Camaro or Mustang convertible? The Fiat 500 ragtop? Etc.) the Eos doesn’t really have anything obviously spectacular to counter with. 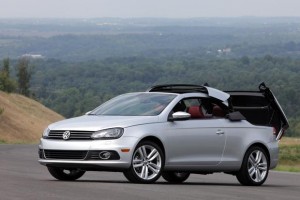 And it ought to.

Yes, the retractable hardtop is neat – especially the fact that it also has a power sunroof built in that you can use to let in some sun and breeze when you don’t feel like dropping the entire top. But what else is there? Take the retractable hardtop out of the equation and what are you left with that justifies spending $35-$41k?

And when you do drop the top, the trunk goes away. Literally. Small to begin with (10.5 cubic feet with the hardtop up) it shrinks to 5.4 cubic feet when the top is folded. 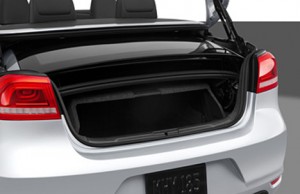 The Chrysler 200, meanwhile, has a 13.1 cubic foot trunk; the BMW has 9 cubic feet. The C70 slots into the middle with 12.8 cubic feet of cargo capacity. None of these have huge trunks, but they are at least cargo-viable.

On the upside, the Eos does have usable back seats – a feature that many (cough) “two-plus-two” convertible coupes like the Camaro and Mustang don’t have.

Second row legroom is decent: 32.5 inches vs. 31.9 for the BMW 3 retractable hardtop. Interestingly, the significantly larger (on the outside) C70 is only slightly roomier inside, with 33.9 inches of second row legroom.

But the Chrysler 200’s 33.5 inches in back is a counterpoint against the Eos. 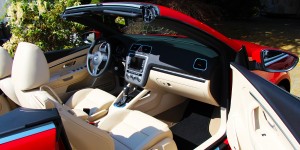 The materials used and detail items in the Eos are – and should be – noticeably nicer than in other, lesser-priced VW models like the new Jetta, which VW recently redesigned to be less expensive than it used to be – in order to make the car more competitive – a tacit recognition that previously, it wasn’t. Or at least, was less competitive than it needed to be for VW to make adequate money off the deal, anyhow. 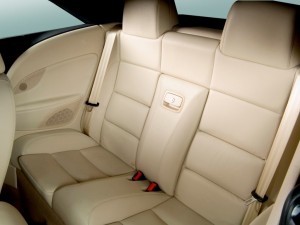 I suspect that when the Eos is redesigned – if it’s redesigned – it’ll either be Jetta-ized (i.e., made more price-competitive with stuff in the under-$30k class) or its content – under the hood, especially – will be brought up to spec with the current par for cars with sticker prices in the $35-$40k range.

I think, personally, that the car lacks focus – not goodness. It’s not that there’s anything wrong with it. It’s just that there’s not enough to excite people about it. This could be done in either of two ways.

One, offer more performance – and “fun to drive.” Put an optional higher hp engine back in the lineup and make it available with a manual transmission. People love the Golf R. How about that concept with a retractable hardtop?

Two, make it affordable – and sell more of them.

I enjoyed driving the Eos. But would I pay what they’re asking?  Uh, no. But if this car cost say $28k rather than $35 to start, I’d bet a lot more people would be interested. VW would have the only affordable retractable hardtop in town. It would be directly competitive with all those soft-tops in the $30k (and less) price bracket – rather than be trying to compete with status-brand retractable hardtops in the pushing (and exceeding) $40k price bracket.

Put simply, it would be a value. A deal. 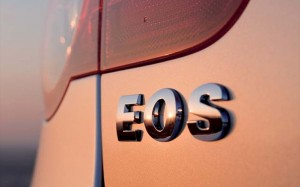 VW might not make money on each sale – but the halo effect might be worth it. Chevrolet reportedly makes no money selling Corvettes. But Corvettes help Chevy sell a lot of Malibus and Impalas.

Odds and ends: As in most German cars, the Eos has top-drawer seat heaters that can actually get hot as opposed to tepid. You will appreciate this when your back’s sore – or the weather’s cold outside.

The top drops at the touch of a button; well, the pull of a handle located on the center console, just below the armrest. The same pull handle also slides and opens the integrated sunroof.

The paintwork is beautiful – including the door jambs and trunk underside. I continue to be shocked by the number of not-inexpensive cars that cheap out on this – that have no clear-coat on the not-immediately visible areas, such as the underside of the trunk and hood and even the door jambs. It looks like scheisse – all to save probably no more than $20 per car during manufacturing. 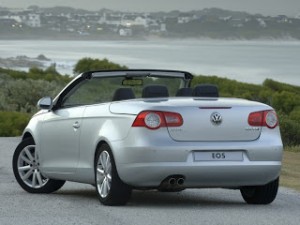 To its credit, VW does not cheap out on the paint.

If you’re careful about the options – and haggle yourself down from the MSRP – the Eos can be a good buy relative to a 328i or C70.

I just wish it were a better one.