A cop in Arkansas allegedly tasered a woman after she refused to show him her breasts. 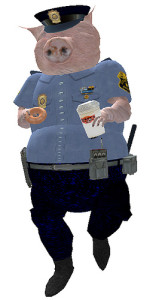 Ashlea Bennett alleges that uniformed Officer Brandon Carter strutted into her place of work on Dec. 13, 2011, and ordered that she give him a sneak peak of her bosom.

When she declined, he reportedly then chased her around the building before zapping her repeatedly with his electroshock gun.

Bennett, who says it was not the first time Carter had asked her the lewd question, is now suing him and the city of Haskell in federal court.