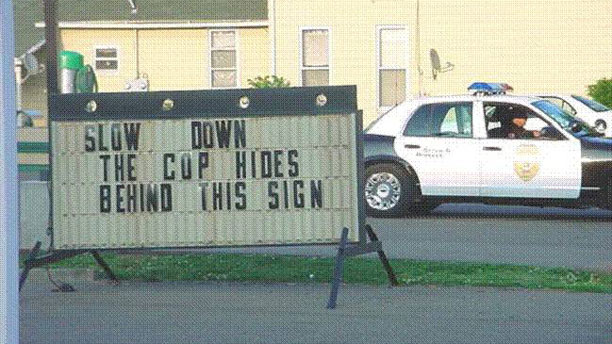 Ron Martin of Frisco, Texas says his goal is the same as that of police: To encourage safe driving. But the cops’ goal, of course, is different. Their goal is revenue collection. As much of it as possible. By any means possible. “Safe driving” is the window dressing – nothing more. 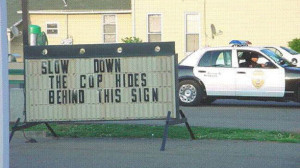 Martin was arrested by Frisco police (news story here) for warning motorists of a radar trap down the road. “Police Ahead” read his sign.

Cars slowed down – before they got to the trap. Before they could be issued payin’ paper. That they slowed down – what we’re told the cops’ desire most of all – mattered not at all.

What mattered was that Martin cost them money. And that could not be tolerated. Hence, the cuffing and stuffing.

It was punitive, pure and simple. Martin caused no harm, threatened no harm. Except of course the harm he caused to the quotas and balance sheets of the Frisco police. 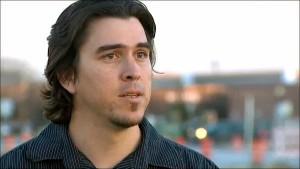 He committed the same “crime” committed by people who flash their headlights or use a hand gesture to advise fellow motorists of the presence of pork.

If cops were really motivated by safety rather than money, they’d not only have no issue with what Martin did, they’d emulate what he did. They could use their mere presence to get people to “slow down.” They’d want to be seen.

If it gets people to “slow down,” isn’t that enough?

The fact is, cops hide behind bushes with their radar guns at the ready in order to make sure you don’t slow down – not before they can issue you a ticket, that is. In a very real sense, they want you to speed – so that they can catch you doing it and make you pay for having done it. Hence all the sneaking around. The unmarked cars. The cops riding incognito in big rigs. The artfully designed cut-outs along almost every Interstate designed specifically to obscure the presence of a cop from approaching traffic.

Dirty pool, Gomez Addams would have styled it. 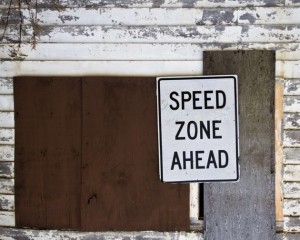 But it’s the cant that accompanies it that’s insufferable. The meretricious song-and-dance routine they – and we, their victims – are forced to act out. They pull us over, knowing it’s all about the money and just another quota fulfilled today, but nonetheless the obligatory sermon about “speeding” and “safe driving” must be delivered. We, for our part, feign agreement. Express dismay – and regret – for having somehow been so feckless, so careless, as to have exceeded the sacred limit. All the while despising the cop as much as he despises us. 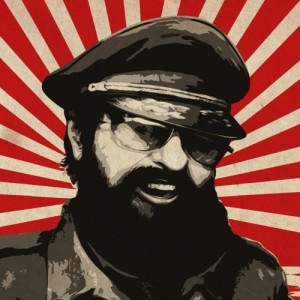 At least in Third World countries, the theft is honest. A costumed goon – usually of a much nicer sort, incidentally – may stop you for literally no reason at all, or an obviously trumped-up one. But all he wants is your money – and (bless him) doesn’t try to pretend otherwise. You hand over a $20 (maybe a $50 – it’s probably gotten more expensive South of the Border since I was last there) and that’s it, you’re done. No patty caking about “safety.”

They call this the mordita – the little bribe.

Infinitely preferable to the colossal fraud we have to deal with here.