The wise mechanic says: Avoiding the need for repairs is the best way to save money on repairs. Here are a few tips and tidbits along those lines: 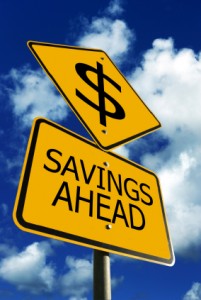 * Idle it with the clutch out –

Want to do your manual transmission a favor? When you first start the car in the morning, ease the clutch out right after you start the engine – and put the trans in neutral (keeping your foot on the brake pedal, obviously). Why do this? With the engine running and the clutch out, the transmission is engaged (connected to the engine) and the gears inside are turning – which will coat them with fresh lube and also speed their warm-up. This will reduce wear and tear and improve driveability on cold days. Also, it will take pressure of the clutch/pressure plate/pilot bearing – which should increase the life expectancy of those parts. Even when the car is fully warmed-up, try to avoid prolonged periods of clutch disengagement. When you roll up to a red light, put the trans in neutral and let the clutch out until the light goes green – and it’s time to get going again. Don’t sit at the light for five minutes with your left foot pressing the clutch to the floor. 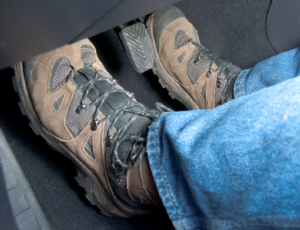 Your car will thank you for your consideration.

If you have a vehicle that sits for weeks at a time without being driven, you might want to look into a disconnect switch for the battery. This lets you “turn off” the battery, without having to do more than pop the hood and turn a knob/handle (the one you installed on the battery’s cable terminal). If you don’t do this – and there’s even a slight current draw from the car’s systems – the battery will likely be be either dead or low next time you use the car. Dead will be obvious, but low will not be – for awhile. However, over time, your battery’s life will likely be cut short. Excessive discharge-recharge cycles are the reason why. Maintaining a battery at or close to peak charge is one of the keys to long battery life. And could save you a tidy sum in premature $100-plus replacement batteries.

You’re supposed to make sure a grease fitting is clean before attempting to shoot fresh grease in – otherwise you’ll also shoot some fresh dirt in, too. A simple – and cheap – way to keep grease nipples clean (and free of rust) is to slip a rubber vacuum cap onto the nipple after each servicing. You can buy vacuum caps for next to nothing at most any auto parts store. Find the size you need – and buy a handful. Next time you’re greasing the ball joints, slip a cap onto the nipple after you’ve finished. It’ll keep crud off the nipple – and make the next time that much easier. This also works well on threaded shock absorber studs, too. By covering up the threads, you’ll have a much easier time turning out the bolt next time you need to replace the shocks – because the threads won’t have rusted up as badly. Maybe not even at all. 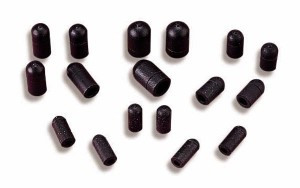 * Use a syringe to suck out brake/clutch reservoir fluid –

Most modern cars with manual transmissions have hydraulic-assist clutches, with a small reservoir of fluid (brake fluid) that should be periodically changed out. And of course, all cars have hydraulic-assist brakes, with another reservoir of fluid (also brake fluid)  that should be periodically changed out. If you don’t do this, the fluid gets contaminated/degrades – and that will eventually lead to expensive problems. You can change all the fluid at once, by bleeding the system – but this may require tools/skills you haven’t got – in particular, if the car has anti-lock brakes (ABS). 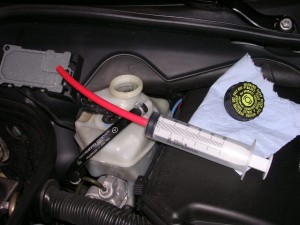 But if you have a syringe and a catch can, you can remove a third to half or more of the fluid without removing a single bolt or using a single tool. Just open the top of the reservoir and draw out fluid – being careful not to expose the little holes at the bottom of the reservoir (or you’ll let air into the system and then you will have to bleed the entire system). Then top off with fresh fluid to the proper level. If you do this a couple of times (takes about five minutes per time) you’ll have effectively replaced most of the fluid within the system.

It’s an almost no-cost, no-tool and no-skill way to keep brake/clutch fluid reasonably fresh without having to actually bleed the system – or pay someone else to do it.