A reader – several readers – express their sense of hopelessness. That 1930s Germany is replaying itself out right before our eyes – and that most Americans either don’t see it or don’t care. One reader put it as follows: 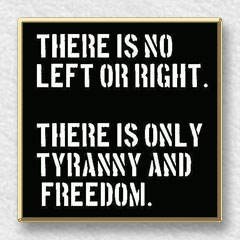 “I wish I had some faith in all of this but history isn’t kind to it. My prediction is that a few of you will be made examples which will be splashed all over the media, 99.9 percent will do as they are told, and the rest will merely hide/bury their guns for another day . . . which never comes. California already made the SKS (rifle) illegal retroactively and all the owners meekly handed them over. This won’t be any different. It is to easy to go to work, make another deal with the devil, and hope that nothing worse happens … but it will. The cattle cars will next and you won’t resist those either. Your neighbor will be called a terrorist but you won’t care because he always was a little funny, kept putting leaves in your yard, and most importantly it isn’t you….”

It could certainly go that way (as history so depressingly shows us). But it could also go a different way. I suspect it will. In fact, I submit that we already have evidence that it is going differently.

For one thing, a lot of people are  already wake – and more are waking up every day.

In percentage terms, the numbers are small – perhaps 5 percent of the population is comprised of people who reject the state – organized violence – in principle and who adhere consciously to the Non-Aggression Principle (NAP). However, that 5 percent is also millions of people. Now consider that there are tens of millions more gun owners who are frightened by – and angry about – what’s going on. Who are beginning to comprehend that a right that matters to them is under siege – and thus, inevitably, they are beginning to appreciate that all of their rights (and by necessary implication, the rights of others) are also under siege. They are beginning to get it. And their numbers are increasing at a geometric rate. Witness the eruption of rage in New York. The widespread and public utterances of defiance.  (See here and here.) Even the cops – some of them, at any rate – are coming out openly on the right side. Our side. (See here.)

It is unprecedented – and thus, heartening.

If even 10 percent of these waking-up Americans  join the cause, that’s an army of tens of millions of people.

Armed, determined people. Who realize what’s at stake – that is, everything. And who are therefore prepared to go to the mattresses over it, if need be.

And it is an important difference relative to the situation of Germany – and Germany’s Jews and other soon-to-be-victims – in the 1930s. 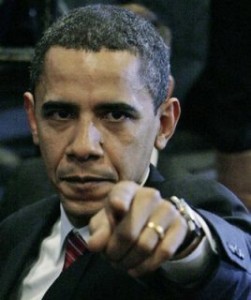 The Jews and other non-Nazis of 1930s Germany were – largely – naive civilians; typical “liberals,” in modern parlance – people who didn’t reject the state (organized violence) in principle. In fact, most of them embraced the state. They were socialists or social democrats or communists… in other words, authoritarians of one type or another. They did not question the essential thing – the lawful violence that is the state. Most of them accepted it. This is what blinded them to the inevitable result of the NSDAP and Adolf Hitler. They could not see the trains to Auschwitz.

The same, arguably, was true of Americans in the 1990s. Back then, most people still accepted as legitimate what the government did – or at least, much of what it did. Most people did not see that what was done at Waco – and Ruby Ridge –  could be happen to them, too.

The oven-fodder of Germany had their epiphany about state violence when it was already far too late. We, on the other hand, have the benefit of foresight. We know – intellectually as well as in our gut – what they are up to; that the state is not a benevolent force. That it is an evil force.

That it is force – period.

The importance of this cannot be over-stated. 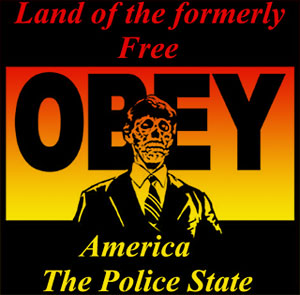 Millions of Americans are already armed. Not with merely with small caliber revolvers and shotguns, either. Check Winn Dixie Ad and Lowe’s Ad. Hence the hysteria – of the Piers Morgan/Diane Feinstein/Chuck Schumer axis – about “assault weapons.” Germany’s doomed did not have sturmgewehrs – or know how to use them. Millions of Americans have “black rifles” of one type or another – and do know how to use them. Combine this fact with the above fact – the growing awareness about the nature of the legalized mafia that goes by the name, “government” – and you have a hornet’s nest that the Morgan/Feinstein/Schumer axis would be ill-advised to hit with a stick.

This realization may have already begun to penetrate their heads – and given them pause.

Another very important difference: The United States military is not – yet – the Deutsche Wehrmacht. Or more importantly, the Reichswehr – what the German army was before it became the Wehrmacht. It is an important distinction. Hitler had the support of the Reichswehr. Its officer corps believed in Der Fuhrer. I do not believe that Barry Obama enjoys such support. And more importantly, I do not believe the soldiery supports the new regime. Yes, many will salute – then submit – and attempt to force us to obey. But there are hundreds of thousands of active duty military and police who will not. (See here, for instance.) And there are millions of veterans who will not. These millions will add their numbers to the millions of civilians who know they must draw the line, here and now – or consign themselves and their children and perhaps their children’s children to the same fate that awaited Germany’s vaporized millions. 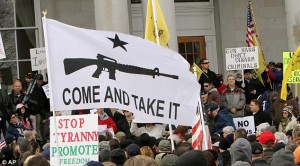 And this is why you cannot find a “high capacity” magazine at any price, anywhere. Why the shelves are swept clean of ammunition. Why those dread “black rifles” are worth their weight in gold… if you can even find one. Previous generations of victims failed to arm themselves because they did not appreciate the nature of the gathering storm. Neither did most Americans as recently as the 1990s – the last time the government went after “black rifles.” It was tolerated then.

This time, it will be different.

Because it already is.