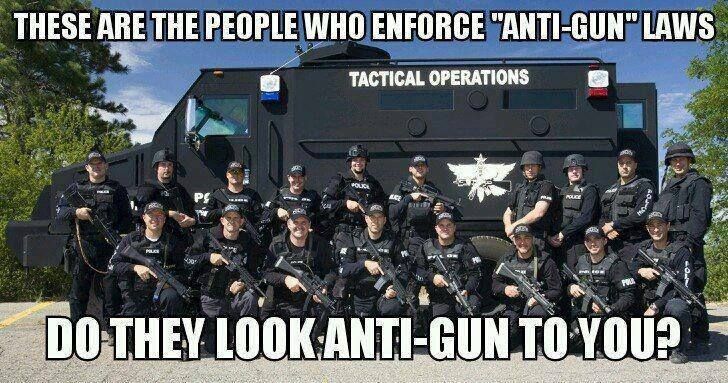 The other day, two defective 12-year-old girls decided to try to impress a fictitious Internet character called Slenderman by stabbing their friend 19 times. 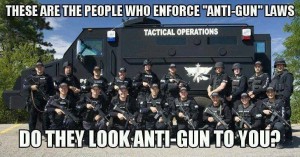 It doesn’t get much worse than that, human depravity-wise. Yet, no primal scream emanating from an emotionally overwrought parent to ban or even “control” knives.

I’ve been trying to parse it. A knife (any knife) is a potentially lethal weapon that can be used to maim and kill. Most of the time, they’re used to do other things – like cut food or open a cardboard box. Just as most of the time, guns are used for other things – such as target shooting. But when a freak takes a gun and uses it to harm or kill people, there is this bizarre absolving of the culprit for his actions, concomitant with howls of outrage directed at the inanimate object used to do the dirty deed.

And yet, person knifed to death is just as dead as the person shot to death. So how come most people don’t blame knives for “knife crime” – while all too many people blame guns for “gun crime”?

Apparently, there is a psychological difference. A phobic, irrational aversion to guns.

There is a term for such people: Hoplophobes. 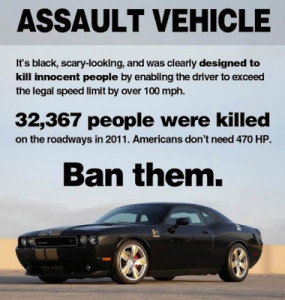 You may have come across it. But I take issue with it. Because these allegedly hoplophobic people are not averse to guns. If they were, their banshee keening calls to “ban” and “control” would apply universally. To include cops, for instance. They’d be just as hysterical – if they were truly hoplophobic – when a cop (or cops) recklessly handled a firearm or shot an innocent. They’d hold press conferences, they’d march. They’d wet their pants when they saw armed costumed strangers walking around the neighborhood.

But they don’t. It’s apparently ok for some people to possess guns.

Just not you people.

Former NY City Mayor Michael Bloomberg, for instance, is not the least bit hoplophobic . . . as far as his armed guards are concerned.

He merely insist you not be armed. 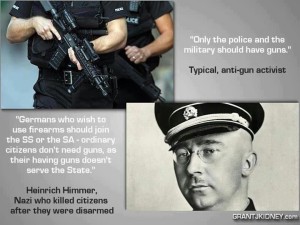 Which might be acceptable if – somehow – the Bloombergian model could be scaled up to provide every citizen with comparable physical security. But that would end up meaning “guns everywhere” – a hoplophobic catastrophe! Instead, these very much hoplophilic personages will keep their guns – while at the same time ordering you to surrender yours. Because you are not to be trusted with the means of self defense. Which amounts to: You are to be left defenseless. A fact, not an assertion. Cops can’t be everywhere – even if we assume they can be trusted absolutely to always handle guns responsibly (as ridiculous a notion as believing cops never drive recklessly). Therefore, you are supposed to accept “taking a number” – so to speak – when faced with a violent assailant (probably not a hoplophobe) trusting/hoping that – eventually – a cop will come to your rescue.

For you, anyhow. But when it comes to the safety and security of Bloomberg, et al, cops (and other heavily armed men) are there immediately. In fact, they are there “24/7.”

Because, you see, Bloomberg, et al, value their lives very much  – and value yours very little.

It’s the ages-old contempt of the elites and their Praetorians for the non-elites, nothing more.

Allowing us to possess the means of effective self defense is to concede that our lives are just as important as their lives. And that, friends, is something they will never concede. 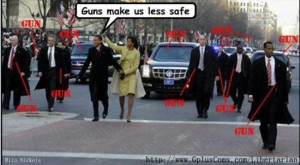 aetorians shot by helots – never the reverse. We are disposable, irrelevant.

The elites have imparted a one-sided form of hoplophobia – one that does not apply to them. They’ve managed – through brilliant emotional-psychological manipulation – to convince the contemptible that it’s ok for the elites (and their praetorians) to have guns.

But no one else.

It brings to mind images of beaten wives and Patty Hearst. Of the 12-year-old who loves the 63-year-old Uncle who molested her. It is epically dysfunctional. The kind of abuse that needs years of therapy just to begin to chip away at the damage. 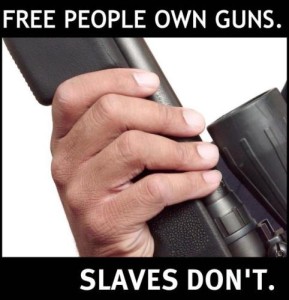 The problem, though, is that this damage doesn’t just affect the damaged. It affects us all – or will, if the “battered wives” who embrace the pseudo-hoplophobic long con don’t begin using their heads. If it’s guns that are the problem, then surely it’s a problem for anyone to possess guns.

All our lives are equally valuable.

Perhaps not to Bloomberg, Feinstein or Obama. But it’s time to call them out on their hypocrisy; to make manifest the contempt in which they hold us. The utter disregard they have for our “safety.”

If they can’t provide us with the same level of protection they feel entitled to, then we have every right to provide it for ourselves.

Meanwhile, spare us the faux anti-gun talk. We’ll turn ours in when they do.

The VW “Fix” (Or: Don’t Take Any Wooden Nickels)