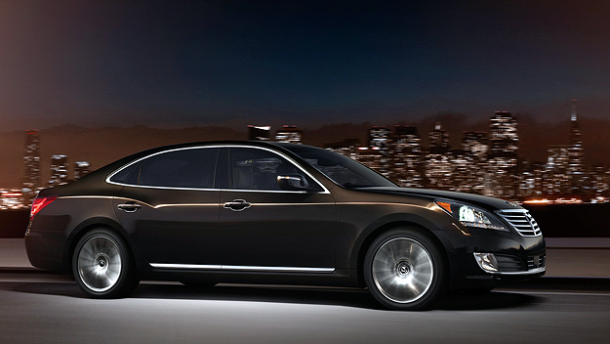 Ever buy a generic drug? 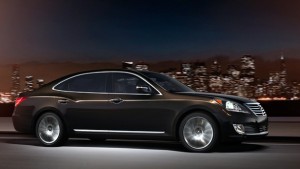 Most of us have – because we know it’s the same drug as the name-brand drug. Just costs a lot less. If it works the same, who cares about the label?

This is the mindset to have when considering the Hyundai Equus.

It’s a large luxury sedan with standard V-8 power, rear-wheel-drive, and a long list of bells and whistles.

Just not the name brand.

Or the name-brand MSRP. 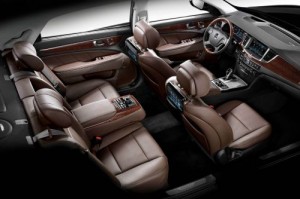 If you can handle that – if you don’t really care about the label but do care very much about what you get – then this car warrants a look-see. Especially if you’ve been looking at the MSRPs of name-branded competitors like the Lexus LS460, which is probably the most directly comparable cross-shop. But it also stacks up very well against the BMW 5 Series – which is smaller outside and much less roomy inside. And the Benz E-Class, which is even smaller on the outside – and even less roomy on the inside.

Can you handle that?

Size-wise, it is bigger than the regular wheelbase Lexus LS460 and falls in between the smaller BMW 5 and Benz E and the slightly larger BMW 7 long-wheelbase and the Benz S-Class sedan.

It costs less than all of them, too. 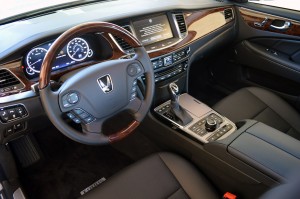 Base MSRP is $61,250 for the Signature trim – which comes standard with a 429 hp V-8, adjustable suspension, three-zone climate control, heated steering wheel, power reclining rear seat and a 17 speaker ultra-premium audio system (among the many highlights).

The Equus gets an exterior and interior refresh, including a new rear seat configuration (three across) for Ultimate trims. Hyundai’s Bluelink telematics system and a cross traffic alert system are now standard equipment in both trims. 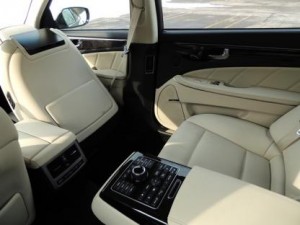 Doesn’t part the crowds like a BMW or Benz. 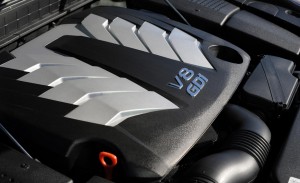 The Equus is one of just two big luxury sedans in this general price range that still comes standard with a V-8 engine – the other being the Lexus LS460.

It’s interesting to note that the name brand leaders  – BMW and Mercedes – have effectively back-benched V-8s, even in their top-of-the-line models. The BMW 7, for instance, comes standard with a 3 liter in-line six. It has twin turbos, but only produces 315 hp. 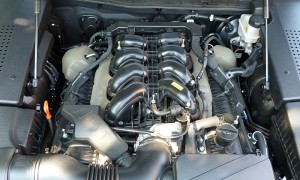 History does repeat itself. The Koreans are doing to the Japanese just what the Japanese once did to the Germans!

And they’re doing it to the Germans, too.

To outgun the Equus in a BMW 5 or Benz E, it is necessary to  order a plethora (cue El Guapo from The Three Amigos) of options. One must move up to the 550i BMW and the E550 Benz – and no matter how many wheelbarrows of cash you bring to the table, neither of them will ever have more backseat room than the much larger Hyundai (more on this below). If you want size and V-8 power, you will have to move up to the 7 series and S Class, respectively.

Bring several wheelbarrows’ worth of cash in that case. 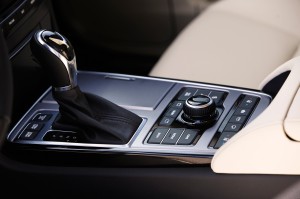 On the downside . . . the Hyundai’s big V-8 has a big appetite, which is no surprise and on the face of it, probably represents no big deal to the well-heeled who buy cars in this class. After all, if you can afford to spend $60k-plus on a car, then spending $70 to fill the thing up isn’t going to hurt too much. The problem isn’t so much the Equus’ appetite (15 city, 23 highway) it’s the inconvenience of fairly frequent pit stops. Best-case highway range is 466.9 miles, according to the EPA – and just 304.5 in the city.

If you don’t mind a smaller car – and a much tighter back seat – you might be tempted by the 40 MPG-capable E-Class diesel (reviewed here) which can go almost 1,000 miles on a full tank. BMW also offers a similarly appealing diesel engine in the 5 and-  beginning with the 2015 model year – also the 7.

Benz and BMW also offer all-wheel-drive in their respective liners, the 5 and 7 (for BMW) and the E and S (for Mercedes). Hyundai only sells the Equus in rear-wheel-drive form. 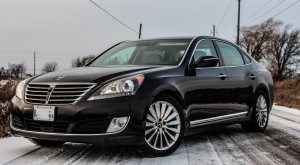 And pony up, accordingly.

The Equus is as smooth as liquid glass, as quiet as the slumber room at your local funeral parlor. It is what luxury sedans once were but increasingly aren’t anymore – having become (for the most part) luxury-sport sedans. This includes the Benzes and BMWs, all series and classes. They ride firmer – and handle better – than the Equus. But the equipoise of the Equus is unmatched – at this price point, at least.

The Lexus LS is similarly at ease, but as discussed above, this also includes its inability to accelerate appropriately when called upon to do so. 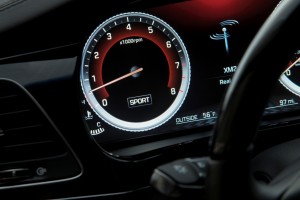 Push the little button forward of the gear selector on the center console to select Sport mode (in Ultimate trims, with the LCD gauges, the backlighting goes angry red) and instantly the shifts sharpen up, the throttle response is noticeably snappier. Alone among the cars in its class (and then some) the big V-8 roars – the correct descriptor – to life and the car leaps forward in a way that only cubic inches (or lots of liters) and a superabundance of torque can deliver. You can even turn the traction/stability control off if you like – really off, not somewhat off – and roast the rear tires.

Forget about that in the Lexus. Or the Benzes and BMWs. They all have momma-knows-best computers that do not allow tire spin, or allow less of it, or only allow it under certain conditions – approved by the computer rather than determined by the driver. 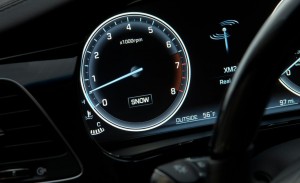 There are two other drive modes – Snow and Eco – and you can control the gear changes of the eight-speed automatic manually if you prefer. Both trims also come with a driver-selectable “kneel down” – and “stand up” function that lets you raise or lower the car’s ride height by pushing a button just aft of the gear shifter. Raising the car could help in winter – or if you have to deal with high standing water in the wake of a heavy rain.

Handling and ride-wise, the Equus is a very different car than its German rivals. It is like being in a first-class suite on Titanic. A massive object moving at a good clip, unperturbed by the “water.” But – also like Titanic – this big boat does not like to turn quickly. If you insist, it will protest. Tires will begin to squeal as the 4,533 lbs. of steel aluminum, glass, plastic and leather will begin to slosh around. The steering is way too light and numb for Hunter Thompson-esque off-ramp pirouetting or apex-drifting. 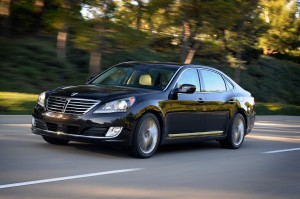 But does it matter?

Do people who buy cars in this class drive like Hunter Thompson?

Probably not – in which case, the Hyundai’s high-speed handling deficits are as immaterial as the of-road capabilities of a Corvette.

What this car does brilliantly is reproduce the ambiance of a first-class stateroom on Titanic . . . and while moving along at considerably faster than Titanic’s 22.5 knot maximum speed.

I parked my Equus press car next to a new Benz E 350 to get a sense of them both. The Hyundai made the Benz – which is a very nice car – look very small.

Which it is – in comparison. 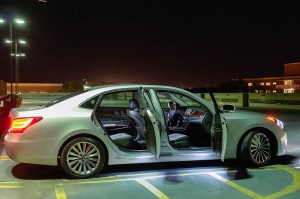 Here’s what that means to you:

In the Hyundai, there is 38.8 inches of legroom in the second row – vs. 35.8 in the E-Class Mercedes sedan and 36.1 in the BMW 5. The Hyundai’s back seats also recline – very much like the back seats of the Benz S-Class I tested out a couple months ago (review here). But the S-Class is in another galaxy, price-wise. 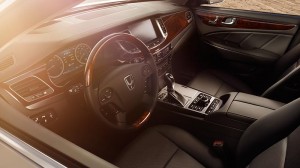 What Hyundai has done here is what battleship gunners aimed to do: straddle the target, then sink him.

One salvo that scored a direct hit was aimed at the Lexus LS460, which – though nominally full-size (and Lexus’ top-of-the-line model) is nonetheless a smaller, far less roomy on the inside car (35.8 inches of backseat legroom) that also happens to have a base price nearly $10,000 higher than the Equus’ base price. A long-wheelbase version of the LS460 is available . . . for another $6,000 ($78,440) which means you’ll pay $17,150 more to get a Lexus that’s larger/roomier than the Hyundai. 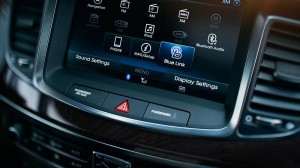 Remember: All that stuff comes standard. It bears harping on. Equivalent equipment is either optional in the Equus’ price-comparable competition or it’s not available at all (e.g., those reclining rear seats). 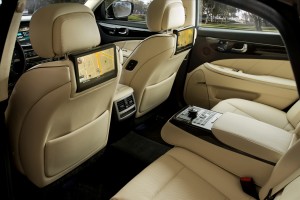 To really blow ’em out of the water, order the Equus Ultimate. It comes with all the stuff above, plus a flat-screen LCD gauge cluster (similar to what you’ll find in the six-figure Mercedes S-Class), a programmable heads-up display, power/”soft touch” door and trunk closers, surround-view camera system and a twin-LCD rear seat entertainment system.

That’s about $3k less than Lexus wants for the least expensive LS460, incidentally. Without options, without the extra backseat room that comes with the long-wheelbase L model.

There are two possible downsides to owning a Equus vs. one of the name-brand competitors. I emphasize “possible” because these critiques are to a great extent subjective – and may not matter to you. 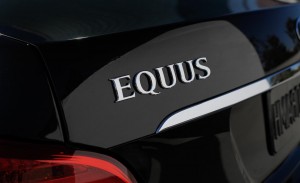 First, there is the obvious one: Curb appeal. Or rather, snob appeal. “Hyundai” simply hasn’t got the cachet that “BMW” or “Mercedes” and “Lexus” have. Hyundai apparently realizes this. Evidence being the notable absence of “Hyundai” badges on the Equus. Even the logo is different – a stylized spread-winged raptor (almost a Firebird!) in lieu of the run-of-the-mill Hyundai’s rightward-leaning “H” logo.

But, you’ve still gotta go to a Hyundai dealer to buy the Equus – and that’s also where you’ll be going for service.

And that’s a potential problem.

People who shop cars in this class generally do not care to mingle with people who buy cars in the economy class. Call it classist, call it what you will. It’s a reality. Toyota was savvy enough to create Lexus – and not sell cars like the LS460 side-by-side with Corollas and Camrys. 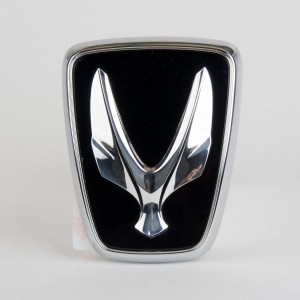 Hyundai probably should have followed that example – and likely will.

The order thing is the take-it-or-leave-it drivetrain. This is the one area where the Equus offers less than the competition. The V-8 being standard – and very powerful – is great. But given the cruiser-not-bruiser nature of the Equus, a turbo-diesel option seems logical.

Or perhaps a hybrid layout (gas V-6, electric motor and battery for boost on demand).

With the V-8, you’ve got muscle car quickness, but also frequent fill-ups. As mentioned up above, it’s not the money that matters – it’s the hassle. A few weeks ago, I tested the new E250 Mercedes – the E-Class sedan with Mercedes’ new turbo-diesel four. I drove it all over the place for a week and it still had a quarter tank left on the day they came to pick it up.

The Equus was empty after three days, driving the same distance.

There’s one other thing to consider, too. Hyundai – like every other automaker – is going to have to figure out a way to keep on building cars like this while not running too far afoul of the government’s ever-more-strident fuel economy mandates. BMW and Mercedes have been going over to sixes (and even turbo-diesel fours) for exactly this reason – even in their high-end cars. Not so much because of market pressure but because of government pressure. The smaller sixes and fours even out their “corporate average” fuel economy numbers – and thereby make it feasible to continue offering V-8s, but as relatively low-production (and mostly optional) powerplants. 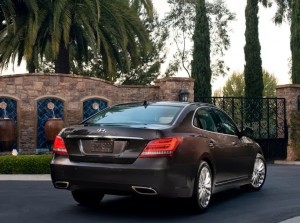 If you care more about what you get than about what other people think you spent, take a little trip down to the Hyundai store.

I think you’ll be impressed.