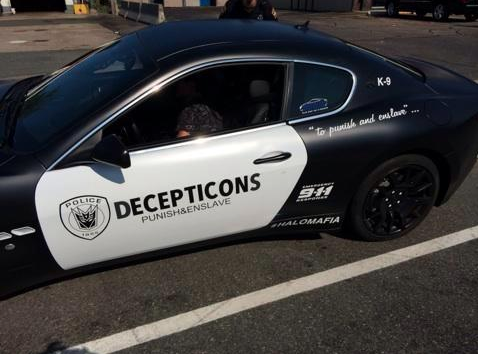 No one likes a hypocrite – which helps to explain why thinking people increasingly tend to dislike cops. They routinely ignore or violate the laws they spend their days forcing us to obey. Everyone, for example, has seen cops insolently ignoring the posted speed limit. Frequently, while not wearing their “safety” belt. Insolently, because they are well-aware that they can do both with impunity, since we have no legal power to pull them over. 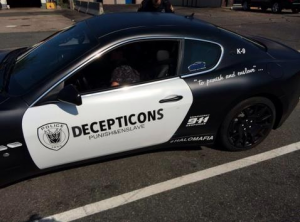 Here’s another – put into black and white (literally):

A guy in Massachusetts painted his Maserati in cop-style regalia. He did not claim to be a cop. But his car kind of looked like it might be a cop car. He was charged with impersonating a police officer – a serious crime.

But cops routinely – and legally – impersonate us. That is, they pretend to be ordinary citizens, for the purpose of entrapping us in the act of committing some “offense” or other. The obvious example is, of course, “speeding.” Instead of driving around looking for them in a marked cop car, the cop will go chameleon and drive around in an unmarked car – one deliberately shorn of external light bars and insignia and painted in “civilian” colors. Cops will even go so far as to dress to look like construction workers – and erect a fake “work site” – again, for the purpose of blending in so as to more efficiently catch their prey. In TN, the cops were (and may still be) driving around in big rigs, for the same purpose.

Why can they impersonate us – but it’s a “crime” for us to do the same? 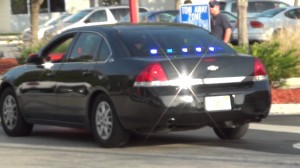 You know perfectly well why. Because the game is meant to be rigged – in their favor.

Cops are also legally entitled to lie to us – but if we lie to them, it is a chargeable offense. Even our silence is no longer golden. The courts in CA have ruled that unless we specifically invoke our rapidly fading away right to remain silent, we do not have the right to remain silent. That is, our silence can be construed in court as evidence of guilt (no, really … see here).

There is also a movement – by them – to forbid us from owning body armor. It is of a piece with prior efforts to forbid the possession by us of any firearm that can fire automatically, or which is above a certain caliber. Indeed, to deny us the privilege of owning any firearms at all.

While extending to them virtual carte blanche to point firearms at us. 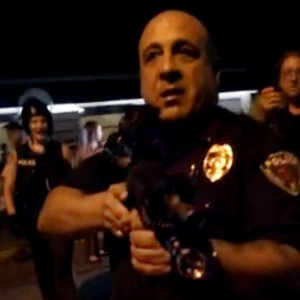 There is the extreme example of the bullet-head in Ferguson, Missouri who literally threatened to “fucking kill” a journalist covering the unrest – and backed up the threat by lowering the muzzle of his loaded assault rifle and pointing it at the journalist. We all know what would happen to one of us if we were to point a loaded rifle at a cop and threaten to “fucking kill” him.

Cops can lay their hands on us – with legal impunity. If we so much as raise our hands to defend against this, we have committed a “crime” (“resisting”) and can expect to be punished.

As happend to protestor Cecily McMillan, who was sentenced to several months in jail (she faced years in jail) for the “crime” of reacting instinctively to the grasping from behind of her breasts by one of New York’s Not-So-Finest back in ’12. The 25-year-old graduate student was lectured by the court that “A civilized society must not allow an assault to be committed under the guise of civil disobedience.” But it’s ok for an assault to be committed under the color of law – and we’d damned well better not “resist.” 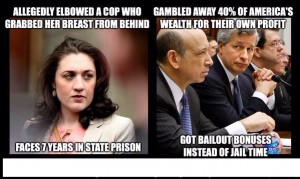 All this stuff is obvious – to such an extent these days that one would need to be deliberately oblivious (that is, in denial) not to be aware of it. From the murder in the street by chokehold of a man for the “crime” of selling cigarettes to the now-sanctioned-by-law digital inspection of our body cavities (which would be sexual assault were any of us to do the same thing) the cop class has become a protected class.

There is a legal double standard on the front and back end.

Even when a cop is caught blatantly disregarding the laws he’s (supposedly) bound to obey – for example, the law in NY that forbids the use of chokeholds to “subdue” a “perpetrator” – typically, the very worst that will happen to him is that we he will be “taken off the streets” (briefly) and assigned “desk duty.” Or “suspended” – with pay. That is, he will enjoy a paid vacation, at the expense of the very people he spends his days abusing. 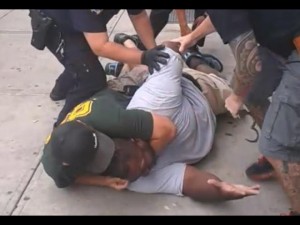 This rot now transcends American society. From socialism for the rich (and rent-seeking) to the not-so-free market for the rest of us. If you have pull – connections, an official title (and by dint of that, some form of qualified immunity) then you’re more or less free to do as you like. Of course, thus has it ever been. But what sticks in the craw is the now-nauseating warbles about “freedom” and – the worst one – the “rule of law.”

Just as in any Third World Dear Leadership state, the rulers both make – and are above – the law. Which is whatever they say it is, subject to interpretation at their whim.

So, please. Spare us the claptrap about serving and protecting. We know what you’re up to – and what you’re all about. You may have us under your power – for now.

But you lost our respect – and earned our contempt – a long time ago.