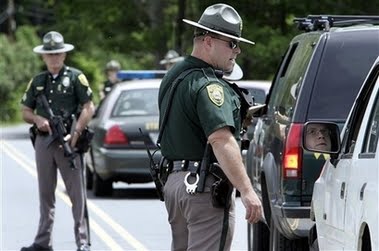 It was a beautiful August Saturday night; high 70s, low humidity and mostly sunny. A local restaurant on the main strip of our town (honestly it’s not that much of a strip) hosted a small car show. The owner of the restaurant is also the owner of the developed & undeveloped lots and mini-malls in the area that surrounds the restaurant. There is a rowdy bar a couple hundred yards away on the hill and the closest residential home is about half a mile away (the ones visible below in the distance behind the trees on the left side). I cleaned up my MR2 and headed over with the family.

The proceeds from this particular get-together went to the Wounded Warrior Project. The majority of the cars fall into the category of hot rod, classic muscle cars and modern muscle cars. These small local shows are nice because these are real people who do the work themselves instead of paying someone to do the work for them. All enthusiasts are accepted and appreciated; even if you show up with a 25 year old car from Japan with only half a V8 powering it.

Some cars are nicely restored like this Plymouth ‘Cuda;

while others like this mid-engine Corvair with a V8 in the back seat are a bit more wild.

Around 7:15pm the burnout contest started. Kids and grandkids got excited as their dads and grandpas got their cars and trucks warmed up. This was to be done on the section of the privately owned road that connects the parking lots, all of which are owned by restaurant owner (who was also OK with his property being used for the burnout contest). There were staff coordinating it to make sure there was only one vehicle going at a time and that the area was safe before each exhibition of power.

I had seen this Firebird’s engine compartment earlier and figured it would put on a good display; it didn’t disappoint.

Fun was being had in a safe manner by consenting people with a common interest on private property – so the only thing missing was the friendly neighborhood storm troopers.

The thunderous burnout must have scared Officer Friendly because shortly a second car arrived:

Two weren’t enough to handle this riotous behavior of a middle-aged family man doing a burnout on a private drive – so a third rallied to their position.

All this for a burnout; a burnout on private property with the property owner’s consent.

There must not be any actual crimes being committed (“crimes” being someone’s rights being infringed). If the crime is so low that three cars can be spared to respond to a burnout contest on private property I don’t think the resources allocated to the police dept. match up with the needs of the community.  Then again it is the 30th of the month and quotas don’t fill themselves.

Why is it that these so-called public servants impose themselves on our lives?  The staff and property owner even went to bat for the owner of the Firebird.

The police officer’s presence and interference was unnecessary, unwarranted and unwanted.  There wasn’t a single person there not visibly annoyed by their imposition. This was private property, no harm was being done to anyone and the closest thing to property destruction would be the heavy black marks left on the pavement that will persist until the next heavy rain. Why do these Dudley Do-Wrongs storm in to wreck the day? Why is this driver likely being charged with “reckless driving” (or similar violation) and the LEO isn’t being charged with trespassing?

Mind your own business.

We are treated as children even when we are grown adults; we are not provided the freedom to simply be left alone from the harassing, meddling, do-gooding and revenue milking.

The third LEO did not even join his brothers-in-arms, instead he drove around the parking lot and grass field looking for violations to add funds to the local coffers. I wanted to investigate so I headed over and while doing so I stoked the fire a bit by loudly commenting that I wondered “…when the SWAT team was going to show up with tear gas to force everyone to disperse?” People agreed and wanted to know why they aren’t minding their own business; this was not racing, nor was it on a public road. 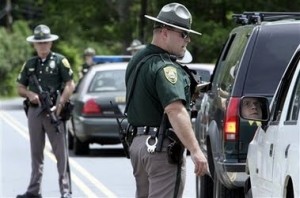 In reality the tear gas wasn’t necessary; they got what they likely wanted, people started clearing out early and heading home before plaques/announcement for best of show and best burnout (obviously) were even awarded. The presence of the cops was tear gas enough.

Just another day keeping everyone safe from inhaling smoke from tires and clutches; it’s for the safety of the chil’run don’tcha know…

More and more car shows are mostly attended by people whose hair is dominated by grey and white. They remember the “good ole days” when a car represented a coming of age and entry into a new level of freedom. You actually felt as if you owned the car and could use it without being harassed by rules created “for our own good.” The cars here and at most shows have heart, character and uniqueness but lack V2V communication, bluetooth, GPS, black boxes and a baker’s dozen of dashboard claymores.

Car ownership isn’t a strong priority among millenials; they have recognized car ownership for what it is becoming; indentured servitude with overburdened rules from the state that increasingly look to those who dare to exercise autonomy as prime suspects and that need to be taught a lesson, coerced and revenue milked.

So it goes in the former land of the free…

The Fun of Driving Slow, Fast