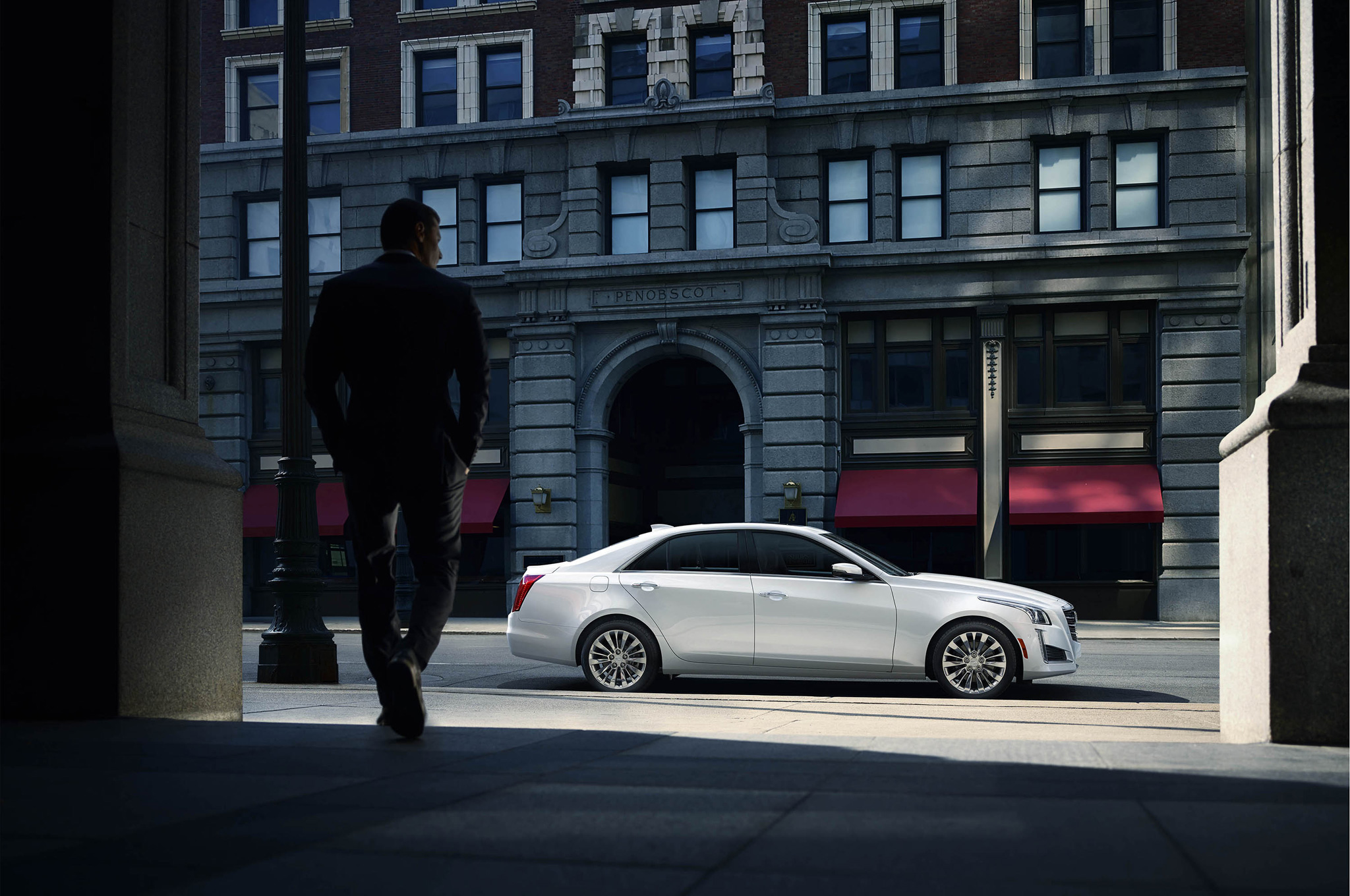 Do you want the good news – or the bad news – first? 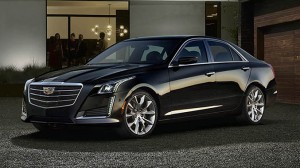 At least, for now.

At this moment in time, Cadillac no longer sells a V-8 powered passenger car.

But, the market has changed and neither bigness – nor big V-8s – define luxury today. Athleticism. Technology. These are the in things.  But one thing remains the same – both in terms of market desires and what today’s Cadillac offers: Something with curb appeal. 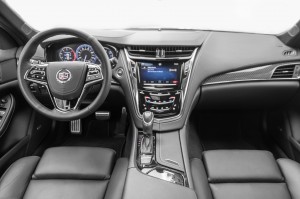 The CTS is Cadillac’s mid-sized luxury/performance sedan. Like the traditional “go to” models in this segment – especially the BMW 5 Series – it is based on a rear-wheel-drive layout, with all-wheel-drive available optionally. Not so traditionally – for Cadillac – the CTS is arguably the sportiest car in this segment, with cars like the BMW 5 and Mercedes E-Class (both of which offer high-economy diesel engines) taking up the role of luxury-touring cars that was once very much Cadillac’s specialty.

Luxury and Performance trims are the next step up, each available with a larger – and stronger V-6 and with (or without) all-wheel-drive.

At the pinnacle is the high-performance V Sport Premium, which adds a pair of turbochargers to the V-6 that goose the horsepower from 321 to 420. This model is only sold in rear-wheel drive form and comes with a new eight-speed automatic. 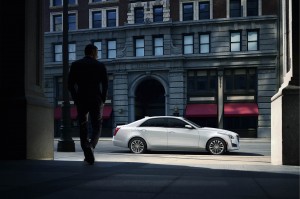 In another sign of the changing times, the new CTS no longer offers a CD player.

They’ve become the tape decks of our time.

Much stronger standard engine than rivals – for much less money. 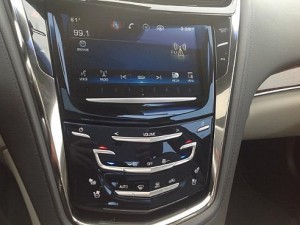 Engines are thirstier than rivals.

V-6 V-Sport is down on power compared with benched (for now) V-8 CTS-V.

Just the sedan bodystyle (the formerly available wagon and coupe have also been back-benched).

“Haptic” touch/tap/swipe controls look slick but often take multiple touches/taps/swipes to get them to do what you want.

The CTS comes out of the gate guns blazing – with a 272 hp turbocharged (up to 18 psi of boost) 2.0 liter engine paired with a six-speed automatic and your choice of RWD or AWD power delivery.

That stacks up tall against the BMW 5 – which also comes standard with a turbocharged 2.0 liter four – but which only manages 240 hp. 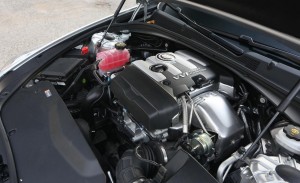 It’s a similar tale when you stack the CTS up against the Benz E, the other obvious rival in this class. The E does offer economy – a lot of it – with its newly standard 2.1 liter turbo-diesel four: 45 MPG on the highway, which cleans the CTS’ clock on that count. But it also takes 8 seconds to get to 60. Which isn’t slow. 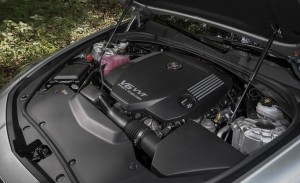 And – shazam! – there’s little price to pay at the pump. The V-6/RWD CTS manages 18 city, 29 highway – virtually the same mileage you’d get with the turbo four. 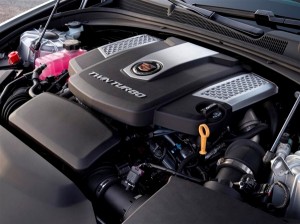 At the summit of CTS performance is the V Sport… not to be confused with CTS-V, which is being held in abeyance until at least 2016. It features a twice-turbo’d version of the 3.6 liter V-6, the output swelling to 420 hp. This number would seem heroic were it not for the inevitable comparison… with the no-longer-available 556 hp CTS-V.

Cadillac had to pull the plug on the big eight because of its big appetite. The latter creates problems with the government, which – in true gangster fashion – makes the car companies an offer they can’t refuse: Pay us, if you want to build the car. So-called “gas guzzler” fines are levied – and this (rather than shifting consumer preference) accounts for the great die-off of V-8 engines, even in high-end cars such as this. Note also that Mercedes has dropped the formerly available V-8 from the 2015 E sedan’s roster of powerplants, replacing it with – no surprise – a turbocharged V-6.

Turbochargers are a crutch. They make it feasible to maintain acceptable (to the market) power/performance while also placating the government’s ever-escalating demands that cars be made more fuel-efficient.

As I type this review, only a few cars in this class still offer V-8 power – among them the BMW 550i and the Hyundai Genesis/Equus.

How much longer they’ll be able to offer them is anyone’s guess. My guess is the end will come sooner rather than later. Within two or three years – five at the most – V-8s will almost certainly have become engines for the uber-rich only. Think Girl on Fire and President Snow. Because only the uber-rich will still be able to afford the hit – and the small numbers built won’t hurt the car companies’ CAFE numbers much.

But as mass-market cars accessible to the middle and upper middle class buyer? 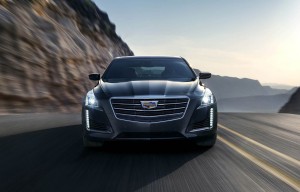 Cadillac has come a long way, baby – and you owe it to yourself to test drive this CTS. If what you’re after is a car more like BMW used to make.

And yes, you can say that about a Cadillac now.

The Caddy’s steering feel, especially, is truly top-drawer. Current BMW electric-assist steering is precise, but has lost something tactile in translation.

The other factor is having the power to slingshot out of the curves.

The as-it-comes 5 Series lacks it. The diesel Benz lacks it even more. Those cars have great road manners and – the Mercedes especially – a pleasing abundance of part-throttle/low RPM pull (courtesy of the E’s high-torque turbo-diesel engine). But if you’re interesting in moving – right now – the CTS has got the goods on those two.

Cadillac also offers more than merely under the hood upgrades. Brembo high-capacity brakes are standard equipment on all trims. An optional Performance package adds 18-inch wheels and more aggressive tires and an adaptive suspension system that automatically reacts to faster-paced driving, firming up the ride (and dialing it back down when you do).

There is also a Performance seat and gauge cluster package – the latter being a flat screen/LCD affair very similar in appearance to what you’d find in an S-Class Mercedes.

V-Sport models get a “track” mode – unique to this trim – as well as faster steering, an electronic limited-slip differential and high-capacity cooling (the latter can be ordered with the other two engines, too). 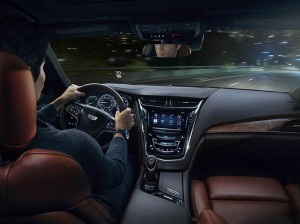 The only thing that’s missing is a clutch.

You used to be able to buy a manual in the CTS. But – like the disappearing V-8 – manuals are fading from the scene, for the same reason. They’re less fuel-efficient than modern automatics, which can be programmed to the nth degree to achieve slightly better MPG stats on the test-loops that the government uses to rate a car’s mileage. The difference per car is not typically huge – 3 or so MPG – but when factored as an average across a fleet of vehicles (which is how CAFE, the government’s fuel economy mandate is calculated) a 3 or so MPG difference matters a great deal. 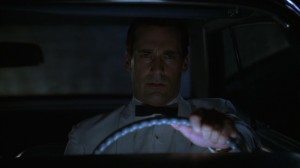 It’s not hard to visualize Don Draper behind the wheel of a new CTS. Like him, it is slick, purposeful – not a hair out of place. Ready for business. 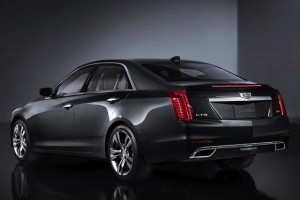 Two central LCD displays dominate the landscape: The main gauge cluster renders the traditional speedometer and tachometer in familiar style but with the numerals and needles having no physicality.

The display can be changed to suit, too – and the LCD format allows more information to be accessible and viewable this way than would be feasible with analog or even digital gauges, the number of which is restricted by the space available. The Caddy’s layout is like an iPad screen – and the possibilities are almost limitless.

Additional/supplementary information can be projected in the driver’s line of sight, via the Heads Up Display (standard w/Performance trims). 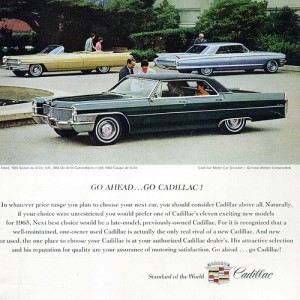 The center stack is dominated by another LCD display. This is the Cadillac Use Experience interface. It’s a touchscreen, with large buttons on the main page, to engage the different menu options. This generally works well, in addition to looking swell.

Below the CUE flatscreen are the “haptic” (touch/tap/swipe) controls for adjusting the stereo volume and temperature controls. These also look ultra-hip, but their real-world operation is less than ideal. Part of the problem is that it can be difficult to accurately engage what you want, either because when the car is moving it is hard to keep your finger perfectly lined up with the right spot on the sliding scale; it’s easy to “overshoot.” The fine control needs some work. It is still easier to make incremental changes (such as slightly increasing fan speed) by rotating an old school knob. 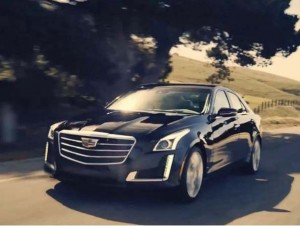 In-car Wi-Fi is pretty cool. But how about outside the car? The CTS’s system provides Internet access within 50 feet of the car. So, you could park, pop the trunk, get out a blanket or lawn chair – and enjoy the view at a scenic overlook… and surf on your laptop, too.

Another cool – and uniquely GM – feature is the buttocks buzzer. Well, GM does not call it that – and it vibrates rather than buzzes. It’s used to alert the driver to an object in the vehicle’s path (as when backing up out of a parking spot) without subjecting the car’s occupants to noises and lights. It’s much less intrusive – and so, arguably more effective at getting the message across without also annoying (and so, distracting) the driver. 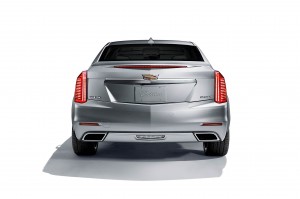 Twenty years ago, a Cadillac such as this would have been unimaginable.

Thank the Motor Gods that Cadillac dared to imagine it.

And then, actually went ahead and built the thing.

PS: EPautos stickers are free to those who sign up for a $5 monthly recurring donation to support EPautos, or for a one-time donation of $10 or more. (Please be sure to tell us you want a sticker – and also, provide an address, so we know where to mail ’em)