Here’s a news article about him:

MIAMI (AP) — Drivers at drunken-driving checkpoints don’t have to speak to police or even roll down their windows. They just have to place their license and registration on the glass, along with a note saying they have no comment, won’t permit a search and want a lawyer. At least, that’s the view of a South Florida attorney.

Warren Redlich contends the commonly-used checkpoints violate drivers’ constitutional rights. He and an associate have created a website detailing their tactics. They’ve even made videos, one viewed more than 2 million times on the Internet, of their refusals to interact with police.

Doubts over the legality — and wisdom — of the tactics have been expressed by legal experts and local authorities.

Redlich, of Boca Raton, said his goal is not to protect drunken drivers, but to protect the innocent. He says some of his clients who passed breath-alcohol tests still faced DUI charges because the officer said he detected an odor of alcohol or the person had slurred speech.

“The point of the card is, you are affirmatively asserting your rights without having to speak to the police and without opening your window,” he said.

Not surprisingly, this does not sit well with law enforcement officials who insist drivers must speak in order to make the checkpoints work. And, they point out the U.S. Supreme Court in 1990 upheld the use of random DUI checkpoints, concluding they don’t violate constitutional protections against unreasonable search and seizure. 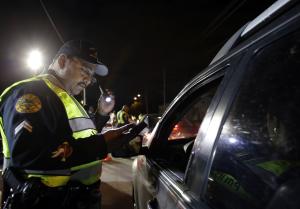 “They wouldn’t be allowed out of that checkpoint until they talk to us. We have a legitimate right to do it,” said Sheriff David Shoar of St. Johns County, president of the Florida Sheriffs Association. “If I was out there, I wouldn’t wave them through. I want to talk to that person more now.”

The widely viewed video was shot Dec. 31 at a checkpoint in Levy County, Florida, by Redlich’s associate Jeff Gray. In it, Gray approaches the officers with the flyer, his license, registration and insurance card in a plastic bag dangling outside the slightly open car window. The officers briefly examine it with a flashlight and then allow him to continue.

In bold type, the flyer states: “I remain silent. No searches. I want my lawyer.”

Police across Florida have seen the video. A spokeswoman for a large metro police agency says Gray’s experience at the checkpoint doesn’t mean the no-talk tactic is legitimate.

“He was allowed to proceed because he clearly was not driving while intoxicated,” said Veda Coleman-Wright, spokeswoman for the Broward Sheriff’s Office. “If those officers had reasonable suspicion to believe that the driver was impaired, they would have investigated further.” 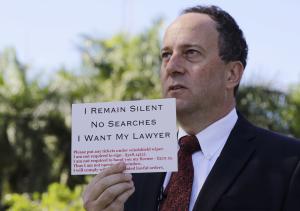 In this Friday, Jan. 30, 2015 photo, attorney Warren Redlich holds up a flyer he designed during an  …

There have been other incidents of motorists refusing to speak at DUI checkpoints around the country. In the Southwest, some drivers resist cooperating at Border Patrol checkpoints miles from the Mexican border that are aimed at finding immigrants in the country illegally.

Based on differences in DUI laws, Redlich has created versions of his flyer for 10 states with more on the way.

There are no comprehensive statistics on how many drunken drivers get caught at checkpoints, which are usually announced publicly in advance and must adhere to a strict set of court-approved rules.

For example, the Miami-Dade Police Department uses a “neutral” method of selecting which drivers get stopped, such as every single vehicle or maybe every third vehicle. The Miami Police Department uses the “chute” method in which 10 cars are randomly diverted from a busy thoroughfare to a side road and checked simultaneously by officers, followed by 10 more.

At a recent checkpoint, Miami Police Sgt. Luis Taborda said it’s as much about deterrence and visibility as making DUI arrests. Taborda has frequently brought bad news to a family when someone is killed or seriously injured by a drunken driver. 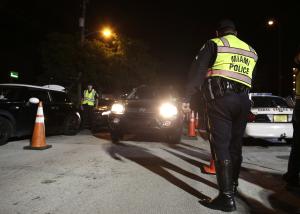 In this Thursday, Jan. 29, 2015 photo, a Miami police officer guides vehicles through a drunk-drivin …

“I’m the one that has to knock on somebody’s door and see the pain that person has to go through,” he said.

Legal experts said it’s unclear whether Redlich’s tactics will hold up in court. David S. Weinstein, a former Miami state and federal prosecutor now in private practice, said most states consider driving a privilege and drivers give up some rights.

“You may have to roll your window down and interact” with officers, Weinstein said. “These guys are all pushing the envelope.”

Redlich, however, said to his knowledge his flyers have been successful every time they have been used. His goal is not to challenge or confront police, he said.

“I’m not anti-cop. I’m anti-bad government and anti-bad cop. I support good cops,” he said. “I would like if police didn’t waste their time with something like checkpoints and would focus their attention on violent crime.”