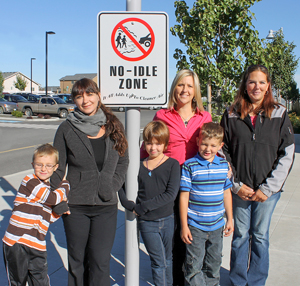 Have you heard about “no idling” zones? Places where it is verboten (and punishable) to leave your car’s engine running? 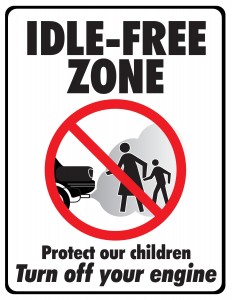 Sounds silly, I know. And it is silly – because it’s not 1970. The stuff coming out of the tailpipe today (and for the past 20-plus years) will not make your eyes water, nor chafe your lungs – much less smogify the sky. Because it is almost (upwards of 95 percent) water vapor and carbon dioxide.

Al Gore may not like C02 for “global warming” reasons –  but carbon dioxide is a chemically inert non-factor as far as air quality goes.

These are facts, but the government-school-addled populace does not comprehend. “Moms” (my teeth ache) worry about “pollution” hobgoblins – and politicians are more than ready to “help.” Efforts are afoot across the land to create a nexus of “no idle” zones.

See here and here to get hip to what’s up.

So far, these have been proposed in the vicinity of  where “the children” congregate; that is, at and around government conditioning centers (i.e., public schools). But as “the children” are everywhere – or could be – and must be kept safe from all dangers, no matter how attenuated or exaggerated – it’s inevitable that “no idle” zones will be expanded. Just as “no smoking” zones now constitute the entirety of the external world outside of your own home or personal vehicle – and even that is under assault (the argument being that the slightest chance a whiff of “second-hand smoke” might caress the nostrils of a nearby child is sufficient reason to forbid smoking within one’s own home or in a vehicle a child might occupy at some point in the future. 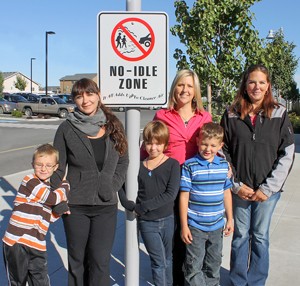 Don’t laugh – because the joke’s on you.

I can remember laughing about the “buckle up for safety” estrogenated hysteria back in the ’80s.

Neither are smokers – who might as well be child molesters, given the societal hate (and sanctions) heaped upon them.

These “no idling” zones are serious business. And I can see the pincers lining up.

On the mechanical front, we have the Auto-stop/start systems very suddenly being fitted to a growing number of new cars. Almost every new (2015 model year) high-end car already has it as standard equipment and within a year or two, it will be as common in cars generally as LCD screens and GPS are right now.

Are you hip to Auto-stop/start? In vehicles so equipped, the computer cuts the engine off automatically whenever the vehicle rolls to a stop, as when at a red light – restarting it just as automatically when the light goes green and the driver takes his foot off the brake or applies pressure to the accelerator. Ostensibly, the object is to lower fuel consumption by not having the engine wastefully burn it while the car’s not moving. That sounds ok, but there are several immediate and potential down-the-road not-so-goods that aren’t touted – for reasons I’ll get into right now.

One, while it’s true that an idling engine isn’t working to move the car (so why idle the engine?) it is working to power engine driven accessories such as the air conditioner and alternator. With the engine turned off, these accessories are off, too. The car heats up (if it’s summer) and it will take more energy to cool it down – probably negating whatever fuel was saved by not running the engine.

A way around this would be to power accessories electrically rather than mechanically. This in fact is already happening. Many new cars (including all hybrids) have electric-assist power steering. AC can be powered the same way. But there must be electricity to power things this way. That includes the car’s headlights (even in daytime, since virtually all new cars now have always-on Daytime Running Lamps) as well as the stereo, the power windows and so on. With the engine not running, the battery is draining.

Heavier-duty batteries will be needed. These will cost more and inevitably require replacement more often due to the greater loads (and repetitive charge/discharge cycling).

Auto-start/stop requires super high-torque starters, for near-immediate re-starts. These will also drain the start-up battery sooner, which (again) will have to be made stronger in order to deal. Ditto the car’s charging system (alternator) which will – which does – need to be able to produce a lot of juice to keep up with the repetitive stop-start-stop cycling. Engine wear and tear could be accelerated, too – because most wear and tear occurs guess when? When the engine is started – because it hasn’t yet built up oil pressure.

Another thing that hasn’t been much talked about is the effect of turning off the engine on automatic transmissions – which depend on the running engine to circulate hydraulic fluid and dissipate heat. If the fluid runs excessively hot, it breaks down… and inevitably, so will your transmission. 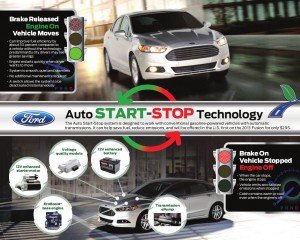 The above issues could be crutched by electro-hydraulic accumulators – devices that would maintain oil pressure, or even circulate oil while the engine itself is not running. And fans. More (and higher capacity) fans.

These will not be free, either.

But the farther-off danger is that Auto-start/stop will eventually be mandated – justified first as a fuel-saver and then for the sake of (cue Al Gore) “clean air,” with “the children” serving as the backdrop.

“No idling” zones will proliferate as the number of Auto-stop/start-equipped cars does. And cars without Auto-start/stop will effectively be banned from operating in and around a growing radius of “safe” areas across the land.

This is exactly what’s already happened in several Western Europe countries, the front line in the war against the private car. They call them LEZs, or Low Emissions Zones. Anything with an internal combustion engine, period, is prohibited. You may have noticed that in many U.S. cities, life is being made as difficult as possible for the car by replacing roads with “pedestrian only” areas and other such measures. 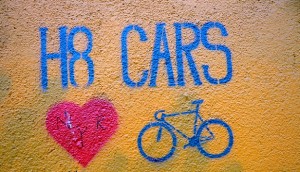 Some are cheering (see, for example, this).

Five years from now, those of us who “cling” to our non-auto-stopping (and perhaps even internal combustioned, period) vehicles will find ourselves pariah-ized like the smoking untermenschen, the unsafe seatbelt scofflaws, the “health care” refuseniks.