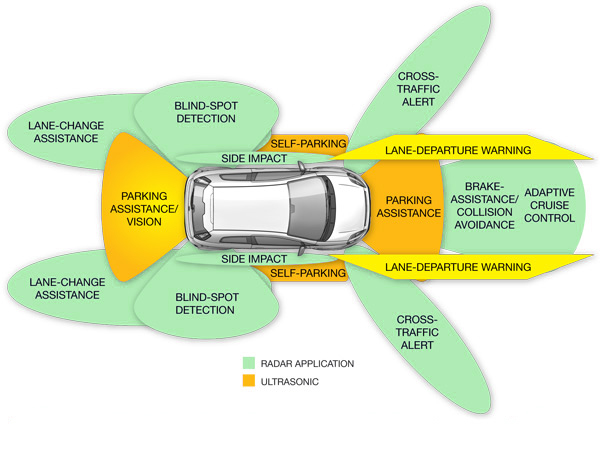 We’re told it’s not safe to text while drive because that’s a distraction. But how about all these buzzers and flashing lights and (yes, it’s true) suddenly vibrating seats and steering wheels? Many new cars comes equipped with some – or all – of the following:

Plus air bag sensors so sensitive they sense a “person” in the passenger seat when all you’ve got riding shotgun is a footlong from Subway.

Each with a buzzer/beeper and light show.

Is it all not… distracting to be accosted by such?

All new luxury cars – and more and more mid-tier (and soon, all) cars have or will have “safety” systems that buzz/beep/vibrate/flash angry warnings at you when – in the judgment of the sensors – you do something “unsafe” such as let your wheels touch the yellow or white painted lines in the road (Lane Departure Warning) or get within 10 yards of another car as during passing, or when drawing up behind a car turning off the road (Collision Mitigation/Brake Assist).

These flashing red warning lights and frantic beeps that erupt literally out of nowhere – and arguably, for no good reason – when you fail to slam on the brakes because the sensors think you ought to are the “e” equivalent of a shrieking child or your mother-in-law poking you in the ribs from behind. 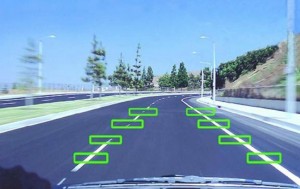 Especially now that it’s become a kind of symphony.

Multiple buzzers and lights and vibrating steering wheels and seats, dancing together in a lurchy, unpredictable syncopation that works on you not unlike those recordings of screaming rabbits the DEA played at top volume toward the Branch Davidians hunkered in their compound at Waco.

You put your car in reverse and begin to back up out of a parking spot. Beep! Beep! Beep! The Park Sensors alert you to the not-near presence of another car you already see. But your concentration’s been broken. You reflexively stab the brakes. Or you actually do back into something because the buzzer and light show confused/startled you momentarily.

You’re driving along and up ahead – far ahead – a car has its right signal on and is slowing to make the turn-off. You do the mental calculation and know you can maintain a certain speed/closing distance because by the time you actually get to where the turning-off car is, it’ll be gone. But the Collision Mitigation System wants you to brake 30 yards out – for “safety” – and if you don’t, on comes the absolutely frantic Flashing Red Light show, accompanied by the shrieking Beep! Beep! Beep! 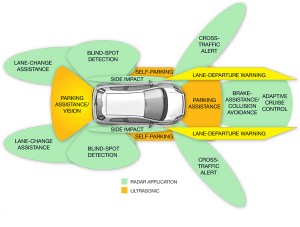 If you’re not ready for this – or react to it the wrong way – you might just jerk the wheel instead of mash the brakes – and end up across the double yellow and into the path of a car coming the other way.

Because it creates a new problem that didn’t exist before that’s arguably just as bad as the one it purports to salve.

If distractions are bad then fewer of them would be good, right?

But this approach requires conceptual – as well as principled – thinking. And that’s in short supply these days.

Consider, as a parallel example, the almost religious crusade against “drunk” driving. It has become almost as grave a sin as pedophilia. I won’t defend people who have imbibed to the point of actual impairment, but that’s precisely the point. Actual impairment – no matter its type or source – is not the object of witch-burning fervor. Just “drunk” driving – as defined by an arbitrary blood alcohol number. Thus, a guy with a .10 BAC who runs a light and T-bones a minivan and kills a family is considered a cretin – and (rightly) subjected to severe criminal as well as civil sanction. But an old person with glaucoma who can barely see anymore who does exactly the same thing is treated much more leniently.

Yet both chose to drive while impaired.

Does the form of the impairment make a difference?

Back to “safety” buzzers and lights. 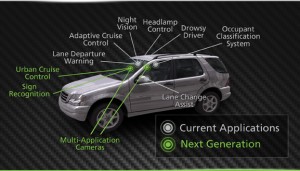 A cop will pull you over and ticket you for texting while driving because that’s “distracting” and presumably, “unsafe.” But the federal government can mandate (or the car companies fit their cars with) lights and buzzers that are objectively as or more distracting and that’s ok.

If I wreck because I was startled by a buzzer or momentarily distracted by a suddenly flashing red light, will the company that put this stuff in the car receive the bill for damages?

How about if I wreck because I can’t see what’s behind me on account of the twin Matterhorns (i.e., the huge “anti-whiplash” headrests that all new cars are afflicted with) which occlude my view to the rear by 30 percent or more?

Can I sue the bureaucrats at DOT who mandated these “safety” features?

Will someone give them a ticket… please? 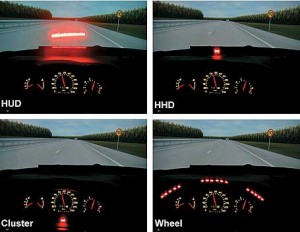 The irony is that while the cars of the pre Safety Cult era (circa 1980s and older) were less crashworthy, you were arguably less likely to have a crash while driving one. There were fewer distractions. And you could see.

In a very real way, those old “unsafe” cars were safer.

Moreover, you tended to pay attention to driving when driving one of them  – because the situation demanded it. Cars were not idiot-proofed in those days. People were expected to not be idiots.

As a result of this pressure, there were fewer idiots.

Today, the reverse. The cars are more capable than ever. The average driver, much less so – having been encouraged to be so.

He is no longer expected to pay much attention; to avoid collisions, wandering over the double yellow (and backing up over children) on his own. Technology will be his safety net.

And a net it surely is.