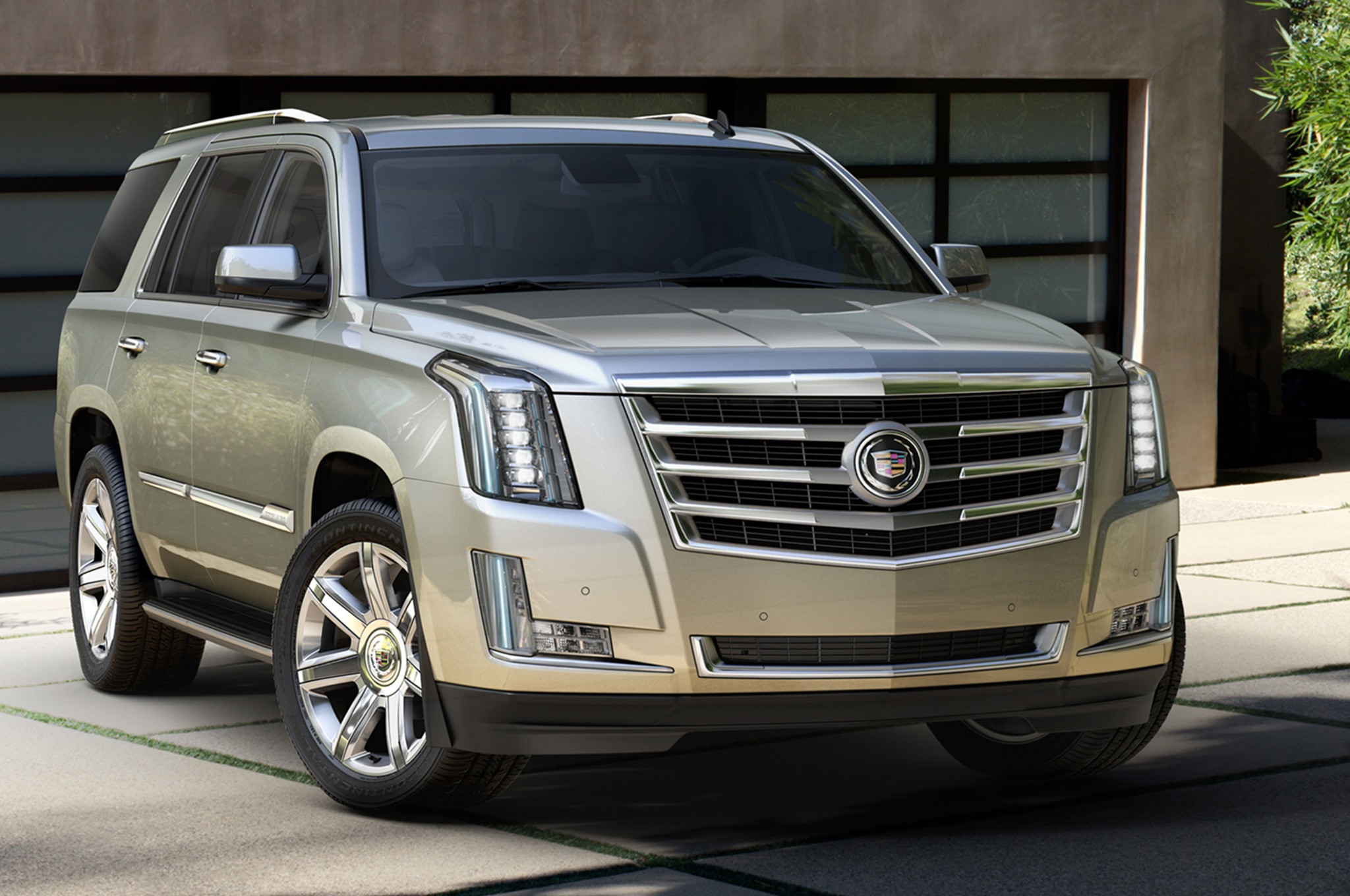 In its Mad Men-era heyday, a Cadillac was the ultimate, the most, over-the-top… and not the least bit shy about it. Big fins – and big V8s. 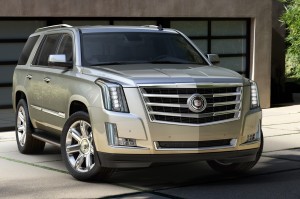 The Escalade is the end product of giving Cadillac designers a Chevy Tahoe and a blank check. The Tahoe’s still in there – somewhere – but you’ll never see it without peeling away layers of leather and velour, unbolting all that Cadillac-specific sheetmetal.

But then you’ll find a kinship with the Corvette – in the form of the 420 hp 6.2 liter V8 that powers the Escalade. And which outpowers every single would-be rival. 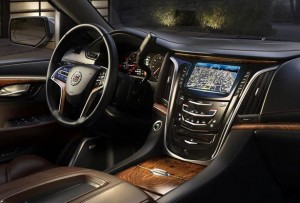 In comparison, the Lincoln Navigator is a super-sized blue light special. Its base price is just $61,480 – and you can buy the “L” stretch version for $67,220. But the once-proud Navigator (which beat the Escalade to market back in the ’90s and actually sold better for several years) no longer even offers a V8 engine and no matter how many turbos Ford (er, Lincoln) bolts to it, a V6 will never be a V8.

Probably the most direct-comparison cross-shop – at least in terms of shock and awe value – is  probably the Infiniti QX80. However it comes in one size only (in between the Escalade and Escalade ESV) and while it’s at least got a V8, it isn’t a 420 hp V8.

You might also consider the Lexus LX570 – but it’s getting long in the tooth (current model, same as last year’s model) is a smaller vehicle, can’t pull as much – and has a much weaker engine. 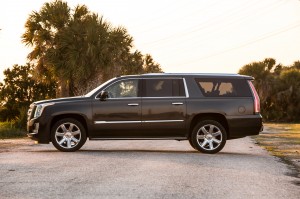 After last year’s complete overhaul, the ’16 Escalade receives a number of upgrades to its suite of standard and available electronic equipment, including Lane Keep Assist and service prompts sent to the owner via smartphone text or e-mail (Advanced Diagnostics). The CUE touchscreen interface in the center stack also has a faster processor for better performance (including faster map loading for the GPS) and the various driver-selectable appearance options for the main gauge cluster have been slightly reshuffled.

The heartbeat of a Corvette.

The most – of everything. 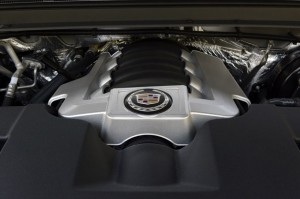 Sourced from the Corvette, the Escalade’s V8 makes an incredible 420 hp and 460 ft.-lbs. of torque. Put that engine in something that weighed a couple thousand pounds less (like a Corvette) and you’d have a supercar. Tasked with pulling what amounts to two Corvettes, the 6.2 V8 manages to deliver supertruck acceleration: Zero to 60 in about 5.8 seconds for the RWD Escalade; a few tenths more for slightly heavier 4WD versions.

To get a handle on that, ponder the fact that the Escalade – six thousand pounds or so, as tall as an NBA forward (well, almost) and with the aerodynamic slipperyness of a pinball machine on roller skates – is only about 1 second or so off the 0-60 pace of a new Camaro SS.

And the Camaro can’t pull 8,100 pounds – much less carry seven people along for the ride.

And it does not have 4WD. 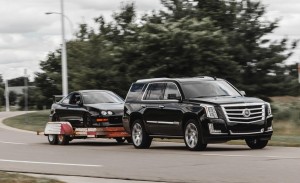 The Caddy’s system does not have a two-speed transfer case or 4WD Low range gearing. That plus those 22-inch rims and short sidewall sport tires are not the ticket for snow-day driving.

Think twice about wet grass, too.

If you need off-road capability, check the Infiniti QX. As of this writing in mid-summer 2015, it is the only super-sized SUV you can still buy that has a 4WD system with a two-speed transfer case and Low range gearing.

The Escalade is kind of like Mr. T in Rocky III. Mean and surly. Eye of the tiger. 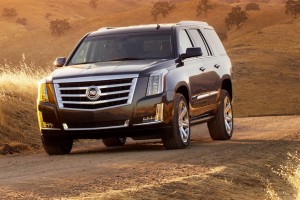 Its Corvette-sourced 6.2 liter V-8’s 460 ft.-lbs. of torque (and 420 hp) is pure delicious overkill. You could probably pull a spark plug wire, run the thing on seven cylinders – and still outrun the Navigator. And on the highway, thanks to the eight-speed automatic’s deep overdrive gearing, the revs at 75 are just over 2,000. This makes it feasible to travel almost 550 miles on 26 gallons of fuel.

That’s about as far as a Prius will go on a full tank, by the way.

I was able to truck down to Raleigh, NC from my home base in the Roanoke, VA. area – a trip of about 250 miles – without stopping for fuel on the trip down – or back. And the Escalade’s passing power at 70 is (trust me) much superior to that of the Prius. 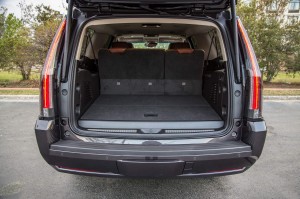 The ride – especially Limited (and up) models with the 22 inch wheel/tire package – is stiff. Which is to be expected, because there’s just not much give or cushion available when your tires’ sidewalls are only about two inches high. These “rims” are the vehicular equivalent of holding a Glock sideways. Maybe it’s stylish – but it’s functionally pretty stupid.

The huge wheels also increase rolling resistance. With less obstreperous “rims,” the Escalade would be even quicker and – not that anyone cares at this price point – probably get better gas mileage, too.

The Navigator comes standard with more functionally sensible 18 inch wheels – and not surprisingly, has a much softer, more luxurious ride.

On the other hand, the low-aspect-ratio tires do give the Caddy sharper response to steering inputs. And they do a very effective job of reducing body roll to almost nil. 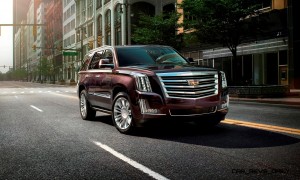 All the vehicles in this class are lunkers, but the Escalade doesn’t feel its size because it has a tighter turning circle (39 feet) than either the QX80 or the Navigator (41.6 and 43.9 feet, respectively). This makes it noticeably easier to maneuver in tight confines such as the car-crowded parking lot of a fast food joint. It also sits lower than either of its two competitors: 74.4 inches for the Escalade vs. 78.1 for the Lincoln and 75.8 for the Infiniti. This makes it less awkward to deal with drive-throughs (as at banks) and low-ceilinged parking garages. No doubt, the Escalade’s lower-in-the-weeds stance also enhances its stability at higher speeds.

It is, however, wider than its rivals: 80.5 inches vs. 78.8 for the Nav and 79.9 for the Q. This makes parking public parking spots (which are generally designed for Camry-sized cars) seem all the smaller. 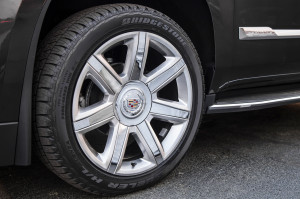 I like the new capless fuel filler system. It’s convenient – and much less messy, an important consideration when considering a premium vehicle. You will not have to worry about griming up your hands on the gas cap, because there is no gas cap. Just push the fuel pump’s nozzle in the hole.

The pump, however, is not under Cadillac’s control.

The main gauge cluster is driver-configurable and now entirely flat-screen. This is the trend in high-end cars, for two main reasons. First, it looks slick. We live in an iPad Age and old-style analog gauges look so… 1990s. Second, they’re configurable. More information can be displayed – called up at will by scrolling through the various menus. With fixed-in-situ analog gauges, you can only fit so many gauges (and so much information) in the limited space available. 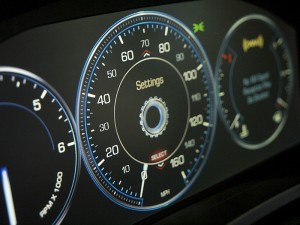 The flat-screen theme continues to the right of the main gauge cluster, where there is a secondary eight-inch LCD via which you access/operate the audio system, GPS and various apps. Cadillac styles this the CUE – Cadillac User Interface. If you like iPads, you will like the CUE. It works pretty much the same way. It has text-to-voice and Siri Eyes Free capability, too.

Below this are the controls for the AC/heater. They are not flat screen. They are “haptic” – GM’s term for finger-swipe (and tap) control inputs. My only beef with it is that sometimes you get too much (or not enough) of what you want, such as more or less fan – because it’s fairly easy to swipe too far (or not far enough), especially with the vehicle in motion.

The Escalade is big – but it’s not the biggest.

Not the standard model, anyhow. 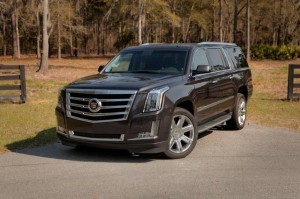 This might just be “just right” sized – big, but not too big. I can vouch for the Q being a bus. A nice bus.

The Escalade is big – but manageable. See points made earlier about turning circle, ride height and steering response.

And if you do want more metal – even more than the Q – there’s the Escalade ESV. It’s almost two feet longer than the regular Escalade. That’s also longer (by about an inch) than the Lincoln Navigator “L,” too. (And don’t forget: The regular length Lincoln is underpowered; imagine how much more underpowered the longer – and heavier – “L” version is.) 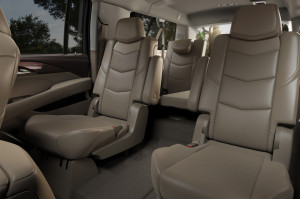 The Caddy also has much more headroom than its rivals: an NBA forward-friendly 42.8 inches – vs. 39.5 in the Lincoln and 39.9 in the Infiniti.

The third rows in all these rollers are compromised because they sit on top of the rear axle, which means the floorpans have to be higher in the third row than in the second row. This is the chief deficit of the RWD-based layout (and why FWD-based crossover SUVs are more space-efficient inside). But, though you sit with your legs tucked up a bit, there is decent legroom – and the third row is thus usable by most adults and absolutely fine for young kids and teens.

The Escalade’s second and third rows also fold flat – and at the touch of a button. This creates a total of 94.2 cubic feet of space – enough to easily cart home a full-size outdoor gas grille with accessories. I know it can, because I did exactly that with my test Caddy.

Per the Mad Men meme, Cadillac has been dialing up some classic-era Cadillac themes (no, not fake convertible tops and opera lights on the C pillars). These include very tall – and very thin – taillights whose shape evokes the classic look of Caddys from the late ’50s and early ’60s. Up front, a massive chrome grille is set off on either side by inverted L-shaped headlights with five stacked individual LED projector bulbs.

If they ever reboot Mad Men – fast-forward it to our time – this is what a latter-day Don Draper would be driving. 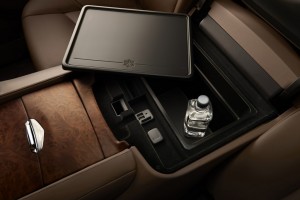 You can order everything imaginable – just about – that might be on a just-signed first-round draft pick’s wish list, including Blu-ray player and power retracting steps with puddle lighting.

WiFi “hot spot” take-it-with-you Internet access is also on the menu – and (for 2016) the Escalade will send text messages or e-mail when it needs servicing. 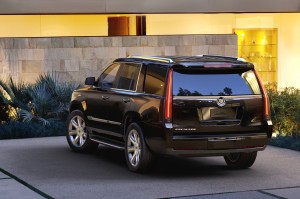 Instead of bending with the prevailing winds of political correctness and downsizing, de-powering or even outright dropping  V8s from the roster, Cadillac installed a bigger and stronger V8 in the Escalade.

This is a very large part of the Escalade’s appeal. Of Cadillac’s appeal. It is not for people who are ashamed of what they make – or how much gas they use.

So do enough other people to keep Cadillac in the black.

Nothing else rivals the Escalade for power/performance – or testosterone overflow. Who needs Viagra when all you need to do is stand near one of these things?

Like it – or loathe it – the Escalade is the Cadillac of super-sized SUVs. 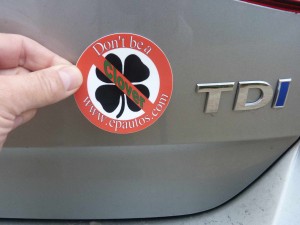