Licenses are chicken and egg. To qualify for, say, a road racing or heavy truck (commercial) license, one must already have attained the necessary skill. The license is a kind of after-the-fact “yep, he can do that.”

But the fact is he could already do that.

Was he any less able as a road racer or heavy-truck driver the moment prior to the state’s conferring of its seal (and permission slip)? Does possession of the permission slip make him more able?

Learning – and acquiring additional skills – that’s great. Whether we’re talking reading more books or attending Bob Bondurant’s school of high-performance driving. But this granting of permissions (always conditional, often arbitrary) by the state – whether for driving or other things – is inherently dangerous, on multiple levels, as well as (arguably) a moral wrong. 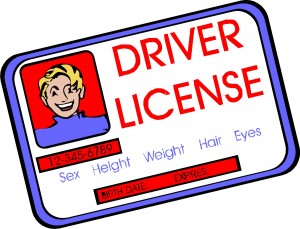 Dangerous because it presumes the state is the infallible arbiter of competence. This is so obviously false that further discussion ought not to be necessary. Unfortunately, it is necessary because it’s not obvious to all too many people. Who fail to notice that there are plenty of incompetent – but fully licensed – drivers as well as doctors and many other such. Licensing is dangerous precisely because people have been conditioned to presume that someone who is licensed is (ipso facto) competent. If that were the case, the medical malpractice court docket ought to be a tenth of what it actually is. And road Clovers who tailgate, refuse to yield, have great difficulty parallel parking – and so on – would be on the bus instead of behind the wheel.

And yet, they abound behind the wheel. How is this possible?

At the same time, competent people are excluded or restricted – and punished – not for any lack of competence but merely because they lack the state’s permission to do “x.”

A good example being kids in rural areas who grow up around machinery and who are often operating heavy machinery such as tractors and balers before their voices begin to change. By the time a country boy is 14 or 15 years old, he may have more experience behind the wheel (of many things) than most 25-year-old city boys. Yet he’s not allowed to drive – legally speaking – until he turns 16 and obtains the necessary permission slip and even then, in most states, his permission slip (license) is restricted.

This is idiocy – and unfair.

But that is what the state specializes in.

And gets away with – because of the weird habit of mind that afflicts all too many people which causes them to ascribe perfect wisdom or at least superior judgment to this construct called “the state” – which when you think about it has no real existence whatsoever. There are only people – some of them invested with authority over other people. But the very justification given for the conferring of this authority – that people cannot be trusted, are irresponsible, exercise poor judgment, require supervision – applies just as much to the people invested with authority as it does (if we accept the premise) to the people over whom authority is exercised. It must be so, logically – unless one takes the position that people invested with authority are superior people – and it’s pretty clear in most cases they’re not.

Often, to an appalling degree.

We’ve got people with liberal arts degrees – social studies, “education” and so on – dictating to engineers how they’ll design cars. And how about the people who set the terms and conditions for driving permission slips (i.e., licenses)? Are they superior drivers?

According to what standard?

By what right do they presume to decree terms and conditions? 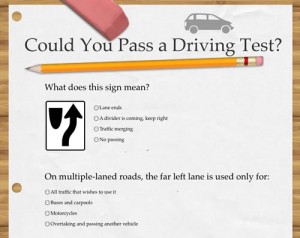 Besides which, most of these terms and conditions are farcical.

You’ve probably taken the state DMV’s “driving test” – which typically involves very little (and sometimes no) actual driving. But lots of touchscreen test-taking. How many feet behind a fire truck must one remain? Is it ever legal to drive faster than the posted speed limit? Remember to buckle up for safety.

A particularly silly example of licensing redundancy is motorcycle licensing. If one is able to ride a motorcycle to the DMV then presumably one knows how to ride a motorcycle. What purpose does a test around the cones in the DMV parking lot serve? I mean, other than to waste the rider’s time and take some of his money?

And sometimes, having a license – even a high-end license – is of no help at all. Demonstrated above-average proficiency does not entitle the holder of the license to special consideration. The holder of an SCCA road racing license (not easy to get) is held to the same arbitrary (and usually, very low) standard as everyone else. Go to court and see for yourself.

Most cops do not hold SCCA (or WERA) or any other high-end license. Yet they not only “speed” with near-impunity they routinely hand out tickets for exactly that to people who do have SCCA (or WERA) licenses. Which is kind of like a social studies graduate dictating car design parameters to engineers.

If competence were the standard, then competence would be an absolute defense. A top-drawer mechanic would not need permission to open a  shop and his customers would rely on his demonstrated ability to fix their cars instead of a piece of paper tacked to the wall. He would not be subject to fines – and worse – for wrenching competently but without permission.

A person pulled over for “speeding” could pull out his road racing license as proof of his extra training and demonstrated superior skill. Absent evidence to the contrary – an accident, loss of control – the SCCA license holder would be presumed competent to drive at higher speeds and not fined and punished.

Licenses, then, are not about establishing competence to do something. They are about exercising control over something. Over some people.

It’s a con – but a very effective one. People fall for it because they’ve been conditioned to fall for it. Government schools and social conditioning have seen to that. The Myth of Authority is pervasive – and (mostly) unquestioned. This notion that some are made to rule and others bound to obey. It is the water in which we swim; the air we breath.

Expose that shameful secret and the world changes overnight.

How the New Mileage Tax Will Get Your Old Car...