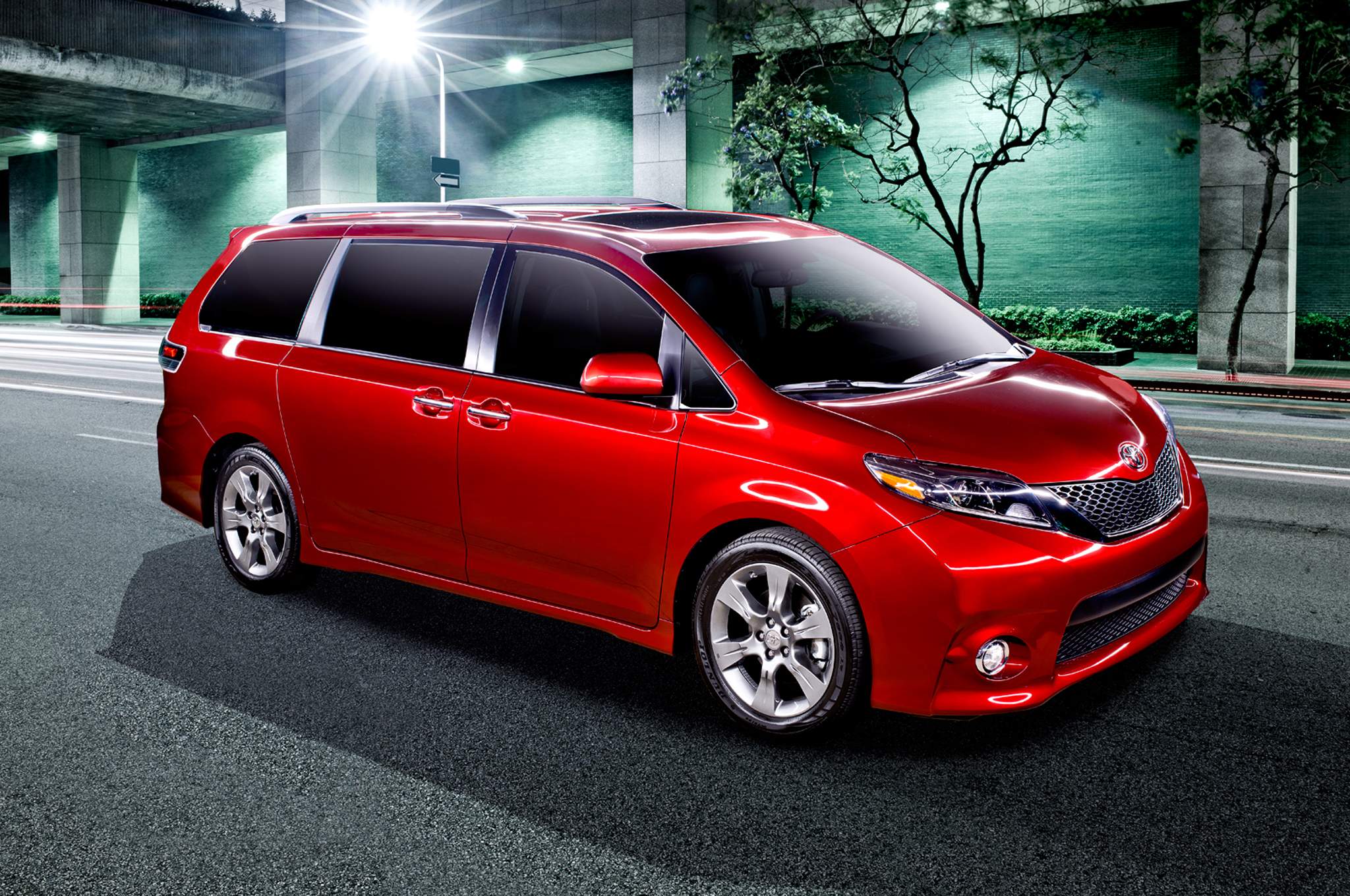 The Minivan World has changed a lot since the first batch of them came out in the early ’80s. They actually were “mini” vans, for openers. Not much bigger than a car – being based on small cars, like the Chrysler K-cars. Today’s vans – like this Toyota Sienna – are as far from being “mini” as Shaquille O’Neill is from being skinny. 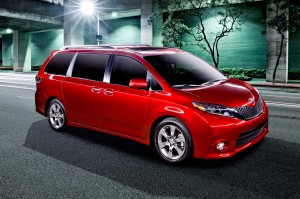 Minivans today are as much for affluent empty-nesters as the original-era vans were made for carrying a bunch of greasy-fingered kids from Here to There without giving a damn if they spilled juice on the leather.

Because there was no leather.

Well, here we are.

You could still use the Sienna – or its two main rivals, the Honda Odyssey and the Chrysler Town & Country – for hauling kids around. But they’re more like downscaled luxury RVs now than utilitarian appliances.

With prices (and appetites for gas) to match. 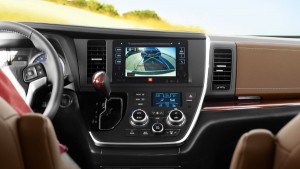 They all start close to $30k – and optioned out, it’s not hard to be staring down the barrel of nearly $50k.

But which to pick?

The Sienna is a full-size (and not so mini) van. It’s available in either 7 or 8 passenger seating configurations – and unlike its rivals, with (or without) AWD.

A top-of-the-line AWD Limited with the Premium package has an MSRP of $46,250. 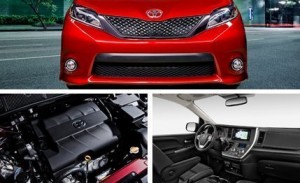 While the exterior differences are minor and hard to discern without looking closely, the ’15 Sienna has a redone interior and the suspension/body structure have been significantly updated for improved ride quality and road feel.

It’s still a big bus – but feels less like a big bus. 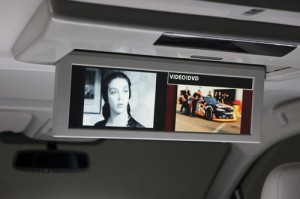 Available just about everything (including an oversized split-screen LCD rear seat entertainment system).

Pricey relative to rivals. A Limited Premium Sienna’s MSRP is almost $6k higher than a top-of-the-line Town & Country’s. (But the Toyota does come with AWD). 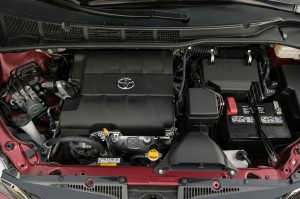 Now that the 2.7 liter four has been retired, all Siennas come standard with the 3.5 liter V6 that was formerly optional in the lower trims. It’s the same engine as last year, making 266 hp – which is still more than the Honda Odyssey’s standard 248 hp 3.5 liter V6. The recently redesigned Chrysler Town & Country’s class-leading 283 hp 3.6 liter V-6 is the most powerful – on paper – of all current minivans engines.

But wait a minute for the scoop on that.

The Sienna’s V6 is paired with a standard six-speed automatic, which has a manual shift “sport” mode.

Buyers can choose either FWD or go with a full-time AWD system – a feature not offered in any other minivan currently on the market. 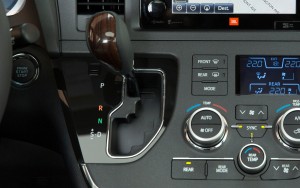 Honda’s Odyssey needs 7.9 seconds. And that van is not available with AWD, either.

Interestingly, the most powerful-on-paper of these vans – the Chrysler T&C – is a bit of a slow-mo. It needs 8.3 seconds to get to 60. That’s almost a full second behind the Toyota van. This is odd given the Chrysler’s lighter than the much quicker Toyota: 4,371 lbs. vs. 4,540 for the Sienna. Something doesn’t quite add up. Maybe Toyota is under-rating the output of the Sienna’s V6.

Or perhaps Chrysler’s exaggerating the output of its V6. 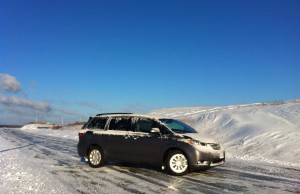 Gas mileage-wise, the Sienna’s a pig. They all are.

In real-world driving, a Sienna with AWD will average mid teens. That is a ferocious appetite for such a seemingly responsible vehicle.  Want a comparo? The 707 hp Dodge Hellcat – a brutal 200 MPH muscle car with the most powerful V8 ever put into an American production car – manages to rate 13 city, 22 highway.

Now you know why AWD is so uncommon in this segment.

But the FWD competition isn’t much better.

If gas mileage is a consideration, you probably ought to consider something else.

Time gives perspective – and appreciation – for the engineering Great Leaps Forward made over the past 25 years. The first-generation minivans of the early-mid 1980s (the Chrysler vans)  were basically compact-sized economy cars (K-cars) with a box bolted on top of them. They felt cheap, they looked cheap – and they drove cheap. They had just enough power to get where you needed to go – provided you weren’t in much of a hurry. 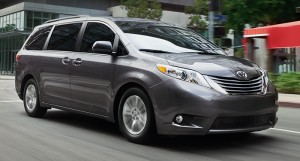 There was not much to like about them except their utility – and cheapness.

A modern minivan like the Sienna is a completely different animal. It is huge – and ingot-solid.

Powerful, quiet – and luxurious, too.

Even the formerly available four cylinder was making about as much horsepower as mass-market V8s were back in the 1980s.

The now-standard V6, meanwhile, makes more hp than a V8 Corvette was putting down back around ’85. 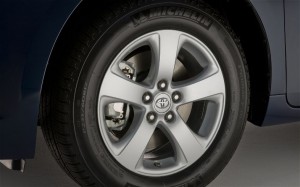 Rolling stock provides another barometer of the changes. Even the base L trim FWD Sienna LE comes standard with 17-inch alloy wheels and if you want, you can order a Sport package that ups them to 19 inches.

This minivan offers a more aggressive wheel-tire package than a mid-’80s Corvette!

Stamped steel 16 inch wheels and low-cost all-season tires would seem like the right choice for a utilitarian family-hauler. But minivans like the Sienna and its main rivals aren’t basic transpo family-mobiles anymore. Haven’t been for years. They’re more like custom conversion vans were back in the day: As much for adults as for kids. The buyer demographic for vans like the Sienna has shifted. The typical buyer is older – and more affluent. He needs to be. The typical profile is an affluent empty-nester less worried about how many juice box holders the thing has than what the resolution of the DVD entertainment system is (very high, in this case)

People who buy these things expect more – so Toyota gives them more. 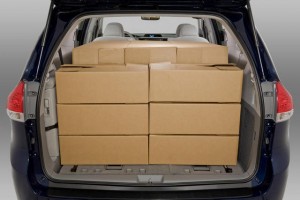 The Sienna is big.

Despite its size, the Sienna is very manageable to drive. From behind the wheel it doesn’t feel as big as it really is – probably because most of the length is behind you. There’s only about three feet of Sienna from the windshield forward. The front end is very stubby – which is helpful because it makes it easier to judge how much of a margin you’ve got available during parking maneuvers. The “one-finger “electric-assist power steering helps with close-quarters docking maneuvers, too.

It’s also very easy to get into. No need for deploying running boards, step ladders or grab handles. You literally almost walk into the thing. 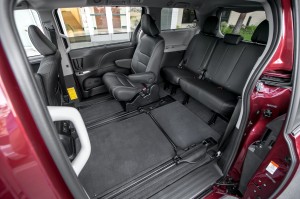 So, it’s bulk notwithstanding, the Sienna is quite car-like, for the most part. Its Large Marge proportions only become apparent when you’re backing up – and when you slide the thing into your garage. The rearview is also pretty occluded due to the high seatbacks of both the second and third row (though the third row’s headrests can be folded and of course, so can the seats) and relatively small rear glass area. The now-standard back-up camera helps, but it’s small, has limited peripheral view. So, be careful when backing-up – and also when easing it into the garage. The Sienna eats up about as much space as a full-sized SUV.

Well, it’s a minivan. What are you gonna do?

Even though several major car companies – Ford and GM – have entirely dropped traditional minivans from their product portfolios, they weren’t dropped because the concept is unsound. If that were the case, then crossovers would be dying off, too. 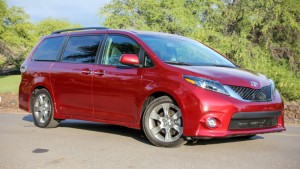 Crossovers are popular because they offer more or less the same utility/practicality in a different wrapper. They are minivans on the down-low.

Meanwhile, what of the remaining “out of the closet” minivans? The focus is now on luxury as much as utility.

Witness the available second row captain’s chairs that have fold-out footrests that ride in long-travel tracks that allow the chairs to be pushed back so far that you can’t touch the backs of the front seats with your feets. On Limited trims, the third row seats power fold themselves into the floor at the touch of a button. There is also a 10-speaker JBL surround sound audio system, heated steering wheel, an almost 18×7 drop-down (and split screen) DVD player, power folding outside mirrors, adaptive cruise control… und so weiter. 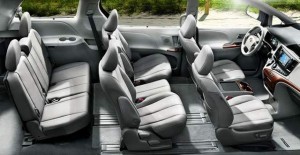 Equipment no circa Reagan Years Grand Caravan ever even offered.

Of course, the others (Odyssey and T&C) offer such equipment as well. Which accounts for their nearly $30k to start MSRPs – and the often close to $40k out-the-door price.

For  a minivan, it’s not a bad looker. In fact, if you look at it from a certain angle (like above) you’ll see at least a few interesting angles – more like sweeps and scallops, actually.

You can even order a sporty Sienna. 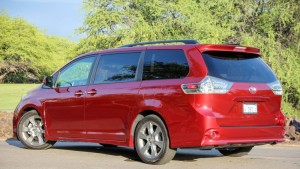 That would be the SE – which is rides on low-profile 19-inch wheels, has an angrier-looking front clip with built-in foglights and lower body side skirts. The suspension is also firmed up some over the standard calibrations – and inside, you get perforated leather seats with heaters and a sportier-looking gauge cluster.

Of the three, Sienna wins on cargo space. With the second row seats out and the third row folded, there’sa total of 150 cubic feet of open space gaping behind that liftgate – vs. 148.5 in the Honda and – surprisingly – 143.8 in the T&C. Surprising, because the T&C is physically a little bigger than both the Sienna and the Odyssey. Another surprise is how little space you get in the Nissan Quest – which is also larger overall than the Sienna (200.8 inches, stem to stern, vs. 200.2) but which has much less cargo capacity: a mere 108.4 cubic feet. 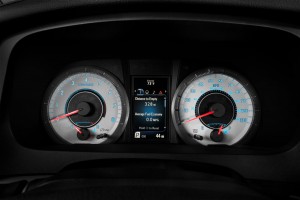 It’s odd that Nissan upsized the Quest – ostensibly to make it more competitive with the Sienna, Odyssey and T&C – but ended up with a van that’s still a lot smaller on the inside than all of them. On top of that, the Quest has lost its formerly sporty personality. Well, its sportier-than-other-vans personality. Now it’s just a big van with less space than other big vans.

It’s strange that – so far – no one has thought to offer a hybrid minivan.

The platform – and mission – would seem to be ideal. Here you have a large vehicle (plenty of room for batteries/motors) that’s generally used for lower-speed touring/cruising duty. Vans make for great taxis, too.

But so far – nothing. Other than heavy gas bills. 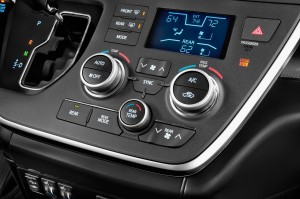 A diesel engine would seem like the ticket, too. But again, no joy.

Something – anything – to crutch the god-awful gas mileage of these things. Even leaving aside the CAFE issue. I mean, if you’re driving a Hellcat then 13 MPG isn’t so bad.

That’s my chief beef with the Sienna – with all of them. For what they are – and what they’re for – they’re almost disgustingly profligate at the pump.