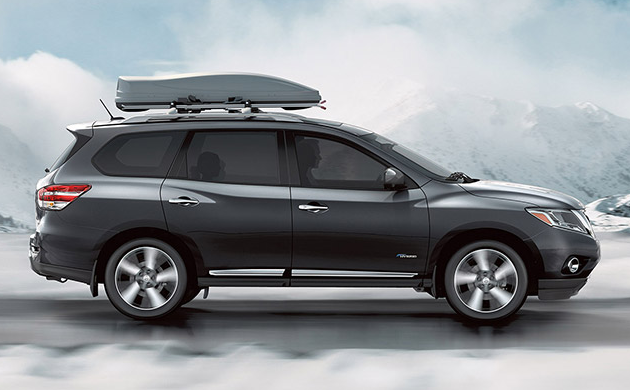 One of the few holes left in the current car market is the one for a full-sized/three-row people-carrier that’s available with all-wheel-drive but which is neither a minivan nor an SUV … and which you can buy for just under (or maybe a little over) $30k. 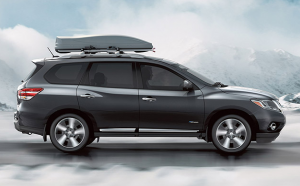 It’s a hole the Nissan Pathfinder is trying to fill.

The Pathfinder is a full-size crossover SUV.

It’ll take seven people in three rows, like a minivan. But it doesn’t look like one – and (unlike almost all of the minivans left on the market) you can buy it with AWD.

A fairly rugged AWD system, too.

One with a “lock” feature that maintains a 50-50 power split, front to rear. This gives the Pathfinder notched-up tenacity in poor weather vs. the lighter duty all-wheel-drive systems in other crossovers that just see-saw the power between the front and rear wheels. The Pathfinder’s system can also be driver-toggled from “2WD” (front wheel drive) to all-wheel-drive.

Nissan labels this  “4WD” – which sounds manlier but amounts to the same thing.

The system comes with Hill Descent Control, too. 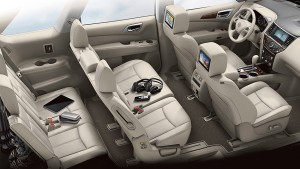 A top-of-the-line Platinum trim with AWD (and lots of other stuff, including a 20-inch wheel/tire package and the ability to tack on – for a bit more coin – a dual-DVD flatscreen entertainment system) stickers for $43,100.

The Pathfinder’s most functionally and otherwise similar competition is the also three-row/full-size Mazda CX-9, which starts at $29,985 for the base FWD Sport trim and which you can also add AWD to for just over $31k ($31,575 to be precise).

Nissan has added Hill Descent Control to all AWD-equipped Pathfinders and tailored the operation of the standard (in all Pathfinders) continuously variable (CVT) automatic transmission to more closely mimic the operation of a conventional automatic. Though a CVT transmission does not have individual gears – and so, does not upshift or downshift like a conventional automatic – it can be programmed to feel as though it does.

And that’s what Nissan has done.

You can also get a blind spot warning system and rear cross-traffic alert (both are standard in SL and Platinum Pathfinders). 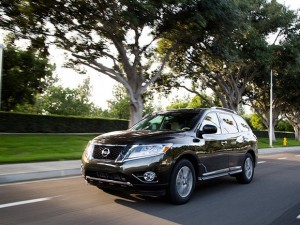 A minivan in function but not appearance… with more functionality than any minivan offers.

Go easy on the options and it’s a relatively affordable family-mobile.

Some potential buyers may prefer the operating characteristics of competitors’ traditional six-speed automatics over the “gearless” (though shift-mimicking) operation of the Nissan’ CVT automatic.

Gets pricey when optioned out. 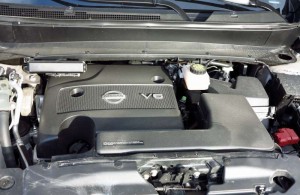 All Pathfinder trims come standard with Nissan’s well-regarded 3.5 liter V6, which consistently scores well in long-term reliability consumer surveys. It is essentially the same engine used in the Z sports car, just not as large (the current Z’s version is  up to 3.7 liters now) nor as strong (the Pathfinder’s version makes 260 hp vs. 332 in the Z).

It’s paired with a CVT automatic, as described above. The CVT is a unique feature in this class, where conventional (geared) automatics are the rule. 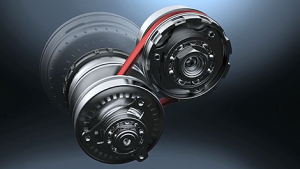 Regardless, the Nissan’s the clear winner at the pump – and much of the credit is due the CVT automatic.

But the Nissan’s performance – its acceleration – is a bit under par. Which is also a function of the CVT (which is, again, designed to be maximally efficient rather than the hot-box for the quickest 0-60 run).

FWD Pathfinders need about eight seconds to haul themselves to 60; the heavier AWD versions take a little longer.

This isn’t bad. (For perspective, a Prius hybrid is about two seconds slower.) It’s just not as good as the much quicker Mazda CX-9, which can get to 60 (FWD versions) in about 7.4 seconds.

On the other hand, the GMC Acadia – despite being the strongest-engined of the bunch (3.6 liters, 288 hp) is also the slowest of the bunch. Zero to 60 takes 8.5 seconds for the AWD version – which isn’t surprising given it’s the biggest (and heaviest) of the bunch. The 4,850 pound Acadia weighs an astounding 566 pounds more than the Nissan.

No wonder it’s slow – and thirsty!

The Pathfinder occupies the middle ground between the luxurious – but ponderous – GMC Acadia and the suppler/sportier Mazda CX-9.

One objective way to quantify this is by looking at these three rides’ turning circles. The Acadia is not cul-de-sac friendly. Cue Yoda voice… 40.4 feet it needs to come around. Stack that up against the Mazda – which only needs 37.4 feet.

If it had another 20-30 hp under the hood – or maybe just a conventional six-speed automatic in lieu of the CVT – it’d be a much closer race. The Mazda’s number one-sportiest slot could easily be snatched away by an infusion of some more Z car DNA into the Pathfinder. 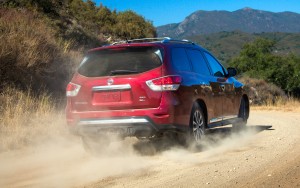 The Pathfinder also strikes a balance between the Mazda and the GMC when it comes to Bad Weather Day bona fides. The Acadia and CX-9 both offer AWD (and the Acadia has more ground clearance, 7.6 inches vs. 7 for the Nissan) but neither can be locked so as to maintain a steady 50-50 power split between the front and rear wheels – which is what you want (what you need) for anything hairier than an already plowed (and paved) driveway.

The Mazda and GMC AWD systems simply auto-route the power from front to rear in varying ratios. The Pathfinder’s unique in having the “lock” mode – as well as being able to disengage the rear wheels entirely, so that all the engine’s output flows through the front wheels only. The advantage being better mileage (because less drivetrain drag) and also – likely – less wear and tear on the AWD system over time.

As mentioned earlier, Nissan has added another level of capability to its AWD system by adding Hill Descent Control, a feature that’s common in real-deal SUVs but exceedingly uncommon in crossover SUVs. When engaged, it uses throttle and transmission control (actuated and controlled by the vehicle’s computer) to provide an engine braking effect when descending steep grades. This keeps you from having to use (ride) the brakes, which lowers the chances of a skid and loss of control. It also keeps the brakes from getting too hot – and the pads from wearing out too soon.

Another  admirable quality of the Pathfinder’s (and to be fair, its rivals, too) is a smooth, composed and quiet ride. Crossovers do a much better job here than truck-based SUVs, which is one of the main reasons why crossover SUVs have become so popular while SUVs are returning to the niche they occupied before crossovers existed – and people had to pick either a car or a truck-based SUV.

And accept the plusses as well as the minuses of those differing layouts. 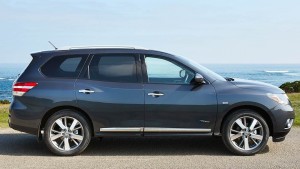 It’s big – but not overwhelming.

For some sense of scale, it’s helpful to compare the Pathfinder with a full-size/three-row SUV. Like Nissan’s own Armada, for instance. Which is about a foot longer, stands eight inches taller and galumphs along on a Queen Mary-esque 123.3 inch wheelbase (vs. the Pathfinder’s 114.2 inch wheelbase). The Armada also weighs a pavement crunching 1,200 pounds more (yes, you read that right), has a nearly 41 foot turning circle and never gets out of the teens, mileage-wise. 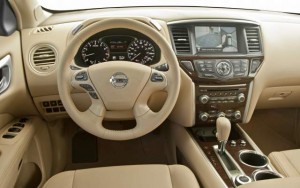 Yet the Pathfinder – lower to the ground, not nearly so top-heavy (or heavy, period) and vastly more maneuverable – has about the same (or more) passenger room in both its first and second rows. And its third row is more usable because (being based on a FWD layout) there is no huge hump in the floorpan for the rear axle underneath (as in the Armada), so passengers don’t have to sit, fetal-style, with their legs bunched up against their bellies.

This, in a nutshell, is why crossover SUVs are increasingly preferred over SUVs.

But how does the Nissan stack up to other (rival) crossovers? In some ways, better – and in some, not.

The Nissan has a roomier first and second row than the larger CX-9 (especially as regards the second row, where there’s 41.7 inches of legroom in the Pathfinder vs. 39.8 in the CX-9) and – very surprisingly – much more second row legroom than in the even larger GMC Acadia (36.8 inches, cramped for such a big ride). 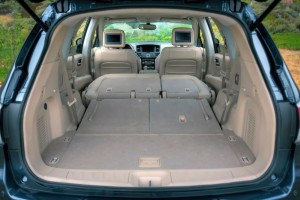 Still, the Nissan is by no means lacking in space. It just has less space than its two main rivals. If you don’t need the extra cargo room – but like having more generous people room, you may prefer the Nissan’s distribution over that of its rivals.

A reader once suggested to me that vehicles like this would be great – or rather, better – if they had sliding doors like minivans do. Very true. But then, they’d be out of the closet – no longer able to operate on the down low. 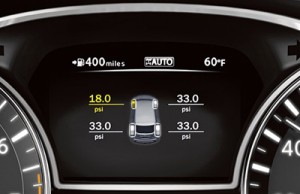 And that’s why these two-third minivans/one-third SUVs do not have sliding doors – and never will.

They could – and should – have diesel engines, though.

But a diesel would give you mid-30s instead of low-mid 20s (on average). You can find such deliverance in higher-end crossovers like the Audi Q5. But they would make lot more sense in mid-priced and family-minded rides like the Pathfinder. People spending say $35k on a vehicle tend to care about fuel economy more than people who spend $50k on a vehicle. Yet – for the most part – diesels are offered in the $50k stuff rather than the $35k stuff.

It makes about as much sense as buying Ray Charles a really nice print for his birthday.

The “surround view” 360 degree camera Nissan offers as an option (standard in higher trims) is very cool. So also the tire pressure monitoring system – which not only tells you what the pressure is in each tire from behind the wheel, but also tells you when you reach the proper inflation pressure when you’re outside the car, air hose in hand. The Pathfinder’s horn beeps when you reach the appropriate PSI.

The LCD monitor/mouse input is self-explanatory and easy to operate while driving. You can order a dual-panel sunroof and even a 20-inch wheel/tire package (gnomesayin’?) 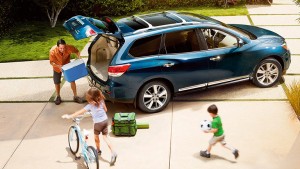 On the other hand, wireless connectivity is a bit dated (Bluetooth isn’t standard and even in models that have it, it’s not as up to date as the systems available in rivals. There’s no voice to text function, for instance.

Mostly, these are small gripes.

If you need the room… but not too much room… and don’t want a minivan… but need AWD… but not the gas bills or the Herman Munster handling… well, Nissan’s singing your song!