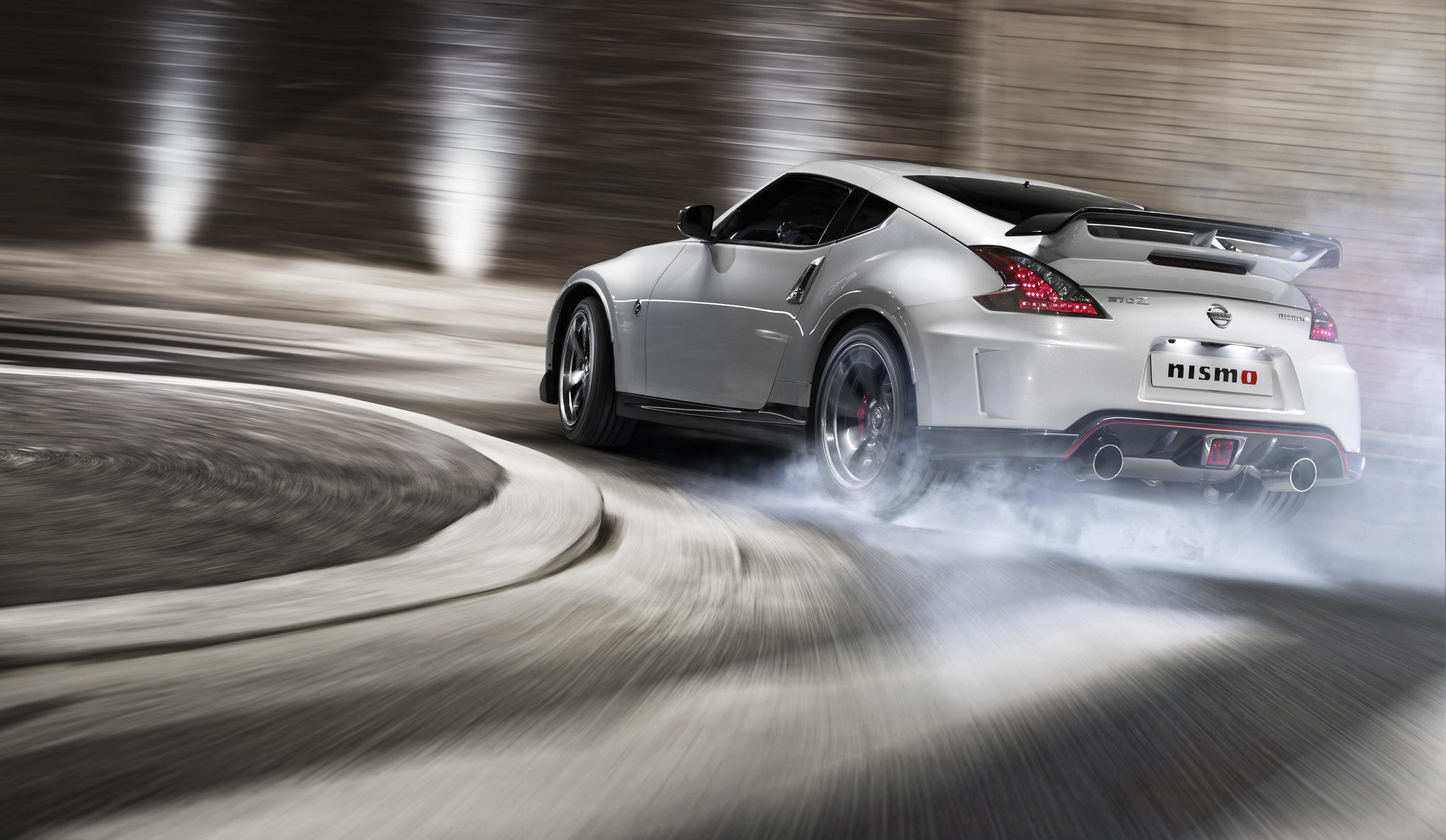 When you’re the only girl in a room full of single men, getting attention’s no problem … even if you’re only a strong “7.5”.

Some – like the new Corvette – offer much more engine and scorched-earth performance in a straight line and everywhere else, too … for not too much more money.

Others – like the Scion/Subaru “twins” (FR-S and BRZ) have much lower price tags – and while they may not be quite as explosive coming out of the chute, they nonetheless can corner with the best of them. 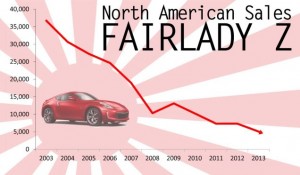 Some – like the new turbo four-cylinder Mustang – split the difference, offering close-to-Z-car-acceleration, lots of fun in the handling department… at a very manageable price.

It’s not because the Z-car sucks.

Believe me, it far from sucks.

The problem is arguably one of positioning – and pricing. 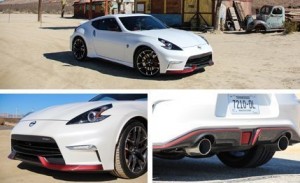 Nissan could lower the Z-car’s price (what have they got to lose at this point?) and thereby make it more cost-competitive with the great handling but slow-pokey Scion FR-S/Subaru BRZ (and Mazda Miata).

Or Nissan could infuse the Z with some Skyline GT-R DNA and thereby transform it into a credible Corvette (and Porsche Boxster) cross-shop.

But – either way – something’s got to happen.

Or else another thing is going to happen. 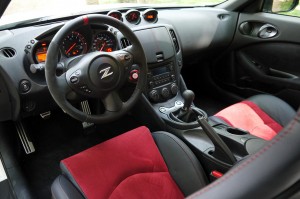 Like Elvis, everyone knows the “Z” car. It is Nissan’s signature sports car, with a lineage dating back to 1969 and the original 240Z. It went on hiatus from about 1996-2003, when an “all-new” 350Z was brought back to great applause (and initially strong sales).

The current Z-car  is the 370Z, reflecting its larger (and stronger) engine. But the basic car dates back to ’03 and the current model has been pretty much the same since 2009, when it received its last major mechanical (and cosmetic) update. 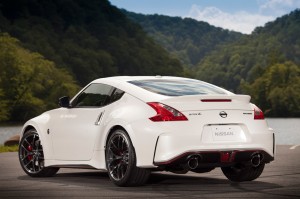 Nissan has shuffled some equipment and options, but the biggest piece of newness is that – for the first time – the Nismo version of the 370 is available with an automatic transmission.

Previously, this highest-performance version of the Z was manual-only.

A true sports car – but easy to drive every day.

Snug – but not confining – cockpit.

Much quicker than other price-in-the-same-ballpark Japanese sports cars.

Outclassed in a straight line by price-in-the-same-ballpark American (and German) sports cars.

Weighs too much; drinks too much gas.

Current design is nearly six years old – an aging fighter going up against much younger rivals.

Of the major Japanese automakers, Nissan is the only one that currently sells a mass-market two-seater sports car with more than 300 hp – and which is capable of getting to 60 in 5.1 seconds. 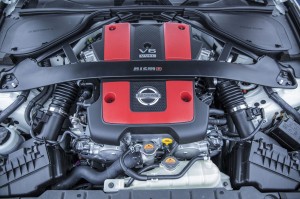 Base 370Z are powered by a 332 hp version of Nissan’s 3.7 liter DOHC V-6, paired with either a six-speed manual or (optionally) a seven-speed automatic. Sport (and Sport Tech) trims get upgraded versions of both boxes, with driver-selectable Sport mode that dials up throttle blip/rev-matching downshifts for smoother (and quicker) gear changes.

The optional Nismo package ups the ante to 350 hp – and you can now go manual or automatic (and whichever you pick, the throttle-blip/rev-matching feature is part of the deal). 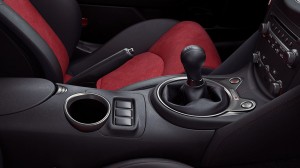 The hp infusion does not appreciably increase the car’s quickness, though. The Nismo Z gets to 60 in just over 5 seconds flat – about the same as the standard-issue 370Z. This may be due to the fact that the up-rated engine’s torque output (276 ft.-lbs.) is virtually the same as the non-Nismo’d Z-car’s (270  ft.-lbs.) and even the hp difference is not huge. The Nismo Z does sound tougher, though – due to the lower-restriction exhaust that comes as part of the Nismo packages’  enhancements – which also include higher-capacity brakes, a more track day-ready suspension and a pretty wild-looking body kit, with slats and air diffusers galore.

Another category that highlights the current Z-car’s deficits relative to the competition is its fuel efficiency. Like the zero to 60 numbers, it’s not bad – 18 city, 26 highway for the manual-equipped coupe. But the new Stingray Corvette – 460 hp, zero to 60 in 3.9 seconds – somehow manages 17 city, 29 highway. With a 6.2 liter V-8.

And the four cylinder (and 310 hp) Mustang mentioned earlier? It crests 32 on the highway and 21 in city driving. 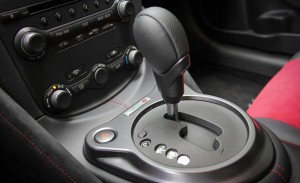 Then there’s the Sciobaru twins  – the Subaru BRZ and the mechanically identical Scion FR-S. They’re not as quick – zero to 60 in about 6.3 seconds – but they are considerably easier on gas – 25 city and 34 highway with the optional automatic. And they’re both a lot easier on the wallet: $24,900 for the base FR-S ($25,695 for the slightly pricier Subaru-suited version).

Like the cars it competes with, the Z-car is (and always has been) rear-wheel-drive-only. 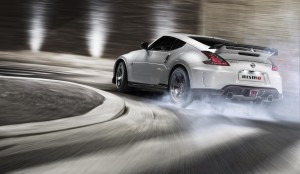 It’d be clearly quicker than its Japanese-brand rivals. But not too far removed from them in price.

And, contrary-wise, a $35k-ish Nismo 370 would be a no-tears alternative to a car like the new Stingray. The Corvette would still be the winner in a straight line, but the Z-car buyer wouldn’t feel like a loser given the $15k-plus additional he (hypothetically) didn’t spend on his car.

But – as it stands – the Z-car is in an unnatural and dangerous orbit; too close in price to cars like the Corvette – which can go toe-to-toe with literally any high-performance car you could buy right now, irrespective of MSRP (including Nissan’s own six-figure Skyline GT-R) and too far away from enjoyable indulgences like the FR-S and BRZ, which deliver on 9 out of 10 of the major sports car criteria, their only low score being in the category of straight-line acceleration. But, they can get away with it because they’re modestly priced. 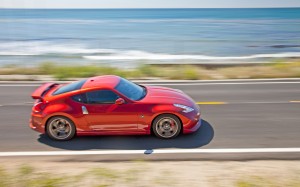 The Z-car is not.

If you’re on the road alone, there’s no problem. The car pulls hard – and corners better than most normal humans can deal with. The problem arises when you square off against a new EcoBoost (turbo four cylinder) Mustang and have trouble pulling away from it. Or when a new Stingray locks onto your bumper and you can’t shake him anywhere, whether the road is straight or curvy.

The knowledge he paid not much more than you did is depressing. 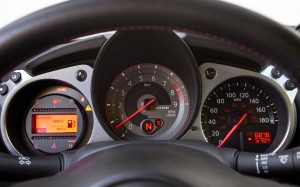 The tragedy – and the hope – is that this problem could be easily fixed. Surely, Nissan could squeeze the 3.7 V-6 to say 400 hp. Whatever it takes to get the 0-60 time down into the mid-fours and maybe put some air between the Z and cars like the four cylinder Mustang … and at least close the gap between it and cars like the Corvette.

Because the rest of the car rocks.

The action of the six-speed manual is as mechanically gratifying as the action of a custom 1911 .45 with a 3 pound trigger. The throttle blipping/rev-matching downshifts will make you feel – and look – like a pro. The steering’s laser-sight accurate, the chassis willing, the grip threshold seemingly limitless. Opposite-locked, tail-out … it delivers.

It just needs more than equivalent of a .380 under its hood. 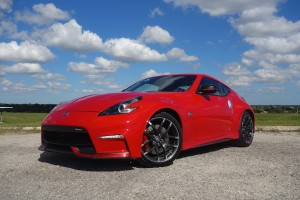 One very strong argument in the Z-car’s defense is that it’s a true sports car – not a GT (arguably, Corvette) or a muscle car (Mustang).

Even at its current too-high price point, it’s still a fairly unique car in this respect.

Dimensionally, it is much smaller than the Corvette: 167.5 inches long, 100.4 inch wheelbase vs. 176.9 and 106.7 for the Corvette. The more compact size of its V-6 (vs. V-8) engine allows a relatively short nose – and the wheel centerlines being more than six inches closer makes it look (and feel) much more compact than the Corvette – which is a pretty big car.

At least, for a (cough) sports car. 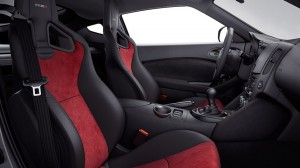 The Z’s proportions are much close to those of the Sciobaru twins – which are166.7 inches long overall and ride on a 101.2 inch wheelbase. But the Z has about an inch more headroom (38.2 inches vs. 37.1) and though it doesn’t seem like much of a difference, for taller drivers, an inch (plus or minus) can be a deal-breaker … or a deal-maker.

Naturally, the trunk is tiny – 6.9 cubic feet. But the liftback layout makes it feasible to carry unwieldy objects – for example, a pair of crutches (my wife was on ’em during the week I had the Z). Also, Nissan includes storage bins and cubbies sprinkled here and there, including behind the front seats – and while they may not have much room individually, collectively (if you’re creative) you can pack a Z with more stuff than you’d expect. For example, several cups of coffee – a feat made doable by the large, molded-out lowers built into each door panel. 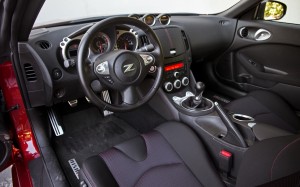 The vibe of the interior is Batman-esque. Dark Knight serious. Matte black and nickel finishes. All-analog primary gauges dominated by a centrally mounted tach with the speedo off to its right. On the dashtop and canted toward the driver are three secondary gauges, including oil temperature (but oddly, not pressure). Though severe, it’s not austere. It’s a proper office for the kind of work one does in a car such as this. Secondary controls (AC, heat, fan speed, stereo) are hand-operable without looking at them. Just as important, nothing looks cheap (an issue in the FR-S and BRZ).

You do get what you pay for, ultimately.

Nismo trims get a set of super nice (and super supportive) suede-trimmed Recaro sport buckets and matching suede-trimmed steering wheel – as well as wild-looking  body kit (different from and rear fascias, with a deep chin spoiler and air diffusers) plus a different – and ironically, more subtle – decklid spoiler.

If you want something in the middle – more performance than the base car but not quite as expensive as the Nismo – go with the Sport package. It adds the upgraded brakes (with large, powder-coated calipers), ultra-light 19-inch wheels and “summer” high-performance tires; a limited slip differential and a deeper chin spoiler. Remember: It’ll still be about as quick as the more expensive Nismo version. 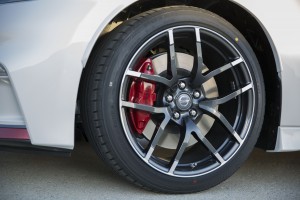 And, of course, you can go soft-top – something the BRZ and FR-S don’t (yet) offer and may never offer.

Forward visibility is good, but the view to the sides and rear is what you’d expect given the squeezed-back side glass and steeply sloped back glass.

Some reviewers claim the engine sounds ugly. I disagree with that assessment, but it’s a subjective. Take a listen for yourself and see what you think.

It’s another measure of what happens when you leave a car to sit for a few years in this market.

This car needs to go on a diet – and not just MSRP-wise.

If NIssan could figure out a way to shed 300 pounds off the thing, there’d be no need to amp up the output of the V-6. Things would balance. 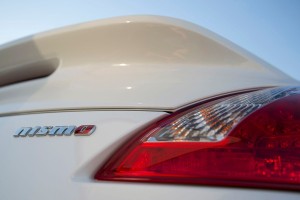 One other area where the Z is behind the times – thank god, this time – is seatbelt buzzer-wise.

You can get in and drive down to the mailbox – or cross-country, if you like – without “buckling up for safety.”  That is, you can do it without being electronically hectored by obnoxious buzzers that won’t turn off unless you do “buckle up for safety.”

Similarly, the other safety features are much less intrusive than has become typical. The traction/stability control can be turned off  – all the way off – at any time, by pushing a button. 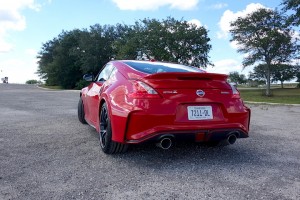 Nissan does not offer automatic braking, pedestrian or lane departure warning. It’s up to you to pay attention to what’s going on. And up to you to drive the damned thing.

None of the Z car’s flaws are individually serious – much less unfixable. But something’s got to be done – soon – if the current Z car is to avoid the fate of the previous Z car.