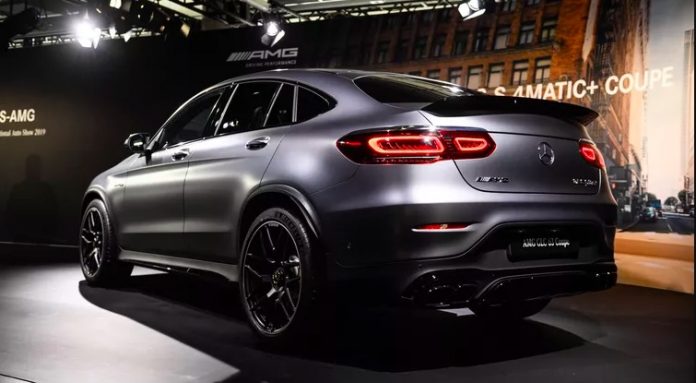 Style usually comes at the expense of practicality.

Two-door coupes, for instance. They look great but have back seats that are hard to get into  . . . and out of. Especially if the driver and front seat passenger haven’t gotten out first.

Then chop the roof – but without haircutting the headroom.

The GLC 300 Coupe – as Mercedes styles it – is a Mercedes GLC SUV with a lower/sleeker roofline, more head-turning quotient and almost an inch more ground clearance – with only slightly less head clearance.

A much higher price. 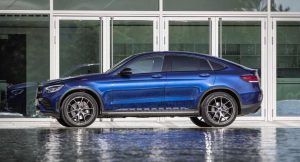 The GLC gets a few exterior styling teaks and some significant functional upgrades for the new model year, including more standard horsepower and slightly better gas mileage.

A larger 10-inch touch/swipe LCD screen for the secondary systems is now standard as well.

Also added to the enticements is the Mercedes Benz User Experience (MBUX) voice-control system. It premiered in top-of-the-line Benz Models like the S-Class sedan a couple of years ago. You can use it to have a conversation with your GLC – almost like Captain Kirk did in Star Trek. 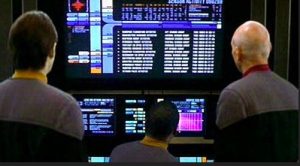 The difference is the MBUX system isn’t science fiction – and does more than just look stuff up. You can tell your GLC to change the radio station, make a phone call, turn up the AC  or find the closest Chinese restaurant.

It does almost everything except make you General Tso’s chicken.

An interesting – and almost as practical – alternative to just another high-end SUV.

A more practical SUV – in at least one way.

Modest tow rating (3,500 lbs.) even with the optional six and eight cylinder engines.

Tunnel vision to the rear. 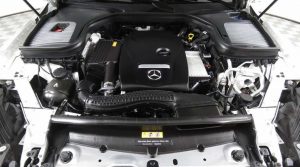 The GLC’s standard engine is still a 2.0 liter turbocharged four cylinder engine, but it’s now a more powerful 2.0 liter engine. Output increases to 255 horsepower vs. 241 last year – sufficient to get the 4,028 lb. Mercedes to 60 in 6.2 seconds.

Usually, when power (and performance) goes up, gas mileage goes down. In this case, it goes up slightly – to 21 city, 28 highway vs. 21 city, 27 highway last year. It’s probably not a noticeable difference in real-world driving.

But the additional 14 horsepower is. 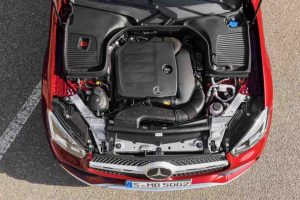 A nine-speed automatic with driver-selectable programs (and steering wheel-mounted paddle shifters, for manual gear-change control) is standard, as is Mercedes 4-Matic all-wheel-drive system. The regular GLC comes standard with rear-drive; AWD is optional – which partially accounts for the regular GLC’s much lower-to-start MSRP ($42,500).

Also standard in the Coupe – about an inch more ground clearance. It sits 5.9 inches off the ground vs. 5 inches for the not-as-swoopy  – and taller overall – regular GLC 300. This gives it a more aggressive appearance as well as more aggressive capability. 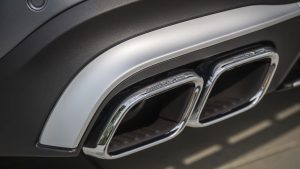 If the four isn’t enough, a 385 horsepower (and 384 ft.-lbs. of torque) turbocharged 3.0 liter V6 is also available. This takes about a second off the GLC’s 0-60 time but doesn’t increase the GLC’s towing capacity, which remains the same at just 3,500 lbs. The same remains the case if you buy the ultra-high-performance AMG version of the Coupe, which comes with turbocharged 4.0 liter V8 and 469-503 hp (depending on the tune) but still isn’t rated to pull more than 3,500 lbs. – more on that below.

However, it’ll pull you and everyone inside to 60 in 3.8 seconds. 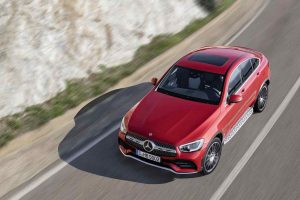 This “Coupe” drives like the luxury-sport sedan it practically is  . . . just higher up.

The combination of its lower roofline – 63.9 inches vs. 65.5 for the regular GLC –  and its  higher ground clearance – is an interesting stylistic and functional juxtaposition. It looks radical, but it’s actually more practical. Being higher up vs. the pavement is an advantage when there’s snow on the pavement.

And being lower down overall is an aerodynamic and stability advantage at high speed.

It’s also a potential advantage if you do decide to go off-road because you’re less likely to scrape the roof – and that beautiful paint – on low-hanging tree branches. But unlike so many crossover SUV that are really jacked-up front-wheel-drive cars, the Benz is a real SUV, built on a more rugged rear-drive-based platform that’ll surprise you with where you can take it – and make it back from – provided you don’t mind risking those low-hanging branches. 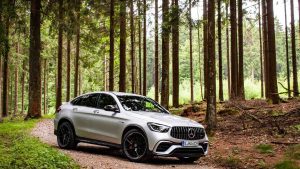 I drove the test Benz out into my field, a place that’s what the Moon is to an astronaut without a space suit to most crossovers. Not just because there’s no pavement – but because it’s not flat. The “field” is actually rolling hills and negotiating these takes more than just 4WD (or AWD). It takes articulation and clearance. The GLC has both and – with the right tires – this thing can do things most crossovers had better not try.

All the GLC’s engines are very torquey engines, because they are all turbocharged engines. Even the four generates the torque of a six (273 ft.-lbs.) and at a very ready-to-roll 1,800 RPM, which gives it the character of a six. You’d never know it wasn’t, except for the sound – which isn’t a bad sound. But it’s not as nice a sound as that made by the six – which you can have just by ticking the appropriate options box. 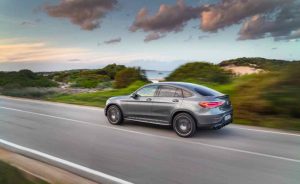 Of course, the V8 makes the best sound – as well as some other things.

The GLC’s one functional deficit is its not-so-much towing ability of only 3,500 lbs. max – regardless of engine – which is in the same territory as some cars and much less than some SUVs in the same general size class are capable of. But the rated capacity may be not the same as the actual capacity. Sometimes, a manufacturer will post a very conservative  rating, for reasons known only to the emperor. Or perhaps because there is a weak link in the chain, such as  a transmission (or frame) or some other thing that might not handle the load and could cause problems – but may not.

This is a fairly common thing, by the way. But, be careful – and thoughtful – before you hang anything heavier than 3,500 lbs. off the Benz’s bumper, no matter what’s under the hood – if only for warranty coverage considerations.

A low roofline often means much reduced headroom – but that’s not the case here. Not by much, anyhow. 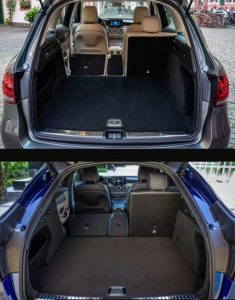 There’s also much room for cargo than in a Camry or any other mid-sized sedan and nearly as much room as in the regular, less -interesting-to-view GLC: 17.7 cubic feet behind the Coupe’s second row and 49.4 cubic feet with the second row folded flat vs. 19.4 and 56.5 (respectively) in the regular GLC.

One not-so-roomy place is the hump row for the middle passenger in the back seat. Remember that this is a real SUV – despite it being a “Coupe” – and so it has a driveshaft tunnel that makes a hump in the floor which makes it awkward to sit in the middle of the second row, which is really for two people rather than three. 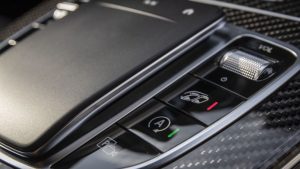 Though it has all the latest electronic controls – including the MBUX voice-activated controls – you can still control many of the GLC’s systems via simple, tactile mechanical controls such as the thumb wheel for the audio system’s volume on the center console (there’s a redundant second thumbwheel on the steering wheel, too).

The flat panel LCD dash display is actually two LCD dash displays that are blended together to look like a single-piece display. It is literally Star Trek for real. In the show, the actors pretended to engage the warp drive or fire the photon torpedoes. In the Benz, your touch actually activates functions – and so does your voice. 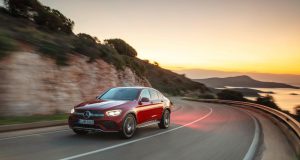 All trims can also be voice-activated through Siri/Google Assistant, too.

The Coupe’s main detractions are its much higher price – and its more limited rearward visibility.

The sleek roofline looks great but makes it harder to look.

This is counteracted to a great extent by an excellent surround-view camera system,  highly adjustable side mirrors and a back-up buzzer that will buzz if you’re about to back up into something. 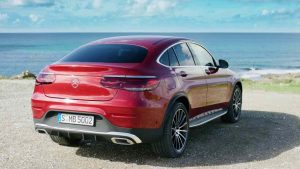 Another neat thing that’s available is matte-finish (not shiny) paint. A not-shiny Mercedes sounds like a cat that doesn’t have sleek fur, but it’s actually just the right coating for this thing because it’s different than almost everything.

It’s probably less radar reflective – which means it’s stealthy, too. That’s not a small thing given what the GLC can do, especially the six and eight cylinder versions.

Style may cost you more – in terms of dollars. But there’s less to pay otherwise than you might expect.