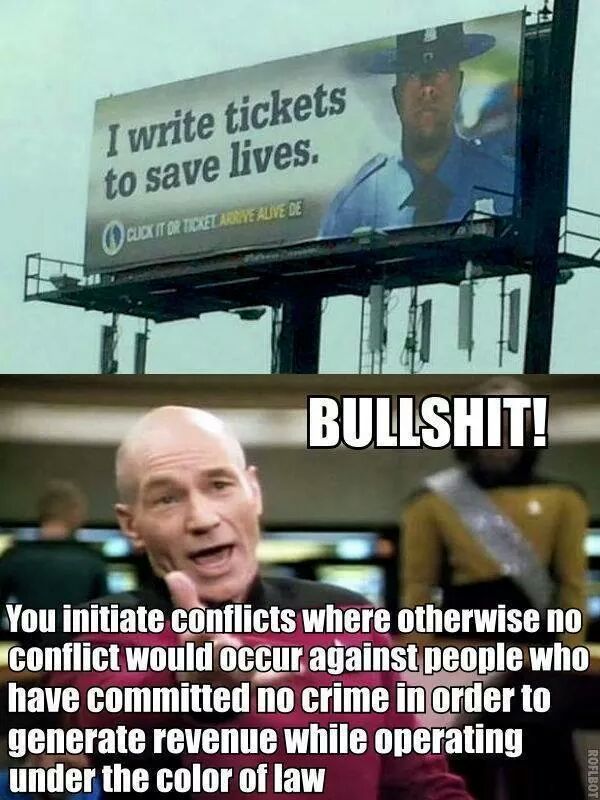 There are fast drivers and there are sloppy, incompetent drivers. 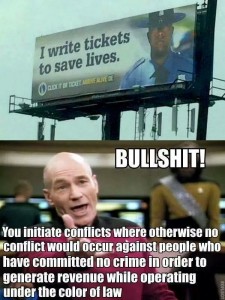 They are not necessarily the same drivers.

This is a distinction I have been trying to make for years in my writing about the “speed” issue. It’s one of the least understood, most demagogued issues I know of. And it has caused generations of pointless (or at least, unjustified) harassment and screwed millions out of probably billions of dollars in exactly the same way and for the same ultimate purpose as street muggings. The only difference is we’re taught – conditioned – to accept the latter form of strong-arm robbery as somehow acceptable because it’s done under color of “law” and by an anointed class of robbers who speak a certain lingo and make it all seem legit.

Anytime you’re interfered with by a man with a gun who at least implicitly threatens to use it on you if you decline his advances – you having done no harm to anyone or anything – it’s not legit.

And you’re the victim.

Speed is a variable, like pretty much anything in this world that involves people. 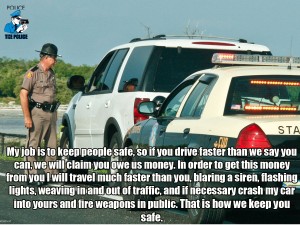 We do not (uh, well, we used to not) limit the smart kids because the not-as-smart kids couldn’t keep up. We (used to) have different “tracks” for both. The important point being it wasn’t practice to hold back the bright kids for the sake of the not-bright ones. We let the bright kids advance according to their abilities.

Und so weiter, as the saying goes in German.

Yet, the principle is not applied in another area of life where it is obvious – a self-evident truth – that people vary.

Is it not a maxim – a mathematical truth, almost – that some people are better drivers than others? What does this imply?

Is it reasonable to take the view that a skilled, attentive driver may be able to operate at much higher speed with less likelihood of losing control than an average or low-skilled driver operating at lower speed?

It is as obvious as noting the fact that Ronda Rousey stands a better chance of making it from one end of a dark alley in a bad neighborhood to the other end of the alley than you or I probably do. 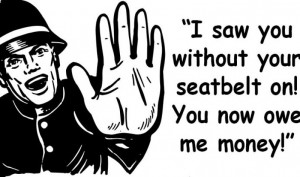 The problem – the unacknowledged fact of life –  is that we each have varying skill levels and the law does not take this into account. Someone who does not feel comfortable with “x” speed will usually regard another person who is comfortable at “x” speed as operating “unsafely” – even if that person is in full control of their vehicle and has not caused any problems for anyone. This is why the disagreement about speed limits – an inherently subjective and arbitrary construct. It is why we have “one-size-fits” all speed limits that reflect the capacities of the low-average driver (and therefore punish the skilled, above-average driver for no good reason).

Rather than subject everyone to a dumbed-down average or laws that are premised on everyone being inept (for example, no right on red laws) why not make the standard, use your judgment – with the understanding that you (as an individual) will be held fully accountable if your judgment is poor?

In other words, stop hassling people for “speeding” and other manufactured offenses that have no victim (except the person being stopped by the cop) and instead, hold people accountable if they cause harm? Meaning, if I lose control and hit your car, then I (and no one else) am responsible for restitution, for paying the cost of repairing or replacing your vehicle, covering your medical expenses, etc. 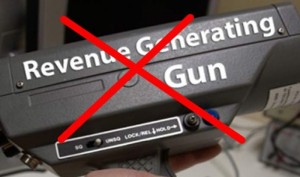 But otherwise, leave me (and others) be. No more punishing people for things that haven’t actually happened but which someone else feels “might.”

It’s a challenging notion, I realize. It gives many people – habituated as they are to collective punishment – the willies. They fear Ragnarok on the roads. It’s a silly fear. Based on the idea that basically everyone is not just nuts but barely contained homicidal and maniacal. Most people are neither. And those few who are will not be deterred by laws that tell them not to be. Cue “drug free” school zones where everything from joints to high-grade meth are readily available to any seventh grader with $10 and “gun free” cities where you are orders of magnitude more likely to be shot to death than in places where ordinary folks are trusted to handle guns responsibly and almost always do. 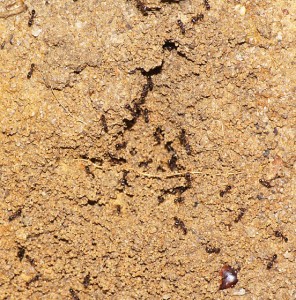 The writer William Burroughs once quipped that the first thing they do after a shooting is try to take the guns away from the people who didn’t do it.

It’s the same with “speeding.” Some idiot loses control of his car and rather than hold the idiot accountable, everyone else is punished for not having lost control of their car.

Ants are pretty much all the same, so one size does fit all. The ants are probably ok with this order of things. It is natural to them. But we’re people and we vary. Some of us are better at some things than others are – and it’s madness and meanness to punish people for being better on the premise that others aren’t.

The question is whether we’re going to accept being punished for not shooting people on account of the fact that “someone” might… and whether that same ridiculous notion will continue to be applied to driving.