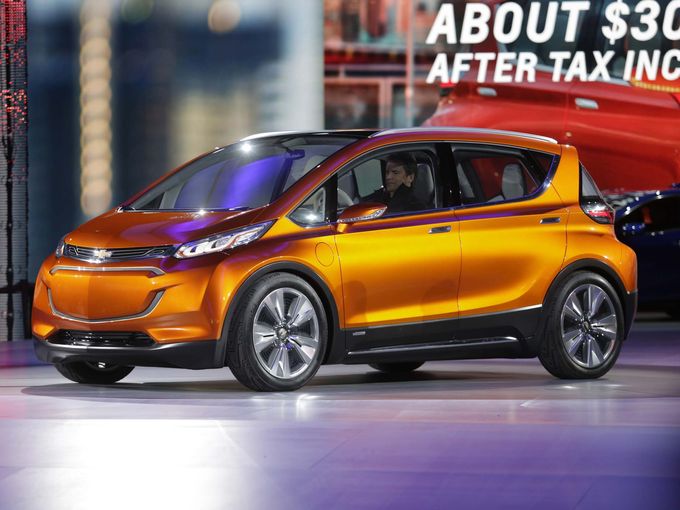 Why does GM continue to throw money at electric cars? 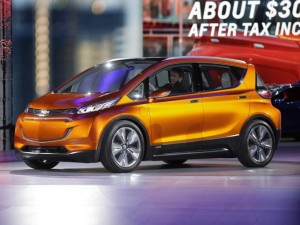 Perhaps because it’s not their money.

It’s yours. And mine.

In the form of apparently endless taxpayer-extorted “help” (via federal taxation) to spur the design and manufacture of vehicles that have to be given away at a loss because – channeling Donald Trump – they are losers.

First the Volt – so few of which were offloaded (“sold” would be an affront to honest English) GM had to idle the plant devoted to their assembly. Then GM doubled-down and ginned up the ELR – a Volt dressed in Cadillac duds that was the ultimate dud. So few of them were offloaded (no surprise, given each one cost twice what a Volt listed for) it made the Volt seem like a bases-loaded homer.

Another $30,000 (that’s after the $7,500 federal direct-to-the”buyer” bribe) automotive Turducken that’s inferior in every way function can be measured to a 1984 Yugo. 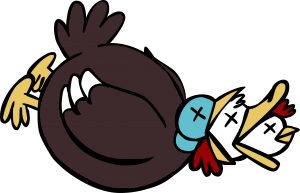 The government didn’t have to bribe anyone to buy a Yugo. Punchlines aside, people freely exchanged their money (not other people’s money) for them.

It could be refueled in less than five minutes. Using the heater or the headlights did not gimp the range.

Its battery pack weighs 960 pounds – more than half what the entire Yugo weighed (with a full tank of gas). GM spokesmen beam that you can put 50 miles of range into those batteries after only 30 minutes of waiting.

A full charge is possible after a mere nine hours. 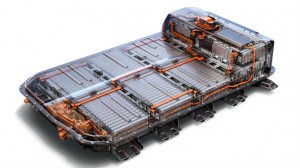 The car itself, a subcompact, weighs 3,580 pounds – twice (and then some) what a Yugo weighed and about as much as a current mid-sized IC car such as a Honda Accord or Toyota Camry weighs.

It probably goes faster than a Yugo – which had a top speed of about 84 MPH. But – like all electric cars – not for very long.

The faster you go in an electric car, the less far you’ll go. Range declines as velocity increases. Few car journalists – whether out of ignorance, laziness or fear – ever disclose this inconvenient truth.

The Tesla, for instance, is cheered by Fanboys for its supercar acceleration. Which it has. For a moment. The Tesla is like a Corvette with a half-gallon of gas in the tank… which you have to refill using an eye dropper. Use its performance and it will not perform very long.

So, basically, you either drive it like a Yugo… or you don’t drive it very far.

Electric batteries deplete rapidly when load is applied. This includes more than just the load applied by your right foot, incidentally. In an electric car, everything that’s powered is powered by the battery pack. This means headlights, the heater and the AC; every accessory. And like the accelerator pedal, the more you use these accessories, the faster the battery depletes. 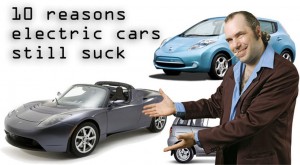 There is no energy input since you can’t keep the thing plugged in, so it only goes so far before the battery wilts – and then you’re out of luck until you find a place to plug in.

Which then takes a minimum of  30-60 minutes before you can get moving again – because of the nature of batteries, which can only accept so much charge in a given amount of time. Another inconvenient truth rarely mentioned by EV fanboys and the journalists “covering” EVs.

It’s idiocy that makes Forrest Gump look like a prodigy.

Which is why it requires government involvement.

And payola. Extorted from you and me and then handed over to car companies so they can make these electrified atrocities and give them away.

There is no way (cue Jackie Gleason voice) it would fly otherwise. Thirty grand for an ugsome little shitbox that doesn’t perform as well as a $15,000 Corolla and which (arguably) is inferior as a basic conveyance to a $3,600 Yugo? A few flippantly rich Hollywood celebrity types might buy one. Real people not so much. 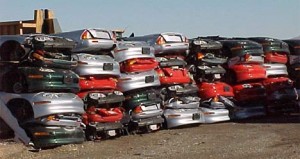 The Volt, at least, carried around a gas engine to recharge the battery pack while the car was moving (as opposed to stationary and tied via a power cord to an electrical outlet). That gave it real-car range, but its efficiency sucked. Once the battery was depleted and the thing had to rely on evil IC (internal combustion) for power, the mileage it delivered was about what you got with an ’84 Yugo. Except the Yugo didn’t cost $34,000 (the Volt’s base price).

Yeah. When those technologies cost vastly more than any putative fuel savings. It’s what they call a no-brainer.

Except when government is involved.