The window sticker says 25 city, 34 highway – but you find that you’re seeing much less than that.

Is it false advertising?

I’ll try to fix that.

The mileage touted on the window sticker is based on the mileage achieved during a test loop performed by the government (EPA), broken down in two categories – “city” and “highway” driving.

The problem with this is that it’s inherently imprecise. Every driver drives differently (e.g., accelerates more or less aggressively, drives faster – or slower, etc.). And of course, the roads you drive on – and the conditions you drive in (e.g., altitude, temperature) are inevitably going to be different than the test loop’s, too.

Hence the weasel words, “your mileage may vary.”

As an automotive journalist who test drives a new car each week, I have experienced some pretty spectacular differences between advertised and real-world fuel economy.

Of course, driving 130 MPH will do that.

But what about what you do?

Here are some factors affecting mileage – and why your real-world mileage will likely vary, too:

A gas-engined car is least-efficient (gets the poorest mileage) in low-speed, stop-and-go “city” driving. It takes a lot of energy (fuel) to get a vehicle moving from a dead stop – even if you accelerate gently.  It takes a fair amount of downward pressure on the pedal to get the car to get going; watch the tachometer, too. You will see the engine revs climb to 3,000 or more RPM (typically) as the car tries to build speed.

Think about how hard it to get a wheelbarrow full of bricks moving. Same principle.

This is why the “city” mileage figure is always lowest. 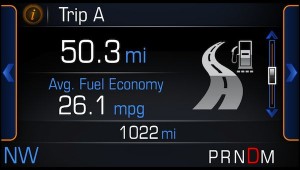 If most of your driving falls into this category, your average mileage – the figure that ultimately matters most – is going to trend closer to the city number, too.  The lower number always drags down the higher one.

Once moving, on the other hand, it does not take nearly as much energy (fuel) to maintain speed. Think about that wheelbarrow again. Once you get it rolling, it’s not as hard to keep it rolling. High school physics… remember?

Believe it or not, it only takes about as much horsepower as produced by a riding lawn mower to keep a typical family car trundling along at 45 MPH.  It hardly takes any pressure on the accelerate pedal (unless you encounter an uphill stretch) and if you look at your tachometer you will see that the engine is barely idling (typically, about 1,500 or so RPM) at that road speed, assuming the transmission is in top/overdrive gear.

This is why the “highway” number is usually higher.

Hybrid cars get their best mileage in city/stop-and-go driving. The hybrid Prius, for example, carries and EPA city rating of 54 MPG while the highway figure is 50 MPG. 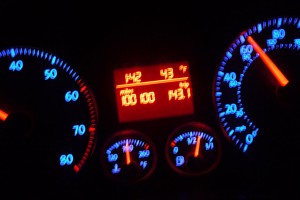 It’s because in stop-and-go driving, the hybrid operates in electric mode (batteries) most of the time, with the gas engine frequently not even running. It will kick on every once in a while to recharge the battery pack (which powers the electric motors) but for short hops you will effectively be driving an electric car. If you drive short distances and at low speeds (under 30 MPH) it is possible to beat the advertised city mileage.

Note that in many cities, taxis are using hybrids for exactly this reason.

That said, the highway mileage of the hybrids I’ve driven (all of them) is almost always significantly lower-than-advertised.

Because most hybrids (like the Prius) have smaller-than-usual (for the size/type of car) gas engines – to maximize fuel savings at low speeds. 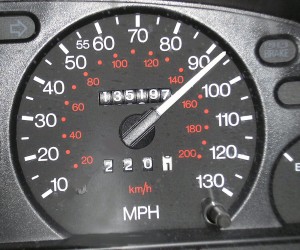 At today’s typical highway cruise speeds of 75-80-ish MPH the Prius – in my experience – averages low 40s, not much better than many non-hybrid economy cars.

The take away here is to take a test drive to see what kind of mileage the car you’re thinking about buying – whether a standard car or a hybrid car – will deliver based on how you (not the EPA) drive.

And don’t go by the in-car computer, either. These (trust me) are often less-than-accurate. Just like the EPA.

To know the real deal, do this:

Fill the car up, zero the odometer – and drive the car on a test loop of your own, one that replicates your style of driving and also the type of driving you do.

This will be your real-world mileage … with you behind the wheel.

As opposed to the EPA’s mileage estimate… with someone else behind the wheel.

How Will We Know?