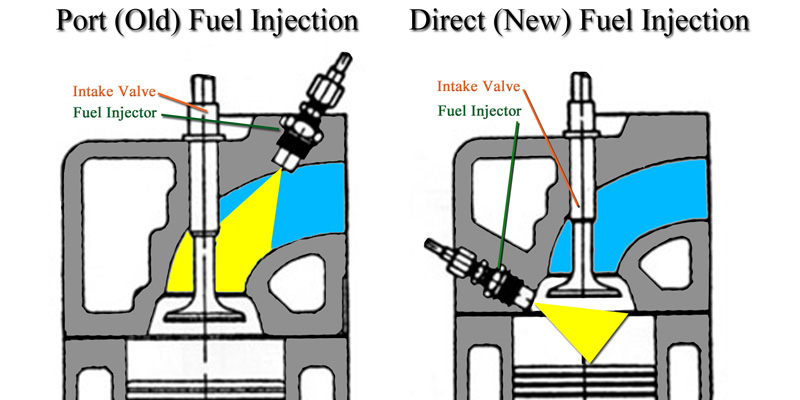 The Uncle-ized car (which is all new cars) has some “features” you may want to consider carefully before you buy in. Features that could hit you with cost – and hassles – once the warranty runs out. 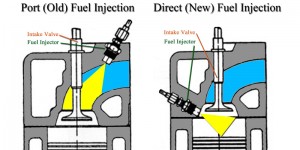 Let’s have a look at a few of these:

In order to achieve a fractional gain in miles-per-gallon (in order to avoid Uncle’s “gas guzzler” taxes) the entire industry (all brands, all models) has been switching over to direct gas injection (DI) in place of port fuel injection (PFI).

DI offers no obvious/quantifiable advantage to the car buyer over PFI but has several disadvantages – including a noisy engine. DI gas engines sound like diesel engines; they rattle at idle due to the very high (3-4,000 PSI) fuel system pressure. The car companies try to cover this up by fitting DI engines with acoustic covers, but the sound is still very noticeable, especially when you are standing outside the car.

But the DI sound is merely unpleasant. It’s the functional problems that are more worrisome.

There have been problems reported along these lines with several DI engines from different manufacturers. And fixing the problem – cleaning the crud – can mean physical disassembly of the engine  – removal of the cylinder head(s) – to get at the crudded up valves.

This will not be inexpensive.

Neither is the DI system itself.

The system uses two pumps, operates under very high pressure (several thousand pounds per square inch) and no one really knows whether it will be durable over the long haul and post-warranty because the technology has not been in widespread, real-world use long enough. If unforeseen problems crop up post-warranty, the bill could be steep.

And all on you. 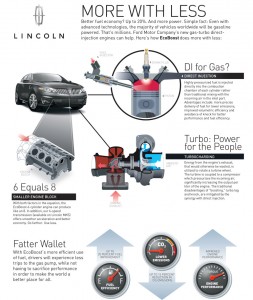 Turbos can make a small engine perform like a bigger engine – but when the driver eases off the accelerator the boost decreases and the engine uses less fuel.

Historically, turbochargers were used mostly if not entirely in performance car applications – sporty cars – but lately, they’re being fitted to ordinary A to B cars, such as mid-sized family sedans and even pick-up trucks (e.g., Ford F-150). This is being done to maintain acceptable levels of performance with smaller engines while also achieving an uptick in fuel economy over an otherwise comparably powerful (but not turbocharged) larger engine.

The downsides – actual and potential – as are follows:

Higher buy-in cost, because of the additional components (the turbocharger and related exhaust plumbing, etc.) and potentially higher down-the-road repair/replacements costs, in the event there is a problem with the turbo and its related components. Which may be more likely due to the high levels of boost (many new turbocharged cars run 21-plus pounds of boost) which places a lot of pressure – literally – on internal components as well as the fact of there being more components. 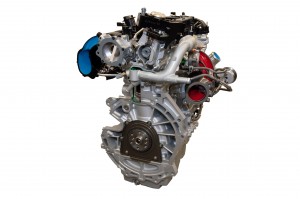 The car companies have made a number of improvements to the basic design of turbocharged engines to improve their longevity and durability (including specialized oiling systems and very heavy-duty components designed to to handle the pressure/load of turbocharging) but the fact remains there are additional parts and the more parts you’ve got, the more potential there is that something will fail. Turbos can be very expensive to replace – several thousand dollars each. And some vehicles have two of them.

An extended warranty might be well worth the cost, if you’re thinking about buying a new car with a turbocharged engine. And a very smart move, if the car you’re considering is used – and the factory powertrain warranty is either used up or close to being used up.

Almost all 2016 model year vehicles have at least six air bags. Many have seven or eight or more. That’s a lot of air bags.

Why worry about this? 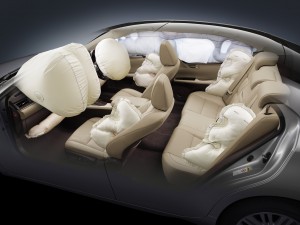 The chief one being the very real possibility that your car may be deemed a “total loss” after an otherwise fixable accident, due to the cost of replacing all those air bags on top of the damage done to the interior of the vehicle when they deployed.

This is already an issue with cars that have just two air bags – driver and front seat passenger – which all cars have had since the ‘90s. When the bags go off – which they are designed to do (typically) when a vehicle strikes another vehicle (or a fixed object, like a tree) at about 25 MPH or faster – they explode out of the steering wheel and dashboard. This makes a mess of the car’s interior.

In addition to the bags themselves (and the chemical charges that inflate them) the steering wheel and dashboard and may interior trim parts must also be replaced. This is why the cost of replacing just the two air bags (and related parts) typically costs $2,000 or more.

This is before adding the cost of repairing the car’s body damage. 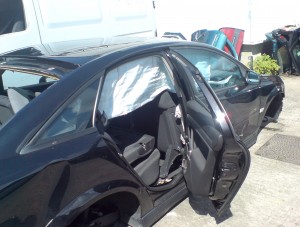 If the car itself is say ten or so years old only worth $10,000 or so (as an example) it is likely the cost of repairing the physical damage to the body and replacing the air bags (which is required by law, as these are part of the car’s federally required “safety” equipment) can exceed the 50 percent of retail market value threshold at which point the insurance company will often refuse to pay for the repairs. Instead, they will issue you a check for the “market value” of your vehicle – often less than its actual value, as well as its value to you – and “total” the car.

That is, send it to the crusher.

Air bags are thus a ticking time bomb in your car – literally as well as figuratively.

And now you’ve got six (or maybe eight) of them.

Almost all the new cars – even the lower-end ones – now come standard with or offer an LCD touchscreen. These iPad-like screens typically have menus that can be scrolled through and this makes it feasible to incorporate numerous controls and functions in a relatively small space, de-cluttering the dashboard. 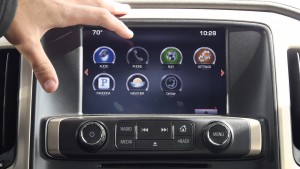 I test-drive brand new cars every week. These are not merely new cars, they are press cars – vehicles loaned to journalists for evaluation. Journalists who will write articles about them. One assumes these press cars are given a special going-over by the car companies to make sure there are no problems with them.

And yet, I’ve had several this year already that had hiccups.

If you think about it, the LCD screen is like an iPad. Except it’s an iPad that has to deal with being in a moving car and subjected to potholes and heat and cold, dust and moisture. 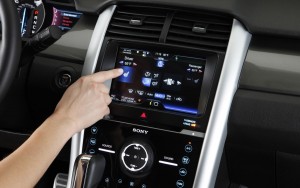 Also – gadgets get old fast. Imagine how obsolete your current phone will be in five years. The same will happen to the infotainment/apps/GPS in your next new car. Some of these can be updated (check for this). But the basic unit itself is what it is – a time capsule from the year you bought your car.

Word is that the car companies are looking into getting rid of fixed/in-car LCD screens in favor of slots or ports that you’d then simply pop your iPad or whatever up-to-date gadget into.

That would deal with the problem of keeping things current, technologically – and also make replacement of a croaked screen a lot easier, too.