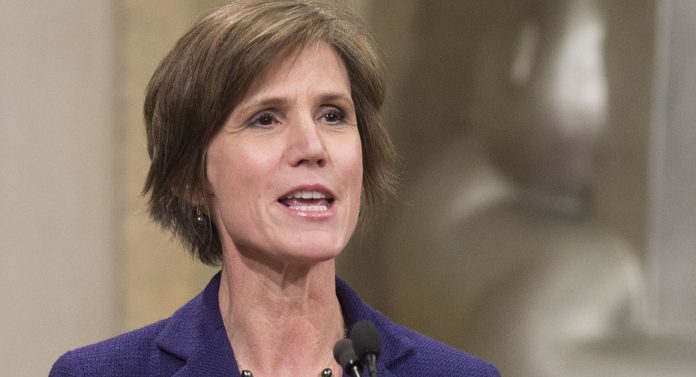 It’s interesting to note the correlation between dreary leftism and dreary looking people – like Yates.

Her pussy is in no danger of being grabbed.

And her firing makes it a little less likely that our wallets will be grabbed – to pay for the human tsunami of Syrian refugees Yates and others on the left wish to import but not pay for themselves.

I know a guy who posts oh-the-humanity! lectures on Facebook about “opening our doors” to these refugees. Yet he does not open his doors to them. They are not staying in his guest bedroom, watching TV on his sofa, a plate of his food on their laps.

It is easy to be charitable with other people’s money.

It’s what the left specializes in.

The false kindness of proxy violence.

Such people – who preen as moral lions – are physical cowards. They cannot face the violence that’s at the core of everything they demand and so have others exercise it on their behalf.

They are apoplectic now because their hoped-for queen termagant lost to (of all things) a man and one who seems to take the view that America’s pockets aren’t bottomless and that moderating who comes here is not unreasonable.

This unglues the left. Any suggestion of limits or restrictions when it comes to handing out other people’s property is taken as immediate, irrefutable evidence of racism. Which only makes the left even more rubber roomy than it has already shown itself to be. 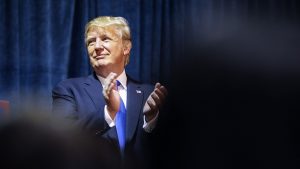 Most Americans do not hate refugees or minorities. They hate being fleeced to pay for them – and that is a very different thing.

The contretemps over immigration – from Syria and otherwise – would dissipate among the still-sane if it were only a question of immigration. If Jose (or his Syrian equivalent) wishes to come to America, great! We – most people – would not object.

It harms me not at all if a Syrian or Mexican family buys the house next door. This is not what is being objected to – notwithstanding that the left is attempting to paint any objections in exactly this color.

It just ain’t so.

Objection arises because of the costs imposed on local infrastructure, schools for instance. An influx of refugees or migrants means more kids in the school and who is going to pay for the additional teachers, lunches and so on that attend?

It’s a reasonable question, not motivated by “hate.”

Americans are taxed to death already and find they can barely afford “health care” for themselves and their families yet are lectured to by rich DC termagants such as Yates and my Facebook friend that they must accept more and higher taxes to pay for an unlimited tsunami of immigrants.

Have you ever heard or read any “immigration advocate” toss out a number or percent that’s enough? That’s at last, too many?

There has to be a number, though. Is it 1 billion? 500 million? America can’t house the world. Not physically, not economically. There are limits. Ask the people on Titanic. Only so many lifeboats; not everyone is going to make it. Sad – but life isn’t fair.

So, again, what is the number?

Yates and those in her camp will not say. They will only say that we must accept – and pay – without limit.

Meanwhile, we must accept all kinds of limits. Which of course, they never do.

They will continue to live behind well-guarded walls, drawing fat government paychecks.

And they wonder why Trump was elected.