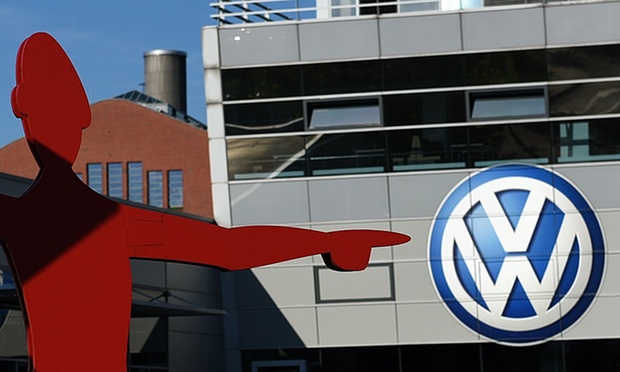 If you lived in the DC area during the ’80s, you will remember the Fall of the Greaseman.

Now living in obscurity – and, apparently, poverty – in a tiny West Virginia town, the Greaseman was one of the country’s best-known (and highest-paid) radio “shock jocks.” He ruled the morning drive at DC101 FM, at the time the most popular album rock radio station in the nation’s capital.

He was better-known than Howard Stern.

Today, he is unknown.

Because unlike Stern, the Grease . . . apologized.

He made a couple of obnoxious jokes – one about the Martin Luther King Day Holiday, the other about the musical talents of a rapper – which his audience loved but which also aroused the enmity of the professionally aggrieved, who even then were a force to be reckoned with. 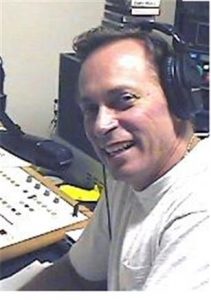 They demanded the Greaseman’s head – and he gave it to them.

Instead of continuing to do his thing – which his audience loved – and telling his critics to change the channel or something even less polite (as Howard Stern is famous for doing… and who is, as a result, still famous) the Grease bowed his head, did the perp shuffle with Al Sharpton and other professional grievance-mongers and, rather than forgiveness, received pain . . . followed by obscurity.

He lost his job, his fortune, everything.

VW could learn something – but clearly has not.

Last week, the genuflecting Germans announced a $2 billion “investment” (yes, they used that word) in “zero emissions vehicle awareness programs and infrastructure,” part of the company’s embarrassingly servile efforts to recover Good Standing with Uncle. Who remains much-annoyed with VW over the company’s dastardly “cheating” on EPA emissions tests. 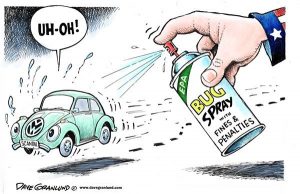 And who will never, ever forgive – or forget.

Meanwhile, VW’s customers will no longer get what they loved – affordable, high-mileage diesel-powered vehicles. They are gone like the Grease – and not because people didn’t love them.

Instead, the company will throw money at electric car “fast” chargers in urban areas –  which are “fast” like Forrest Gump wasn’t stupid. Maybe “fast” vs. how long it takes to charge up an electric car via a standard 115V household outlet (which is several hours at least). But still at least 30-45 minutes, or five times as long as it takes to gas up a not-electric car.

Further extortions – and that’s what all this amounts to – include four $500 million “investments” in “green” initiatives in California, such as a “zero emissions” shuttle bus/transit program and electric car ride-sharing. 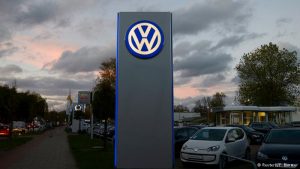 Does it work? Does it make sense? No one cares. So long as it is “green” any amount of green expended is never enough – much like apologizing for a “racially insensitive” remark.

VW has also committed to adding three new electric vehicles to its product portfolio – which it needs, in terms of making money, like JFK needed another head shot. It has promised to sell 5,000 of them annually by 2020.

It could not give away the one electric car it has in its lineup – the miserable electric Golf. A car that needed to be delivered on a flatbed to car journalists who lived more than 70 miles from the press pool – because the car couldn’t make it there on its own steam. Actually, steam power would work better. It doesn’t take hours or even 30 minutes to top off a steam-powered vehicle with water.

And they go fast and for a long time, too. 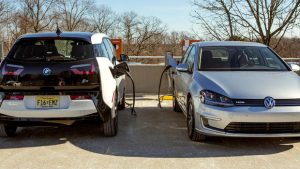 But VW is going to do what everyone else is doing- or trying to do: Build more too-expensive, economically untenable, functionally impaired cars that the market hasn’t got much use for but which the government is determined to force down everyone’s throats.

Only even more so, to make atonement for the sin of “cheating” Uncle for the sake of its customers.

VW has lost its nerve – and maybe its mind. 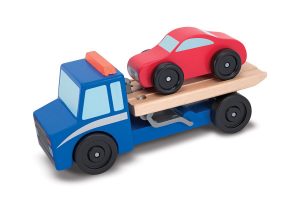 The New Economy isn’t about earning money by making things people want and selling it to them at a price they can afford and which makes an honest profit for the company. It is about “working with” the government, to force-feed people what government bureaucrats decree they may have.

Lately, at a loss.

The whole unspeakable mess will be subsumed under a new in-house Electrify America LLC – which will be based snuggle-close to Uncle in the DC suburb of Reston, Virginia.

Just as the Grease imagined that posing stoop-shouldered with Al and Jesse would stifle the calls for his head and make friends out of implacable enemies who would remain enemies no matter what he did, so VW deludedly thinks that embracing the electric car tar baby will get Uncle to soften and maybe even smile.

Why the Barbarians are at the Gates