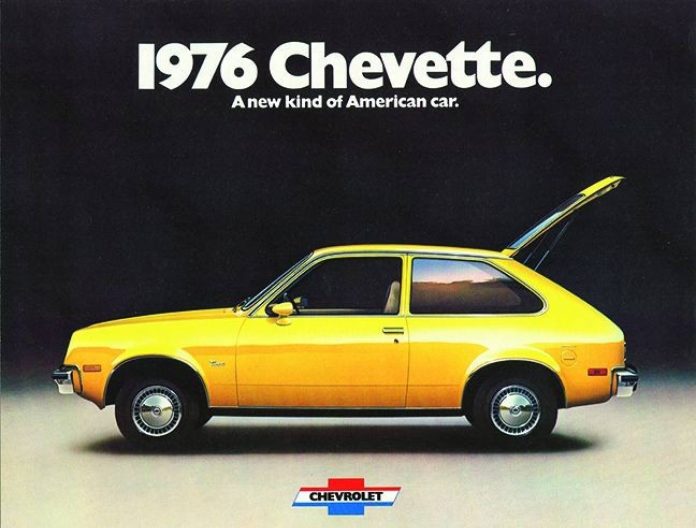 In some ways, the Chevy Chevette had a lot in common with a new Mercedes – or similar high-end luxury car.

It wasn’t, for openers, front-wheel-drive. Like the Benz, the ‘Vette was rear-wheel-drive.

Theoretically, it could do a burnout.

And if the road was wet, you could!

Or, if you put something else under the hood . . . 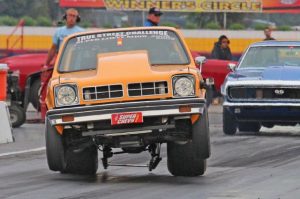 The Chevette was rear-drive because it was a first-generation econo-box, like the Vega (also RWD) that preceded it. So was the Ford Pinto and others of their ilk, such as the AMC Gremlin.

GM and the rest of the American car industry had not-much experience with the FWD configuration, which was at the time still a mostly Japanese specialty. But even the Japanese were still making RWD economy cars – like the Datsun B210, as a for-instance.

FWD transaxles (combining the transmission and drive axle assembly into a single unit, which bolted to the engine and the whole thing sitting on top of the front wheels) are just the ticket for stamping out lots of cars, really cheaply. The layout  eliminates parts like a separate rear axle and long driveshaft connecting it to the transmission.

But it’s hard to beat a cast iron rear axle for low cost and hard-to-hurt-it.

Weight balance is better, too. And, it is just the ticket for a proper burnout.

The rear-drive (and front-engine) layout thus presented an opportunity for hot rodders. Just as the Vega that preceded it had. 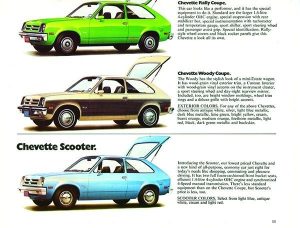 The results were – and still are – amusing.

But of course, amusing wasn’t the Chevette’s Main Mission. Its mission was miles-per-gallon.

Chevy’s other ‘Vette was conceived not so much by the gas crisis of 1973 – though that contrived event served as midwife – but rather by the federal government’s imposition of Corporate Average Fuel Efficiency (CAFE) requirements. 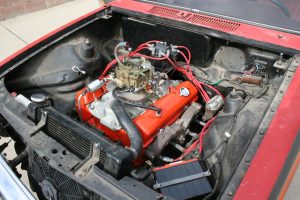 CAFE set a mandatory fleet average fuel economy number that each automaker had to meet or else get hit with “gas guzzler” fines, these being passed on to buyers in the form of higher prices. The government apparently believing that people queuing up in gas lines needed to be forced to buy more efficient cars.

CAFE was a particular burden on American car companies – because almost all of their cars (at the time) were “gas guzzlers.” GM – and Ford and Chrysler – had to re-engineer almost their entire model lineup overnight. And prematurely retire cars (and engines) that they had invested huge sums developing but which were no longer politically correct. 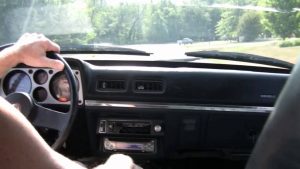 The Japanese, meanwhile, built nothing but gas-sippers. Whether on purpose or not, CAFE gave them an instant – and artificial – competitive advantage via regulatory fatwa.

So, the Chevette was a crash program – an all new platform (the T body) designed and made manufacturing reality in less than two years.

The first production models  – all of them two-door hatchbacks, your choice of entry-level Scooter, sporty Rally coupe or Woodie coupe, with fake laminated metal “wood” paneling along the sides – became available in the fall of 1975 as ’76 models, just in time for the country’s Bicentennial celebrations and the official enactment of the CAFE regs.

It was also a crash diet. The ’76 Chevette weighed about half as much as a typical American car of the period – just 1,843 lbs. for the base coupe with a manual (four speed) transmission. Even the engine – made of cast iron – was light. Lighter by almost 50 pounds than the Chevy Vega’s aluminum engine – and without the latter’s tendency to melt.

Under the Scooter’s hood, a 1.4 liter four that produced a maximum rated output of 52 horsepower – about as much as a 500 CC motorcycle engine. This gave a top speed approaching 89 MPH and a 0-60 capability of about 18 seconds. 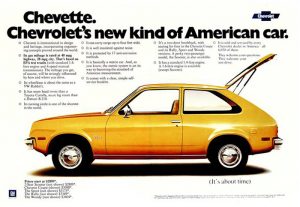 You could upgrade – in the Rally – to a mighty 60 hp, 1.6 liter four. This knocked the zero time down to just under 18 seconds and pushed the top speed to just over 90 MPH, all out.

The Chevette was capable of a spectacular-for-the-Seventies 40 MPG on the highway – without an overdrive transmission or electronic fuel injection. Only a handful of current-year (2017) economy cars use less fuel – and they all have the advantages of overdrive gearing and the precise metering of electronic fuel injection. The reason they don’t do better, MPG-wise, is because they are all much heavier – by 500-700 pounds. They have to be, in order to be compliant with the federal safety fatwas that went into effect since the Chevette’s introduction.

Luckily for GM, the government was only mandating MPGs back in the mid-1970s.

The original three-door hatchback was tiny on the outside: 158.7inches long – about six feet shorter than a Buick Electra 225 sedan. You could almost fit the ‘Vette int he trunk of the Buick.

That is a small car. 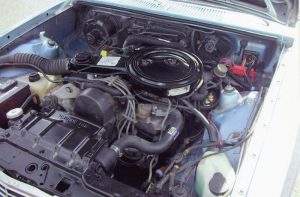 The ‘Vette’s backseats, though, were not the place to be – unless you were cargo. Just 28.7 inches of legroom (the Accent’s back seats have 33.3 inches).

Oh, and that assumes you had back seats. They were an extra-cost option in the Scooter.

But it was also really nimble – a good thing, given how often it was called to get out of the way of speedier cars.

At its 1975 press introduction, Chevy boasted about the car’s tight (30.2 foot) turning circle – which is tight, even by the standards of 40 years later. The 2017 Accent’s turning circle is 34.1 feet – almost four feet wider. 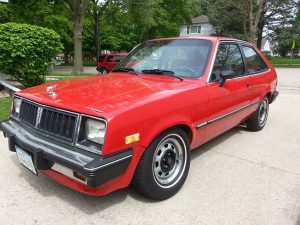 The Chevette was also cheap. The advertised base price of a ’76 Scooter was $2,899 – vs. $14,995 for a new Hyundai Accent. Of course, the Hyundai comes standard with air conditioning (the ‘Vette came with pop open rear vent windows) a six-speed manual transmission and a six-speaker AM/FM/satellite radio/Bluetooth-enabled stereo (the ‘Vette came with an AM radio and a speaker) plus rear seats are included.

If you upgraded to the Rally, you got arm rests in place of pull straps, the larger 1.6 liter engine, exterior graphics and a rear swaybar. 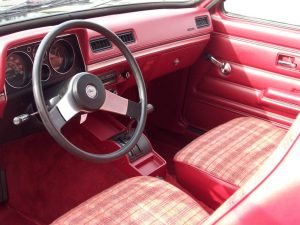 to prompt Chevy to expand the range in ’78 by offering a four door model that was a couple of inches longer overall and had a more passenger-friendly back seat. This was also the first year for the HO (High Output) Chevette, which got an uprated version of the 1.6 liter four, now making 63 hp – which pushed the car’s top speed to 94 MPH and got you into the fifteens, zero to 60. More important, there was just enough power now to run an AC compressor – and that became an option for the first time. You could get power brakes and an AM/FM radio (still single speaker), too.

People laugh today, but Chevy was laughing all the way to the bank. By late 1979 – about three years into the Chevette’s production run – almost half a million had been sold. 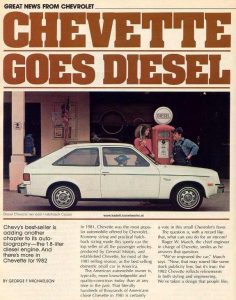 GM continued to tweak and improve the car as the years rolled by. In 1981, an Isuzu-sourced 1.8 liter diesel engine became available. It didn’t have enough power to to turn an AC compressor – so you had to do without if you wanted the near-60 MPG this car was capable of. That’s better than any current car – including hybrid cars. But plan ahead when accelerating – if that’s the right word. As languid as the gas-engined Chevettes were, the diesel variants were paralytic, needing at least 20 and as many as 30 seconds before achieving 60 MPH.

Which was not far off the car’s top speed of around 75 MPH.

People loved the ‘Vette nonetheless. So much so that GM decided to sell a badge-engineered version under the Pontiac label – the T1000. This car was also sold in Canada as the Acadian.

Sales continued strong until the mid-1980s, by which time the now-almost-ten-year-old platform was looking and feeling its age. A new crop of FWD economy cars – in particular, Chrysler’s K-cars – offered things the ‘Vette could not, such as a flat interior floor pan which allowed three across/six-passenger seating in a car not much bigger, overall, than the Chevette.

But you couldn’t do a burnout in a K-car.

Much less put a V8 in the thing.

At least, not easily.

They truly don’t build ‘em like they used to… .

Why Muscle Cars – The Original Ones – Still Rule