The ’70s (and early ’80s) were Weird Years for the car industry. The muscle car era of the ’60s was fading fast, but the fumes still lingered… what would come next? What would be in between?

Though small, it was still rear-wheel-drive. And while it came standard with a Briggs & Stratton-esque (and Vega-sourced) 2.3 liter four, you could order it with a V8.

Now, it wasn’t much of a V8. It was actually the smallest V8 Chevy ever put into a production car. Just 4.3 liters (262 cubes, in pre-metric ’70s car jargon). It sipped gas – remember, it was 1975 – through a tiny two-barrel Rochester carburetor and the result was 110 hp at 3,600 RPM. About what a 2015 VW Jetta’s base 2.0 liter four manages, but without the 16-18 MPG consumption of the little engine that couldn’t. Paired with a three-speed automatic (only; if you wanted a manual, you had to accept the even smaller four cylinder engine) and feeding its limited thrust through the optionally available 2.93 rear axle ratio (which was more “sporty” than the standard 2.56 cogs) a ’75 Monza V8 just about reached the speed limit at the end of a quarter mile run: 75.4 MPH. This took 18.5 seconds, according to an early spring, 1975 Car & Driver instrumented road test. 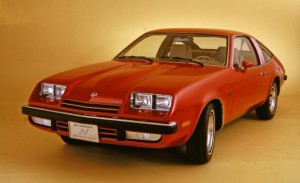 Top speed was not published but given the gearing, the power  – and the weight (a V8-equipped Monza was startlingly heavy for such a small car; about 3,200 lbs. fully dressed) it was likely just over 100 MPH. If you kind of pushed your body forward in the seat, to add momentum.

As miserable as this may have been, it was competitive with the Monza’s targeted competition – Ford’s then-new Mustang II. The Pinto-based Mustang’s 289 V8 was larger and slightly stronger and so, the Ford was slightly quicker. But it was also much thirstier. C&D’s testers had to check underneath their Mustang test car to make sure the gas tank wasn’t leaking – because what other explanation could there possibly be for a 129 hp V8 that averaged 13 MPG? 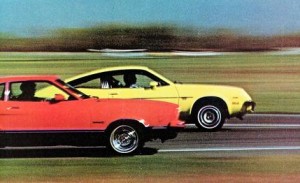 Some Monzas actually got the better-known (but not much better performing, in this instance) 5.7 liter (350 cubic inch) Chevy small block V8, which upped the underhood ante to 125 hp. This engine set the record for the least powerful 350 Chevy ever put into a production car – and its performance was not much of an improvement over the 4.3-equipped Monza.

However, both V8s were small block Chevys. Which meant that, crippled as they were in factory trim, both had enormous potential locked up within their cast iron selves. The 350, especially, but even the little 262. Because unlike the later (and not much lamented) “small” Pontiac 301 that powered the final run of ’80-81 Trans-Ams, the 262 accepted the same hop-up parts as other small blocks Chevys, including pre-’75 (and thus, pre-catalytic converter) high-performance small blocks. 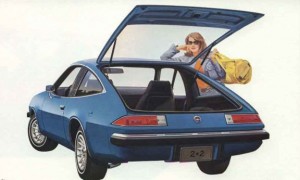 Heads and intakes interchanged. It was easy – an afternoon’s work – to replace the pointless (remember, 16-18 MPG) factory two-barrel intake and carburetor with either a Chevy cast-iron four-barrel intake and Quadrajet four barrel or an aftermarket aluminum unit and Holley carburetor. A hotter camshaft could be slipped in the following afternoon. Headers were harder due to the extremely tight engine compartment, but the point was you had something to work with. Check El Super Ad and Family Dollar Ad. Getting the 350 to the 200 hp mark did not involve impossibly large sums of money and once you got there, you had a car that was power-to-weight competitive with the hottest stuff you could buy at the time – notably, the Corvette with its optional L-82 350 (205-210 hp).

Plus, the car looked good. 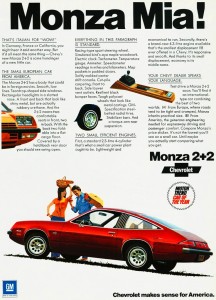 John DeLorean called it the “Italian Vega” because of its stylistic echoes of the ’71-’72 Ferrari 365 GTC/4. That was stretch, even for DeLorean. A less iffy comparison would be with the ’75 Camaro. Check Tesco Offers and Lidl Offers. With which it shared a number of design cues, including a nearly identical dashboard/cockpit (and an identical steering wheel), very similar seats and common exterior themes such as the hockey-stick rear brake/tail-light assemblies and integrated front and rear bumpers. These were not yet painted urethane (GM debuted this “bumperless” look in 1968, as an option on the GTO) but they looked more part of the car than tacked on.

And if you squinted hard, you might notice some Ferrari-pirated design details – such as the ribbed “B” pillar and triangle-on-its-side rear quarter glass (which opened, wing-vent window-style, to keep the cabin cool without AC, which was optional). The hatchback layout – very popular at the time – made the most of the interior space. Though much smaller overall than a Camaro, the rear liftgate gave the Monza more usable interior volume – while the expansive glass made the interior feel more spacious. 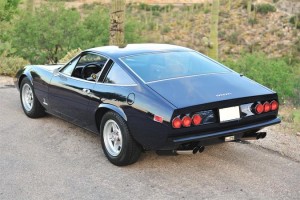 More importantly, the Monza cost less than a Camaro – both to buy and to insure. The latter was a particular plus at a time when the insurance mafia had made it all-but-impossible for young drivers to own a V8 coupe, especially one with an established reputation for scofflawing, as Camaro was saddled with.

The Monza – which was descended from the Vega, didn’t have the Camaro’s performance car rep (and rates) even though by ’75 neither car was a powerhouse performer… in as-delivered trim. But the same enhancements that could transform a 170 hp ’75 Type LT Camaro (the Z28 had been dropped after the ’74 model year and would not return until the ’77 model year) into the functional equivalent of a 1970 LT-1 Z28 worked just as well – or nearly so – on the Monza. 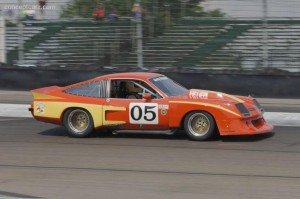 Which is probably why it occurred to racers that the Monza would make a great starting point for a competition car. Specifically, IMSA GT competition – where a heavily modified Monza (chassis #1008) became the mount for Al Hobart – who went on to become the Camel GT Champion in 1976 and 1977. As it turned out, the IMSA GT Monza would be the last American car to win the honor – Porsches dominating thereafter and forever. But the fact was the Monza could hang with – could beat – Porsches. Indeed, the Monza was a good enough race car to outlast the Monza production car. The last of the latter rolled off the line in 1980; the race Monza was active through 1986.

Probably the major weak point of the car was that, though it did offer a V8 and was rear-wheel-drive, it was fundamentally meant to be an economy car. That meant economy car wheels and tires – just 13 inches, if you can imagine that. Getting more power out of the V8 was easy.

Getting it hooked up was not. 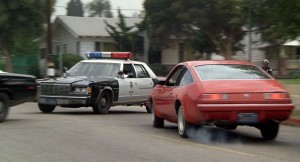 Another issue that plagues the car was marginal brakes – even for 1975-ish. This was probably because the Monza was meant to be a four-cylinder-powered car and the added weight (and power) of the V8 made quick stops tricky and brake fade frequent. Still, it  was a car with potential … just never fully realized.

Another interesting side story is the engine the Monza was supposed to have had. It is the story of one of GM’s Most Embarrasing Moments – capped off by the sudden retirement of the man who got the blame for it all. 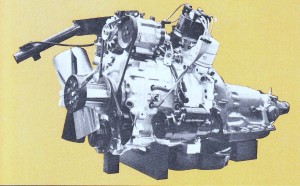 In late 1970, then-GM President Ed Cole saw a bright future for the NSU Wankel rotary engine. It was small, light and made good power for its displacement. Cole saw it as the ideal powerplant for the Vega, one of GM’s first post-muscle-car-era designs (which also borrowed stylistically from the second generation Camaro). GM paid $50 million – in 1970 dollars – to NSU for the rights to produce the Wankel and sell them in GM vehicles, beginning with the ’73 Vega.

Neither the Vega nor the Monza ever got the Wankel engine, as it turned out. Because despite the expenditure of even more money (reportedly, another $10 million) and two additional years of trying to make it viable, GM engineers could not untie the Gordian Knot of high emissions and low fuel economy – exacerbated by premature rotor tip/apex seal problems that promised to be a warranty and PR nightmare. This came right on the heels of the sleeveless (and melting) aluminum engine debacle that probably ruined the Vega before it ever had a real chance – and GM could not stand another such.

On September 24, 1974, a stoop-shouldered Cole publicly admitted defeat. He was out the door within weeks. GM never touched the Wankel engine again. * The Monza – and its other-division siblings (the Olds Starfire, Buick Skyhawk and Pontiac Sunbird) – were the last RWD (and V8-available) “entry level” cars GM built. After the final run of 1980 models, the Monza and its siblings were replaced by a new line of front-wheel-drive “J” cars, led by the Chevy Cavalier (and its unfortunate Cadillac-badged cousin, the Cimmaron).

* Though nearly forgotten today, the Monza was a successful model for GM. A total of 731,504 were made during the five-year production run. Which works out to nearly 150,000 cars annually – a very respectable number.

* Chevy offered a Spyder performance package for the ’76 model year. It was fundamentally a handling enhancement package – with the centerpiece(s) being larger froth and rear stabilizer bars, heavy-duty shocks and “sporty” steel belted radials, along with trim enhancements such as a metal-trimmed instrument cluster and “Spyder” badging.  For the ’79 model year, a dual tailpipe (but not true dual exhaust) system was also available. 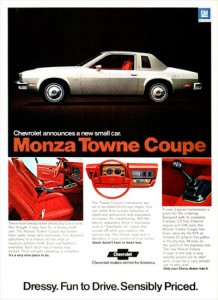 * The Monza (and Spyder) designations were originally conferred on the Corvair; the Monza being the sporty two-door version of the otherwise-economy-intended (and rear-engined/air-cooled Corvair) while the Spyder signified a turbocharged Corvair, dialed up to 180 hp (more power than the ’70s Monza’s top-of-the-line 350 V8 delivered).

* In addition to the more prolifically produced (and better-known) Monza hatchback, a notchback hardtop with a conventional trunk was also offered. Chevy christened this version of the Monza the Towne Coupe (e for olde world cachet?). In addition to the different side and rear and roof sheetmetal, the Town Coupe also had its own front clip – easily identified by the pair of round headlights (Camaro-style) rather than the hatchback Monza’s arguably snarkier-looking quad headlight look. The latter was adopted by Pontiac for the ’77 model year, becoming a signature feature of the Trans-Am that year.