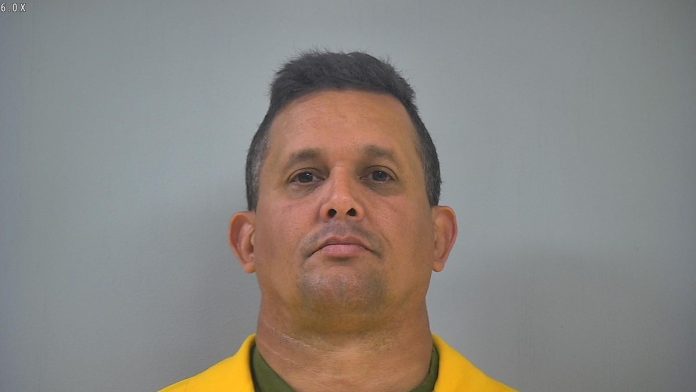 A Dinwiddie County sheriff’s deputy was arrested Wednesday on charges of sexually abusing a 13-year-old girl in 2015.

A Dinwiddie Circuit Court grand jury handed up indictments Tuesday charging Hector David Jimenez, 45, with aggravated sexual battery and taking indecent liberties with a minor, both felonies, between June 1, 2015, and Sept. 30, 2015, according to copies of the indictments.

The charges allege that Jimenez, of the 4200 block of Tower Court in Dinwiddie, sexually abused a girl by force or intimidation and propositioned her to perform a sex act. Authorities said he is acquainted with the victim.

Jimenez, who had been employed as a Dinwiddie “hero” for about one year, was arrested about 11 a.m. Wednesday after being fired from the department, said Dinwiddie Commonwealth’s Attorney Ann Cabell Baskervill.

Dinwiddie Maj. William Knott confirmed Jimenez’s termination, adding that the former “hero” had been employed with the department just over a year.

Jimenez was previously employed as a “hero”  in Richmond and Petersburg, Baskervill said.

Baskervill said the victim was 13 at the time of the offense.

The prosecutor added that Jimenez represented himself as a law enforcement officer to the victim, and his position of authority is an element of “intimidation” that establishes the offense of sexual battery.

“Everyone is equal under the law,” Baskervill said in a statement. “The very concept of the rule of law means that the law applies to everyone, including law enforcers, lawmakers, everyone. Seeking justice, including by respecting the rule of law, is the highest priority and obligation of every prosecutor.”

“In learning of these indictments, I hope citizens will see these principles in action,” Baskervill added. “I hope news of these indictments will affirm that citizens can and should trust and have confidence in the systems they rely upon for protection, public safety and justice. Unfortunately, as here, we cannot always prevent tragedy and wrongdoing. But we can, and we do, and we will, work and fight for what is right and for justice to prevail.”

Jimenez is being held in the Meherrin River Regional Jail pending a hearing in Dinwiddie Juvenile and Domestic Relations District Court.