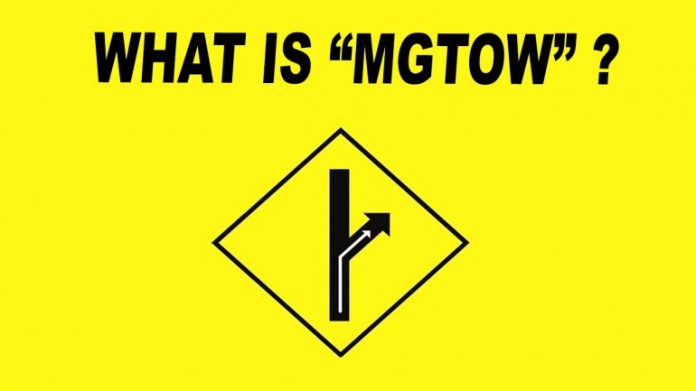 After almost a year now of being single, I am coming around to the MGTOW point of view. If you are not hip to MGTOW – and are a man, especially a single man (particularly a divorced single man) I urge you to look into it.

Men Going Their Own Way.

Because it is bleak out there. You’ve read my rants. In brief: Cultural-social pressures have shattered normal male-female relationships – or at the least, made them exceedingly difficult.

Women conditioned to have male expectations, but warped by female emotions. Men browbeaten to be more like women and yet – somehow – still be men. With all the burdens and obligations, but few of the perks.

Instead of marriage – and family – we have “partners.” A business arrangement, basically – except sold as something more, which it often turns out not to be.

Kids are raised, effectively, by the state – which has assumed almost all significant parental authority. The parents serving as resource-depleted, worn-out milch cows and heavily supervised baby sitters.

Marriage can be wonderful – until it’s not.

When you come to discover – usually rudely, like a bucket of ice water thrown on your face in the middle of the night – that the commitment you made isn’t shared to the same degree by the person you committed yourself to, it seriously wounds your psyche. You will never be the same. That sort of commitment may become psychologically impossible to ever enter into again.

Hence the second marriage “prenup” – which is a not-so-tacit acknowledgment that the next-time-around marriage isn’t going to last, either.

So why bother with it?

The second marriage, I mean.

And what of the first one?

Barring abuse – sexual/physical – or legitimate mental torture – a marriage ought to be (and once upon a time was considered to be) a commitment for life. You both said so at the time. Freely, happily. Unreservedly.

You love this person unconditionally and they (you assumed) feel the same toward you. You buy in thinking: This is forever, come what may. The “spark” may ebb and flow, there will be hard times – it says so, we agreed to it . . .”for better or worse.” Right there, no hidden clauses or lawyer-speak. You love this person, deep down – so no matter what, you would never give up on them or on the couple. You vow to work on it, if it gets rocky. You expect that your spouse will work on it. The both of you, together. Till death do you part.

That sort of commitment is gone. Today’s marriage – despite the vows, which really ought to be updated to reflect the new reality – is analogous to at-will employment: You may be fired at any time, for any or no reason at all.

We don’t need you anymore; here is your two weeks’ notice.

It lasts as long as the man or woman – usually, it is the woman – is “happy.” Which for many women seems to be a state of bliss they’ve been taught to expect that must remain at the same high pitch as the first year of dating or the first years of a marriage.

That, of course, never lasts.

And once she’s no longer “happy,” the marriage can be conveniently thrown away – like an expired warranty card.

This is brutal on the man – or the woman – who really thought it was forever and never would have agreed to marriage otherwise. Who would? Nor ended the marriage, absent something horrific such as physical or sexual abuse or some vile crime committed by the spouse. Such things are exceedingly rare, yet divorce is extremely common. Usually, the marriage breaks up because one person wants out; they have decided they are no longer “happy,” that the marriage no longer “works” for them.

Which is understandable – no one wants to be not-happy. But then why commit to better or worse, richer or poorer? Isn’t that a pretty direct, plain English  . . . commitment to accept being less-than-happy at times?

Most men accept this when they get married. Many women have different ideas because their ideas – to a much greater degree than a man’s – are based on feelings.

Every man who gets married thinks it will not happen to him; that she is the exception. But she is on the receiving end of a steady diet of Oprah and Ellen and a juggernaut of dissatisfaction peddlers who will convince her she is not “fulfilled” and that he marriage lacks “meaning,” hear me ro-ah-oah-ro-ah-oar (loathsome pop song).

Then she waxes resentful, grows cold. The affections stops. The sex ends. The man inevitable seeks both elsewhere.

It’s akin to Charlie Brown refusing to try to kick the football again. He knows Lucy will just pull it away at the last moment. It does not mean celibacy or avoiding the company of women.

It means understanding that the rules have changed and playing the game using a different playbook.