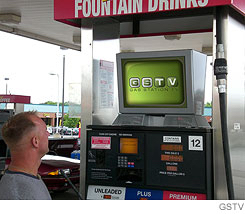 The really top-drawer dystopian novels end up like news accounts that got published a couple of decades before the events they describe.

Orwell’s 1984 came to mid the other day as I rolled up to a pump at an Exxon station and found myself being pestered by a TeeVee built into the gas pump. It came to life – loudly – as soon as I fed my credit card into the reader. Pushy sales pitches masquerading – as online – as “content,” the euphemism for ads from which you will “learn” more as opposed to merely being the object of a sales pitch.

Is there any escape from perpetual peddlering? How long before someone figures out how to embed a tiny flatscreen on the side of a Starbucks coffee cup?

But like Orwell’s Telescreens, you can’t turn it off or even turn it down – unless you are an Inner Party member, I suppose – and the only way to get away is to stop pumping and flee. I did exactly that.  I put in the bare minimum $5 and took off.  Luckily, there are still some old-timey stations that just pump gas and not ads, too. 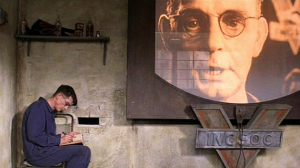 Speaking of which – how about Yahoo?

They are doing the electronic-funnel-in-your-mouth thing, too. If you empty your email (in-box, spam, trash) a got-damned video begins to play. You did not ask – or click. It just does. And turning it off is hard. Some bastard arranged the software such that you have to click double-plus-twice before the damnable “message” cues off.

This has also become SOP on CNN’s site.

Try to read something – and within seconds, a video plays. And will continue playing. Endlessly. YouTube, too. Watch one video – one you chose to watch – and another dials up, unless you manually click on “cancel.”

I guess they don’t want people to read anything – and silence is, of course, dangerous. People might actually think if they weren’t being constantly distracted by metrosexual male announcers with ubiquitously scruffy beards (the one still-allowed expression of superficial maleness) or his always-perky female counterpart.

On and on they yak, never ending.

There are TeeVees in McDonald’s. Everywhere. Most people have several in their homes, there’s one in their car and they carry around a miniature one in their pocket or purse.

Just like 1984 – only voluntary in the technical sense that the government hasn’t exactly forced them on people. But try to avoid them, regardless. It is damned hard. Even if you personally don’t grok or want and may actually despise all this stuff, you’re carried along for the evil ride, as in a rip tide.

A gadget-bedazzled public wants this stuff and the corporations happily oblige because there is money in it. The banks spew debt to finance it and everyone – or almost everyone – “buys” in because hey, plants crave Brwando. It has electrolytes and plants crave that. 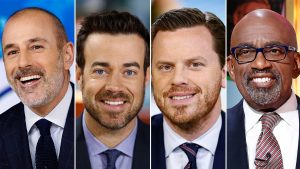 Try to buy a new car without a TeeVee built into the dash. It is almost as hard as finding a car without air bags, but unlike the air bags the TeeVees weren’t mandated by the government. The child-minded fools out there want to be distracted and to peck at images on a screen like seagulls do at scraps of aluminum foil left on the beach.

Most car reviews – not mine, I am an Aurochs –  hardly mention mechanical things or driving things. Instead, they harp on the electronic things. Because, like plants and Brwando, it’s what people crave.

The dystopian novels were predictive in another important way. The only escape is to shed the lot of it. Halfway measures aren’t possible. You face the choice of becoming a bedazzled Elio who craves his Brwando fix each day – or you can become a Mr. Savage, as in the counterpoint to Orwell’s 1984 – Huxley’s Brave New World.

Which, arguably, was the more predictive of the two. Control – via soporific and enstupidation rather than outright violence, which in the Huxlian world was hardly ever necessary. Turn adults into perpetual children, addled and – mostly – docile. Feed them sex and distraction, especially sports but also celebrity.

Keep them entertained – which means, keeps their minds off anything else. Do this early – and often enough – and they will never develop the capacity to think. Or mind being fed “content” while they feed their car petroleum Brwando.

It is, after all, what they crave.