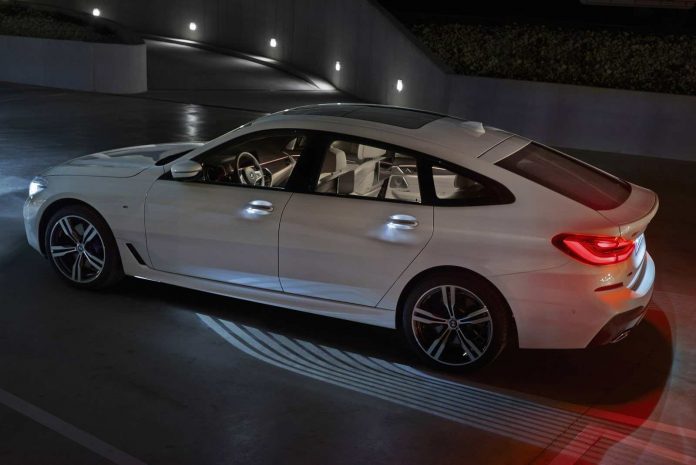 American car buyers, for whatever reason, generally do not like station wagons. This is why you don’t see many new station wagons – especially high-end wagons – even though high-end car companies like BMW sell a wagon version of almost every car they make. 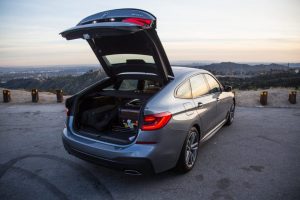 The 640i GT is a five-door/hatchback’d iteration of the mid-sized 5 series sedan.

BMW originally sold it under the 5 Series label but then moved it over to the 6 Series lineup – which series are or were originally supposed to be two-door coupes based on the 5 Series. 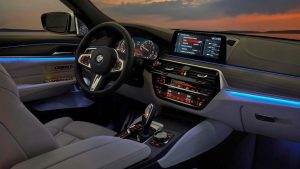 Regardless, the 640i GT has five doors – one of them opening upward, massively opening up the cargo-carrying possibilities of this “Gran Turismo” to almost 70 cubic feet vs. 14.5 cubic feet in the conventionally roofed and trunked 5 Series sedan. In addition, there’s nearly four inches more backseat legroom in the 640i GT than in the 5 Series sedan.

And the GT comes standard with xDrive all-wheel-drive, also extra-cost when you shop the Five. 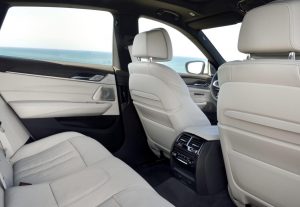 If you compare apples to sort-of apples – the 640i GT vs. the 540i xDrive equipped with the optional 3 liter six and the optional xDrive AWD – the price gap winnows down to just over $10k.

And no matter how much you spend on a Five, you can’t buy the extra space.

The 640i GT looks pretty much the same as before, unless you look closely. It’s slightly longer overall than the 2017 model and has a bit more first and second row legroom than last year, as well as more cargo room. 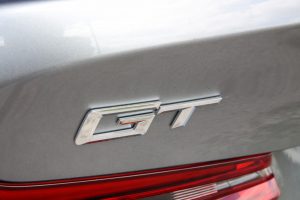 The previous 5-Series GT only had 15.5 cubic feet of cargo space behind its second row of seats – about the same as the 5 Series sedan.

To get the full 60 cubic feet you had to fold fold the backseat flat, which meant less room for people. You had to pick one – or the other. You couldn’t have both at the same time. The updated 640i GT has nearly twice the cargo capacity behind its back seats – 31 cubic feet – without having to fold those seats flat. And with the seats folded, there’s more total capacity now (65 cubic feet).

Also, the standard engine is stronger – the horsepower produced by the 3.0 liter straight six (twin-turbo’d) is up to 335 hp vs. 300 last year. 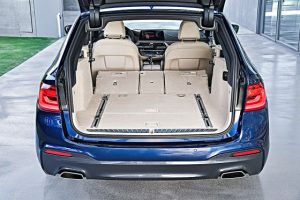 The bad news – if you want more engine – is that BMW no longer offers the 4.4 liter twin turbo V8 that was available in last year’s 5 Series GT.

The new model comes only with the twin-turbo six.

Not a sedan – or a crossover – for those who are tired of them both.

Or a station wagon.

And for good reason.

Instead, the twin-turbo six, uprated to 335 hp (a 35 hp gain) and with all of its 332 ft.-lbs. of torque online at 1,380 RPM, via the meerakul (Ernest Angly voice) of a pair of small, closely snugged turbos that don’t need a lot time to build up the boost.

As a result – and despite its colossus curb weight – the GT can clear 60 MPH in 5.1 seconds, a speedy time given all that weight. If this thing weighed 500 pounds less, it’d be in the high fours, serious speed.

Regardless, it’s not slow. 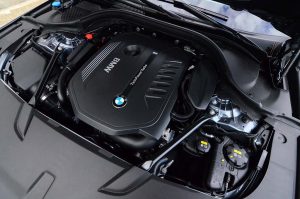 Fast is another thing – but not because the car is overweight or under-powered. BMW electronically limits the GT’s top-speed to 130 MPH because of the all-season tires it comes with. The good news here is that if you want to go faster, there’s no need to wrench. Just reflash – or whatever Dark Art is necessary in these software days we live in. And, of course, shoe the thing appropriately with tires rated to handle the higher-than-130 speeds you’re interested in dabbling with.

On the other hand, 130 is still a lot of speed – and the all-season tires ride softer and quieter and will probably last a lot longer than “summer” performance tires. They are also the ticket for winter – a complement  to the standard xDrive all-wheel-drive.

An eight-speed automatic is standard, with configurable drive modes, including Sport and Eco. 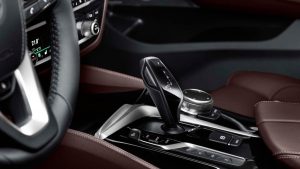 Mileage is 20 city, 28 highway – which for context is hardly less than the much lighter, much-smaller-engined 530i xDrive sedan, which posts 23 city, 33 highway. In real-world driving, it’s a distinction without much difference.

Except when you mash the accelerator.

It’d be better if BMW offered the 3.0 liter turbodiesel, which is available in the 5 Series sedan (540d). And not just in terms of mileage – which EPA rates at 36 on the highway (but which you’ll exceed in the real world).The diesel belts out a mighty 457 ft.-lbs. of torque – more than most V8s and exactly the ticket for getting all that gordo going.

Also not on the roster is the 4.4 twin-turbo’d V8 that’s available in the 5 Series – even though it would certainly make the touring more gran. 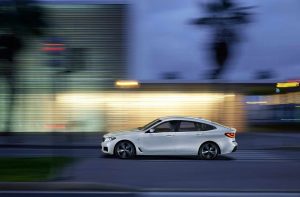 Ol’ Ernest – the purveyor of meerakuls – must have had a hand in designing this thing. Either that or BMW is fudging the numbers – in our favor. Think about it. How does 335 hp move close to 5,000 pounds to 60 in 5 seconds?

I gibs you some context.

Back in 1995, I got my hands on a Ford Mustang Cobra R. This was a race car, just barely legal and just barely street drivable. You could only buy one if you had an SCCA road racing license and were actively competing. 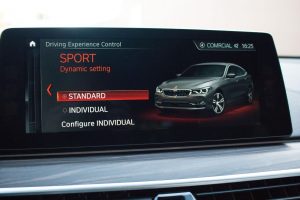 And yet, the BMW is quicker than the Cobra. With an automatic. And a fully-trimmed luxury car’s interior – including back seats, which the Cobra did not have, either. Carpet, too. Plus climate control AC – and a magnificent Harmon Kardon premium audio system.

What is wrong with this picture?

Either Ernest did lay his hands on the BMW’s hood and infuse it with the power of chaysuz . . . or BMW is understating the true output of the twice-turbo’d straight six. Either way, it’s a happy thing. The BMW is an exemplar of the good things which have transpired since the mid-1990s. What was race car acceleration then is almost routine now. 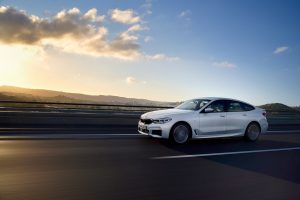 Another meerakul is how BMW damped all that weight. When a car is this heavy, it’s usually either leaden or bouncy; too firm – or much too sloshy. This one’s neither. You can feel the weight shift if you get really aggressive in the curves but in the first place, you have to get really aggressive – as in well above whatever speed is advertised as the maximum lawful speed – and in the second, the car’s limits are more a function of the all-season tires than any deficit as far as the underpinnings. You can get the tires to squeal sooner, but that’s not the car’s fault. And the tires can be changed, if more aggressive cornering is what you prefer.

Meanwhile, the 640i GT lives up to its Gran Turismo badging. The Cobra R would probably take it on a road course. But the GT is the car you’d prefer to drive home in. It is supple, powerful – and exceptionally comfortable. 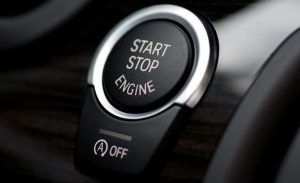 With the exception of one thing –  the obnoxious auto-stop/start system which BMW (and pretty much every other car company) has included as didn’t-ask-for-it standard equiment. Undoubtedly because most buyers would not ask for it – since there’s no advantage to it, except in terms of helping BMW (and the other car companies) do fractionally better on the EPA’s fuel economy test-drive loop.

For us – the buyers – it’s an annoyance at best (the stop-start cycling every time you hit a red light or a momentary pause in the flow of traffic) and – a worst – an additional down-the-road expense. All that stop-starting is hard on the battery, which will surely croak sooner as a result of all that discharging and charging – and there may also be issues down the road with the high-speed starter.

You can still turn the damned thing off, which is good. The bad thing is you have to turn it off off every time you go for a drive. If you don’t, the engine will turn itself off – along with the AC – every time you stop for a red light. 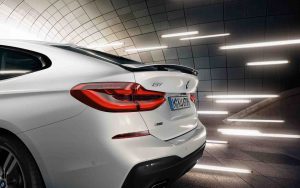 It is a hatchback, but it’s not awkward. For an example of that, see the ill-starred Kim Kardashian-assed Honda Crosstour. Which, of course, you don’t see anymore – because it did look awkward and thus, didn’t sell.

And so, got cancelled.

This one’s selling because it doesn’t look gordo (even if it is). It looks good, in fact. And more like a fastback than a hatchback, which is probably why it’s so easy on the eyes.

And yet – don’t say so out loud – it’s a very practical car.

Because it is a hatchback. 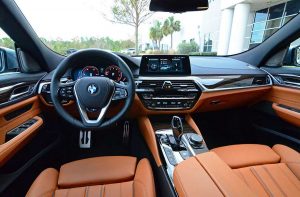 And because of the – say it quietly! – hatchback layout, the 640i has double the “trunk” space behind its second row (31 cubic feet vs. 15.5 for the Five sedan) and an almost-crossover, nearly SUV 65 cubic feet with the second row folded. A full-size Chevy Tahoe SUV only has 15.3 cubic feet behind its last row – and while that can be expanded to 94.7cubic feet, you’ve got to drop the seats to get it. The BMW – which isn’t a crossover, much less an SUV – gives you more cargo room behind its second row, without having to sacrifice the seats.

And the BMW’s cargo area is trimmed out with materials and attention to detail that’s a cut above the passenger space in most cars. Form-fitting carpet, soft suede and voluptuous chrome trim. You could spend a weekend back there.

The Tahoe’s cargo area is ready for bags of mulch. 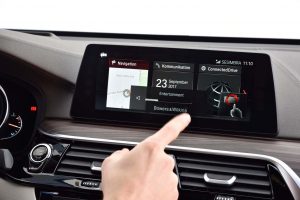 Up front, it’s even nicer. Especially at night, when the cabin is backlit via LED strips which can be changed to almost any color of the rainbow. But what’s really nice is the four inches of additional legroom in the second row vs. what you get in the 5 Sedan.

Also, while the Six isn’t quite a Seven, it’s a lot closer to it than the Five – in terms of spreading out room and otherwise.

You can get Seven-level features in this one, including massaging front seats, power-adjustable rear seats, electrically-powered snug-fit door closers (you lightly close the doors, electric motors pull them – and the frameless door glass – tight) night vision and BMW’s Gesture Control, which is the party trick of the season. Twirl your index finger to the right to raise the volume of the audio system; twirl left to turn it down.

At this price point, everything is powered. But arguably, not everything ought to be. The GT’s rear liftgate for instance. If you’re able-bodied, it’s easier – faster – to just raise it manually, then slam it shut when you’re ready to go.

But you can’t do that here – or there.

The mania to power-ize everything that moves or which used to move when we moved it ourselves is at fever pitch, especially at this price point. So instead of a simple pop it open and slam it shut, you are required to push a button and wait as an electric motor gracefully but slowly raises the liftgate and then wait again for the motor to slowly lower it. 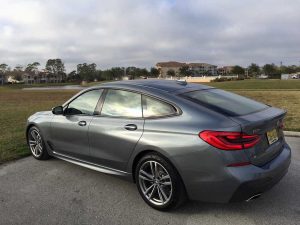 There is nothing wrong with this as an option for people who aren’t able-bodied or who are short or for whatever reason want/need power-assist. But it’s an annoyance for those who don’t. BMW – and the rest – might give some thought to making it optional.

Putting a hatch on the back might be the sedan’s salvation.

Just be sure not to call it that!