How do you make a sedan more practical without making it into something else?

Make it a hatchback sedan.

Buick calls the new Regal hatchback sedan a Sportback – but it amounts to the same thing. Instead of a traditional, small-opening trunk as most sedans have, this one has a tall opening rear hatch – and with the back seats laid flat, the car has enough room to sleep two – and 60.7 cubic feet vs. 14.2 cubic feet in the outgoing Regal sedan’s trunk.

But – key thing – it doesn’t look awkward, as hatchbacks sometimes do. See, for a contrary example, the late unlamented Honda Accord Crosstour, which did.

The Sportback’s side profile is sleek and tapered. It looks like a fastback sedan – which is the same look as some other sedans in this class, including the Honda Accord, Ford Fusion and Hyundai Sonata.

But they have trunks – and don’t sleep any in them.

And with the exception of the Fusion – which isn’t long for this world, because of Ford’s just-announced decision to stop selling most cars in favor of crossovers and SUVs – the Buick is one of almost none in this class that offers all-wheel-drive and a V6 engine, too. 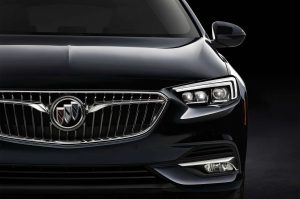 It can also be compared with higher-priced luxury hatchback sedans like the BMW 4 Series Gran Coupe (forget the name, it’s not a coupe).

Or at least, Buick hopes you will make that maybe you’ll make comparison.

And maybe you should.

The base 1SV trim with front-wheel-drive, a turbocharged 2.0 liter engine and a nine-speed automatic transmission stickers for $24,990. From there, you can select Preferred or Essence trims – each available with all-wheel-drive. 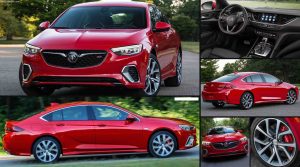 Buick will also offer an RS trim which combines some of the GS upgrades but with a lower sticker price later this year.

The Sportback is all-new for 2018. It replaces the Regal sedan in Buick’s lineup. 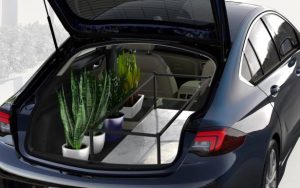 Hatchback layout multiplies practicality without mussing up the lines.

Stronger standard engine than other mid-priced sedans, including Sonata, Fusion and Accord.

Available AWD. Sonata and Honda Accord are front-wheel-drive only.

AWD is still available for less in the Ford Fusion ($27,285  vs. $31,680, the price of the least expensive AWD-equipped version of the Regal Sportback).

For now, at least. 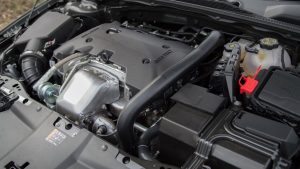 The Sportback comes standard with a turbocharged 2.0 liter four cylinder engine making 250 hp paired with an eight-speed automatic or a nine-speed automatic, depending on whether you choose front-wheel drive (gets the nine-speed) or all-wheel-drive (which comes with the eight-speed transmission).

It’s almost as strong as most of its rivals optional engines. 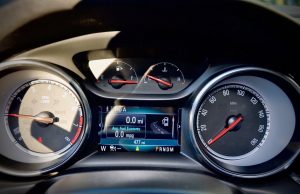 So equipped, the Regal gets to 60 in about 6.3 seconds – quicker than all of its standard-engined rivals and nearly as quick as some of its rivals with their optional engines, including the 2.0-equipped Accord.

You burn a bit more gas for the extra speed, though. EPA rates the FWD version of the Buick at 22 city, 32 highway; with the optional AWD, that dips a bit to 21 city, 29 highway.

The new Accord sedan – as a counterpoint – rates as high as 30 city, 38 highway with its standard 1.5 liter engine. But it takes about one second longer to get to 60. 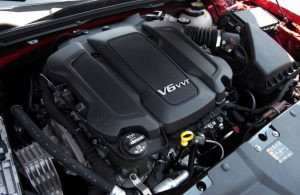 The range-topping Regal Sportback GS comes standard with a 310 hp V6 paired with a performance-calibrated eight-speed automatic and standard AWD.

It is even quicker – zero to 60 in the mid-high five second range. That makes it competitive with the BMW 4 Series Gran Coupe, a much more expensive (and smaller and less roomy) hatchback sedan.

Gas mileage with this combo is 19 city, 27 highway – nearly the same as the 2.0 liter turbo four with AWD. 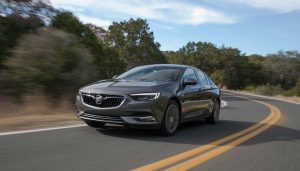 Whether you go with the standard turbo four or the optional V6, you’ll have more power – and stronger performance – than most of the cars in this class.

The Ford Fusion is the only cost-comparable rival which offers more available power (325 hp if you buy the SE trim with the twin-turbo 2.7 liter V6) and stronger performance (5.3 seconds to 60) as well as AWD in the same package.

But Ford just announced it will soon end production of most of its sedans, which presumably includes the Fusion. 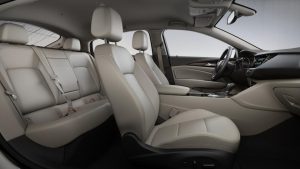 And while the Fusion is quicker, it’s not as plush – or as quiet – as the Buick. Ford designed it to be sporty, and it is.

Buick designed the Regal to be comfortable.

You notice this before you close the door and start the engine. The seats aren’t old-school three-across bench barcaloungers, like you’d find in a ’70s Buick Electra 225 (and those were the apotheosis of long-haul road trip comfort) but they do emulate the give. 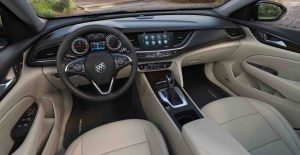 Your back and butt will be glad for a change from the homogenous (and harder on your back and butt) sport buckets virtually every new car, regardless of type, now comes with. The Buick’s chairs have side bolsters, too – but they don’t dig into your sides like an Iron Maiden and while I wasn’t able to cut open the cushions to have a look, they feel like they have more . . . cushioning than is general practice today.

It’s not like your Grampa’s Electra – but it’s also not trying to emulate a BMW, either. There is give here, too. You won’t send hubcaps flying in the curves when you take them at speeds above the speed limit – but you also won’t feel the ripples in the pavement as much. 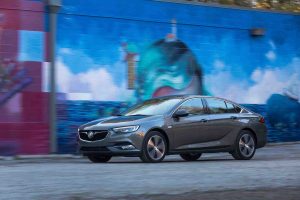 Or hear as much – of the outside world. Buick shot a lot of insulation into the nooks and crannies, triple-sealed the doors and fitted acoustic glass; AWD equipped models include active sound cancellation. All of which combine to tamp down wind and tire noise to a whisper.

The exhaust is also purposely quieted – even the V6’s.

Serenity is the object of this exercise.

You will notice (in all but the GS) the absence of steering wheel-mounted paddle shifters – or even a Sport mode – for the transmission.

This is a Buick, after all. 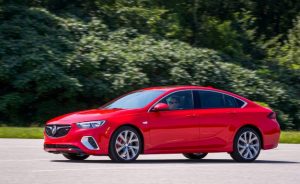 It looks like a fastback – like the new Accord and the Sonata. But unlike both of them, you can drop the back seats flat, raise the rear glass – and stretch out back there and take a nap. Or put stuff back there that would never fit inside the much smaller trunks of the Accord, Sonata and Fusion sedans.

The new Accord – which has a larger trunk than most of the cars in this class – only has 16.7 cubic feet of capacity. The Sportback’d Buick has 31.5 cubic feet and that’s before you drop the back seats and lay them flat. Twice the capacity. And that capacity can be expanded to 60.7 cubic feet, roughly four times the capacity of the Accord’s trunk. 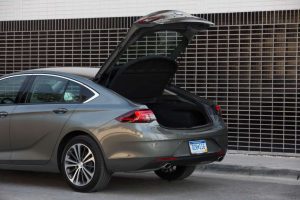 But it’s not just capacity that appeals. It’s also the versatility of the hatchback layout, which opens up the entire interior as opposed to separating the passenger area from the cargo area, as in a traditional sedan.

This – the hatchback layout – may prove to be the sedan’s salvation because it makes the layout viable in practical terms vs. the crossover/wagon layout, which is going gangbusters industry-wide, across all makes/models while traditional sedans (even former can-do-no-wrong makes/models like the Honda Accord and Toyota Camry) are for the first time having sales ED.

But the key thing is to make this layout look good. 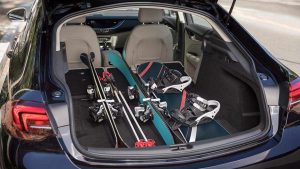 Honda failed to do so with the Accord Crosstour, which had a rump like Kim Kardashian’s but without the sex appeal.

This one probably won’t – because while it’s got capacity and versatility, it doesn’t have a big, cellulitic caboose.

It’s hard to even tell it is a hatchback without actually raising it. Park the Buick next to the new Accord or a Hyundai Sonata. They all have the same – or very similar – fastback styling. But the Buick’s back opens up, while the Accord’s and Sonata’s don’t. 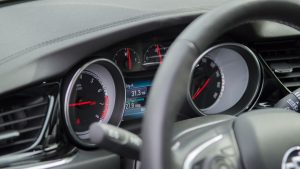 The one downside to the fastback look is the aggressive slope of the rear glass, which distorts the view to the rear somewhat. But beauty always has its price.

In keeping with the Buick vibe, the cabin layout is designed to be classy rather than flashy. The main gauge cluster is analog; both it and the standard flush-mounted LCD touchscreen (7 inches in the base trim, Preferred and Essence trims get a larger 8 inch screen) are blue backlit and complemented by soft-tone trim.

This car does not have a baffling array of menus and icons and swipe/tap/touch interfaces.

There is plenty of technology. 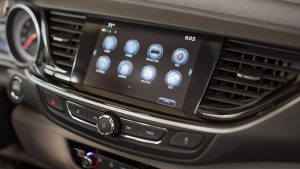 All trims come standard with 4G connectivity and in-car WiFi – but you don’t get dual rear USB charge ports unless you move up to the Preferred or Essence trims. Other desirable features – including the AWD system and the optional Bose premium audio system – are similarly restricted to the more expensive trims, which is the only nit I can pick with this otherwise very appealing hatchback in disguise.

Particularly when you cross-shop this thing against essentially-the-same-thing prestige-brand hatchback’d sedans like the BMW 4 Series Gran Touring. $43,300 to start for that one – with slightly less engine (same 2.0 liters, but 248 hp) and without all-wheel-drive.

It’s true the BMW is “sportier.” 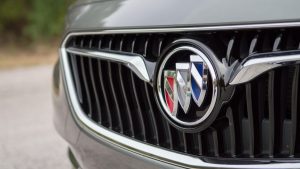 But if you’re not looking for that, the Buick may have exactly what you’re looking for.

Buick may have figured out a way to resuscitate sedan sales – by improving the function without messing up the form.