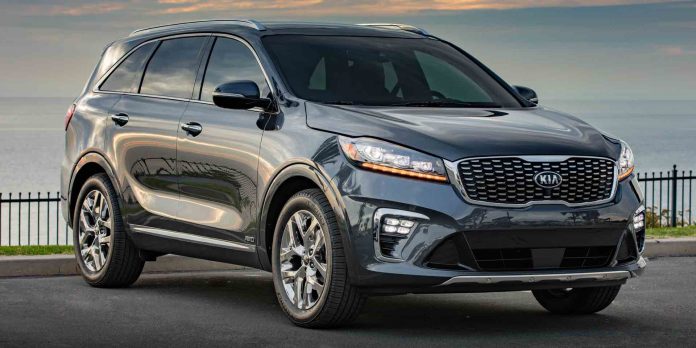 Then you might want to take a look at a three-row but not full-sized crossover like the Kia Sorento.

It can haul seven in its three rows of seats – and fit in a less-than-Camry-sized curbside parking spot. 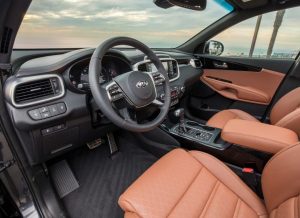 The Sorento is a mid-sized crossover SUV with three rows of seats – still a fairly unusual feature to find in crossovers the Sorento’s size – which has a slightly smaller footprint than many current mid-sized sedans.

Kia doesn’t charge extra for the third row, as some others do – including higher-priced others, like the Acura MDX an Lexus RX. 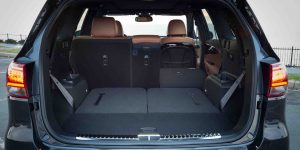 Of course, nothing is perfect in this world – and what’s not perfect about this Kia is the loss of cargo space for the sake of additional passenger space. With its third row up, there is only 11.3 cubic feet of cargo capacity behind the third row – vs. 39.2 cubic feet behind the Edge’s second row.

But if you need more cargo room, you can always make more room.

Plus the option to make room for more people. 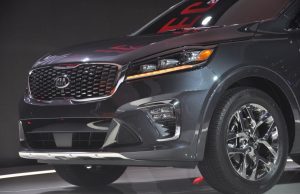 Kia has added a new Smart setting for the standard (with either engine) driver-selectable powertrain modes – the others are Eco, Comfort and Sport. When Smart is selected, a learning algorithm is engaged which tailors things like throttle response and transmission shifting characteristics according to how you drive, as you drive. 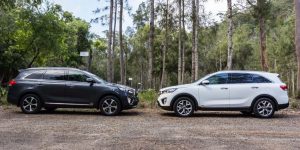 The formerly optional 2.0 liter turbocharged engine has been dropped but you can still get a four-cylinder Sorento without the turbo – if you want a less expensive Sorento.

A 40 MPG-capable diesel engine is on deck, too.

Interior and exterior styling (including LED headlights on higher trims) has also been refreshed and the ’19 Sorento is available with new features, such as wireless cell phone charging and a Harman Kardon premium audio system.

Cargo space is tight when third row is in use. 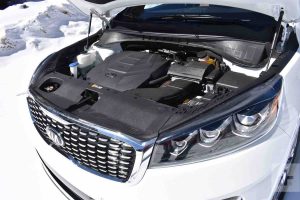 One of the things which makes  the Sorento a little different is that both of its available engines are pretty large – relative to competitor’s standard and optional engines.

And neither of them are turbocharged.

Put another way, Kia is still relying on physical displacement for power – rather than turbocharging smaller engines to replace the power lost to smaller displacement.

There are definite real-world advantages to this approach – especially in a family vehicle that will probably rack up a lot of miles and most of those miles in stop-and-go driving, which is hard on mechanical things generally and turbochargers specifically. They get hot – and stop-and-go-driving makes it hard to keep things cool. The hotter mechanical things get, the shorter their service lives tend to be. 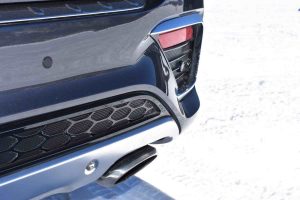 A turbo’d engine is also a more complicated engine, with more moving parts – and so more things which could go wrong at some point during the vehicle’s life.

A turbocharged engine is also usually a harder-working engine, especially if it is a small engine and so dependent on the turbocharger’s boost to make up for its small displacement.

Standard equipment is a 2.4 liter four that makes 185 hp – 15 horsepower more than the 1.5 liter turbo four that’s standard in the Chevy Equinox, another mid-sized (but two row-only) rival. 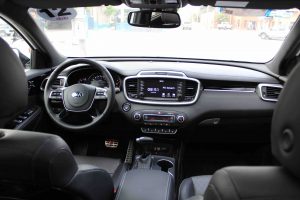 The Ford Edge comes standard with a stronger (245 hp) 2.0 liter four, its output goosed by a turbo. But the Ford’s sticker price is also goosed by almost $4,000 vs. the base price of the 2.4 liter-equipped Kia.

The 2.4 liter engine comes paired with a six-speed automatic and your choice of standard front-wheel-drive or (optionally) all-wheel-drive.

Zero to 60 takes about 9.5 seconds. It’s not especially speedy but it is sufficient.

Mileage with the 2.4 liter engine is also competitive with the turbocharged competition: 22 city, 29 highway for the FWD version and 21 city, 26 highway with the optional AWD system. 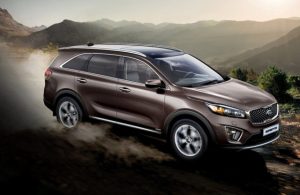 This is a bit less on paper than the turbo’d Equinox’s 26 city, 32 highway (FWD; 24 city, 30 highway with AWD) but in real-world driving, turbo’d engines often deliver noticeably worse-than-rated mileage because their efficiency depends on not relying on the turbo to make up for the lack of displacement. If you can keep your foot off the accelerator pedal, you may see the mileage numbers posted on the window sticker. But if you like acceleration – and call upon the turbo to deliver it – your mileage will probably  . . . vary.

Besides which, the on-paper disparity isn’t much, either. Just 3-4 MPGs.

If these tiny turbo’d engines delivered a significant fuel efficiency advantage while also delivering performance as good as a larger engine of comparable power without a turbo – then the case for these tiny, turbo’d engines would be more persuasive. 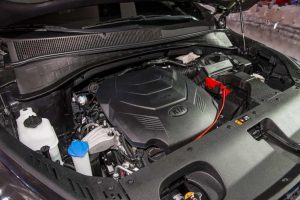 As things stand, it isn’t.

If more power – also without a turbo – is on your list, Kia offers a 290 hp 3.3 liter V6 as optional equipment. This one makes more power than the Equinox’s optional 2.0 liter turbo four (no V6, turbocharged or otherwise is available in the Chevy) and brings the Kia’s 0-60 time down to just over 7 seconds – right there with the price-equivalent Edge.

This engine is paired with a new eight-speed automatic and (again) either FWD or AWD.

The V6-equipped/AWD Sorento can also pull a very solid 5,000 lbs. 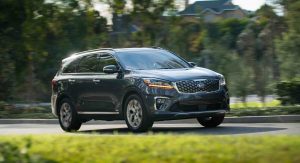 It is only 189 inches long – several inches shorter than a current Camry (192.7 inches long) and it has a much smaller footprint than full-sized/three-row crossovers like the Nissan Pathfinder (198.5 inches) and is almost tiny compared with not-so-mini-vans like the current Honda Odyssey – which stretches 203.2 inches (a stunning two feet and change longer than an actually mini ’80s-era minivan such as a Dodge Caravan).

These busses can be a handful.

They almost need tugs to guide them into parking spots – and they don’t leave much room in the garage for  anythings else. 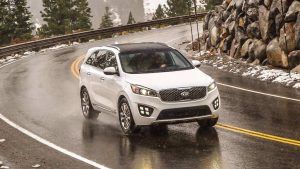 If you aren’t comfortable driving something that makes you feel as though you ought to get a CDL – or a captain’s hat – then this one will appeal. It fits easily into car-sized parking spots and in between other cars parked on either side. It leaves room in the garage for other things, too.

The Sorento’s reasonable size makes it not a chore to drive it – or to own it.

You ought to know ahead of time that the four cylinder-equipped version’s main advantage isn’t tamping down what you’ll spend on gas. I averaged 22.8 MPG during my weeklong test drive; this jibes with the published stats and is far from spectacular.

You will save money, though.

By spending less of it on the Sorento equipped with this engine. If you stick with the base L trim, you’ll only spend about $26k – easily three or four thousand less than anything else with three standard rows of seats. 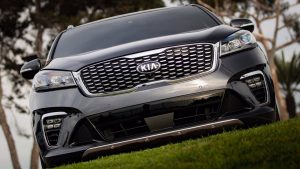 But test drive it before you buy it.

The four is adequate . . . if you’re not the type of driver who likes to lead the pack or gets restless when the pack is led by a slowpoke. And if you don’t usually have people sitting in all three of the Sorento’s rows.

If you do, you will probably want the V6. The additional 105 horsepower being a necessary counterweight to the additional weight of those additional people. And you’ll end up getting about the same mileage as you would with the four.

The diesel – not yet available, but probably available by spring – ought to give the best of both worlds: Mileage and power. When this review was written in late summer, no firm details were available about the pending diesel’s specifications, but they ought to be in the same ballpark as those of the 1.6 liter turbodiesel that’s already available in the Chevy Equinox. 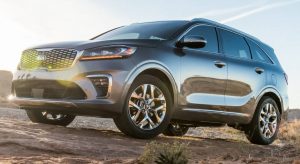 It is capable of 38 MPG on the highway, according to the EPA – much better mileage than that achieved by any gas-burning turbo four in the Sorento’s class – while also almost matching the torque output of a gas V6 such as the Sorento’s 3.3 liter mill.

Might be worth waiting for – assuming Kia can get the diesel past Uncle’s EPA. 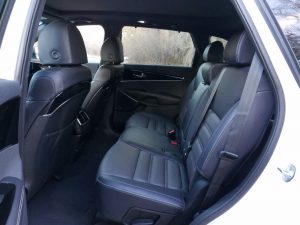 The Sorento is very spacious in its first and second rows – with an astounding 44.1 inches of driver and front seat passenger legroom (42.6 inches in the Edge) and 39.4 in the second row (almost the same as the Edge’s 40.6 inches) with the additional seats behind all that.

The third row is a squeeze, both to access and to sit in. But the point is, it’s there – and isn’t in same-sized rivals like the Edge.

Which gives the Kia the edge.

You have 7.3 inches of ground clearance – which is about an inch more than most cars and enough to give you an extra margin of snow-fording without needing a ladder or grab handles to climb into the thing.

The dash layout doesn’t wow you with unusual shapes or other dealer showroom drama – but that’s a virtue you will come to appreciate as you spend time behind the wheel. For example, most functions can be operated via physical (and physically large) buttons that you can easily see and operate effectively by feel. It is a trend – arguably not a sound one – to make most interfaces cell phone-like, touchscreen tap and swipe. The problem with that way of doing business is that it takes the driver’s concentration away from the road and directs it toward a screen, since you can’t tap/swipe accurately just by feel, without also looking at what you’re tapping and swiping.

The Sorento’s LCD screen is a touchscreen, but you don’t have to touch it to operate it – and that’s smart design. 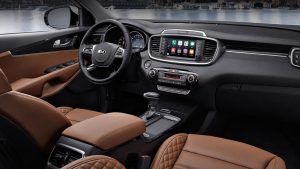 Another subtle but very ergonomically sensible design is the location of the AC controls. They project outward just slightly from the dashboard – putting them within easier reach of the driver. Once again, nicely large, easy-to-operate by feel buttons and knobs control the various operations.

The USB hook-up and power points are similarly conveniently situated in a cubby ahead of the gear selector – where both driver and front seat passenger can easily plug things in without doing yoga contortions or rooting around by feel in the bowels of the center console storage box – where you’ll find the plug-in ports in all-too-many other vehicles, crossover and otherwise. 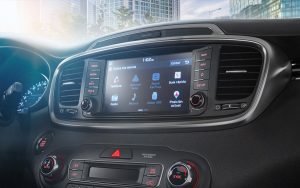 General visibility is good – with one notable exception and it’s a general problem with new vehicles of all types: Government-mandated anti-whiplash headrests wipe out about a third of what ought to be your view to the rear. The good news is that if no one’s riding in the third row, you can recover that lost third by simply folding down the seats.

Of interest: The Sorento’s Hyundai-badged cousin, the Sante Fe, offered a third row last year (technically still this year) but doesn’t for the new year (2019)  . . . at least, not until the new diesel engine becomes available. When it does, you’ll be able to buy a Sante Fe XL – but only if you also buy the diesel engine. 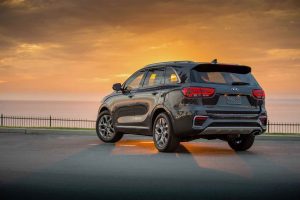 In addition to being too huge, another deficit they suffer from is the lack (for the most part) of all-wheel-drive, a feature many buyers want almost as much as the additional passenger-carrying capacity of having three rows of seats. For reasons that remain hard to grok, formerly popular minivan models like the Honda Odyssey and Toyota Sienna are front-wheel-drive only.

Even so, they can cost almost $50k fully dressed. Are they “nice”? Sure. But so is everything these days – and everything doesn’t cost $50k. Even when it comes with AWD.

It is no wonder that crossovers like this Kia are eating their lunch.

It’s not too big – and it’s not too small. That might make it just about right.

VW Doubles Down on Warranty Coverage