Here’s a rough one:

Attorneys for plaintiff Hui Jie Jin laid out the allegations in a lawsuit filed late last week in Northern District of California. The suit claims Jin suffered a permanent brain injury, along with contusions and abrasions, as a result of what her attorneys called an unlawful arrest.

Nate Schmidt, the heaf armed government worker, confirmed that the department conducted an “internal investigation” after the incident and found Corvello’s use of force to be “within policy.” 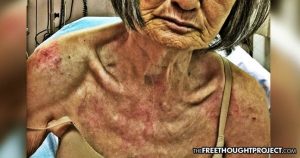 Schmidt declined comment on the allegations in the civil suit but confirmed that Corvello is still employed by the agency.

Jin and Corvello first encountered each other on the morning of July 21, 2017, when Jin was out shopping for groceries. The lawsuit claims that Corvello began yelling at Jin while she was allegedly jaywalking, but because Jin is “profoundly deaf” she couldn’t hear or understand his commands.

As Corvello moved closer to her, the suit alleges, Jin pointed to her ear with one hand and waved her hand back and forth with the other to signal that she was deaf.

“Despite recognizing that Mrs. Jin could not hear or understand him, Corvello made no attempts to effectively communicate with Mrs. Jin at any point before or during her arrest,” the suit states.

More officers arrived on the scene and performed a search of Jin and her grocery bags, according to court documents, and during this time Jin emptied her pockets to hand Corvello her California identification card, disabled senior citizen bus pass, and a handwritten card with the name and phone number of Jin’s daughter for emergencies.

“Mrs. Jin was terrified, but at no point did she resist arrest or attempt to flee, nor could she due to her age and disabilities,” the complaint states. Jin prayed and repeatedly bowed in front of Corvello “in order to beg … for mercy and not to hurt her.”

In response, the suit alleges, Corvello slammed the woman to the ground, placed a foot or knee behind her neck or back and handcuffed her. Jin passed out and was taken to the hospital via ambulance, according to the suit, which alleges violations of the Americans with Disabilities Act, negligence, and deprivation of Jin’s civil rights.

Jin was issued a citation for jaywalking and resisting arrest, but no paperwork exists and no charges were filed, the suit states.

Opel to Join GM in Renting Cars Rather than Selling Them