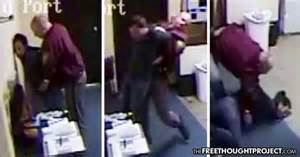 Here’s a story out of South Dakota about a six-foot-two, 220 pound armed government worker named Cody Jansen, who was caught on surveillance video attempting to kill or at least severely hurt a man almost half his size just for the sadistic kicks of it.

Troy Rokusek, who is five-foot-six and 135 pounds, was stopped for suspicion of DUI. Rokusek agreed to submit to a blood test without a warrant and was driven back to the station. He was not combative, did not “resist.”

When Rokusek got back to the station, Jansen told him that he would have to submit to the blood test in the garage. Rokusek then asked if it would be possible to have the procedure done in a hospital or cleaner area because the garage was unsanitary.

This apparently enraged the AGW, who then ordered Rokusek to his feet so he could handcuff him and then forcefully draw his blood in the garage. As surveillance video (which, interestingly, is not available onYouTube; they appear to be purging videos unfriendly to AGWs, but I found it here) shows, Rokusek complied, stood up, and put his hands behind his back.

He did not “resist.” He was “compliant.” 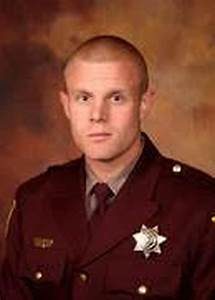 Nonetheless, Jansen slammed Rokusek into the wall face first, placed him in a “double chicken wing” hold and pile drove him face first into the ground. Rokusek, whose hands were behind his back, was unable to brace himself or stop his face from smashing into the concrete floor.

Immediately, blood begins pouring from his mouth as the AGW continues his assault.

The brutal “takedown” could have killed him Rokusek. Luckily, Jansen’s assault only fractured Rokusek’s face and cost him a few teeth.

After the incident Jansen lied, claiming that Rokusek “resisted arrest.” This was proved to be a lie by the video and the court agreed, awarding Rokusek $100,000 – paid by the taxpayers, not the vicious costumed creep who committed the assault.

“It is not clear from the video whether Rokusek pushed back against Jansen, but the video shows that Rokusek’s head remained against the wall until Jansen threw him to the ground,” the judge wrote. “Jansen slammed Rokusek to the ground while he was in the double chicken wing position, unable to protect his head and face. On the video, blood can be seen pooling near Rokusek’s mouth on the floor.”

Following the incident, Rokusek had to be taken to the hospital to be treated for his injuries. Whether or not Rokusek was charged with DUI remains unclear.

For losing his temper and nearly killing a man half his size, Jansen was  given an internal demerit point for an “improper takedown.”

“Cody,” the reprimand states, “you are much larger than Mr. Rokusek who was extremely intoxicated. Considering your training, size, and the level of resistance from Rokusek, your actions to control him were not reasonable and significantly increased the potential for injury.”

After this slap on the wrist the AGW – who should’ve been immediately fired and charged with assault – was instead rewarded with the department’s highest honor:

As the Argus Leader reported, Jansen was named “trooper of the year” by the Highway Patrol for “continued demonstration of exceptional service to the agency, citizens and communities.”

Mind: This psychopath is still “on duty” and “serving and protecting.” A fact worth considering if you are thinking about setting foot in South Dakota.