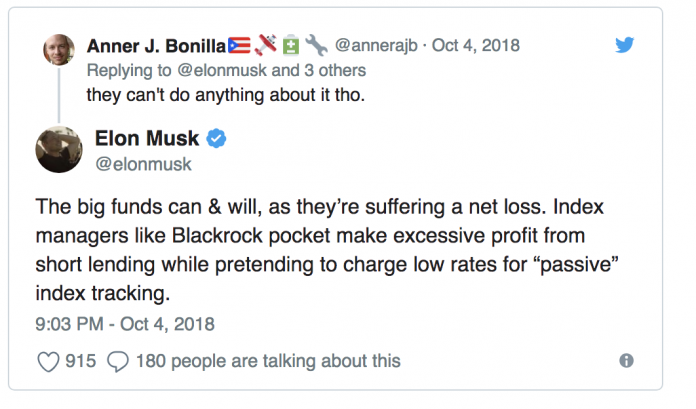 The deterrent effect of Elon Musk’s $20 million wrist slap for securities fraud was revealed yesterday, when the PT Barnum of our time let fly 15 Tweets in less than five hours – causing Tesla’s stock value to dump by 7 percent.

The SEC’s response – if any – will be interesting. They could rescind the wrist-slap deal in favor of something more substantive.

“At the very the least, they (the SEC) can read the riot act to Musk’s lawyer,” said Stephen Crimmins, a former SEC enforcement lawyer who’s now a partner at Murphy & McGovern. “Beyond that, if they feel he hasn’t lived up to his deal, they can theoretically seek to pull the settlement.”

Musk was encouraged to enter the settlement by celebrity billionaire Mark Cuban, who litigated for several years with the SEC over insider trading allegations, The Wall Street Journal reported. Musk and Cuban were connected by a securities lawyer who has represented both of them.

“I’m shocked,” Charles Elson, director of the John L. Weinberg Center for Corporate Governance at the University of Delaware, said of Musk’s attack on the agency. “It’s only inviting the SEC to rethink the settlement. And it’s going to make it much tougher to attract independent directors to join the board.”

U.S. District Judge Alison Nathan, who must approve the settlements Musk and Tesla agreed to with the SEC, gave both sides until Oct. 11 to explain why the agreements are fair and reasonable.

The SEC accused Musk in a lawsuit a week ago that he misled investors with his infamous Aug. 7 tweets about having the “funding secured” to take Tesla private. The company’s shares tanked 14 percent the following day as the agency sought to ban Musk from serving as a company officer. After the settlement reached over the weekend, the shares surged 17 percent on Monday.

In court papers and at a news conference, the SEC went to great lengths to spell out Musk’s carelessness and erratic behavior, highlighting his threat earlier this year to “burn” investors betting against Tesla stock. The SEC also alleged that Musk rounded up the buyout price for Tesla to $420 a share to amuse his girlfriend at the time with a marijuana-culture reference.

Meanwhile, Musk also dragged investment firm BlackRock into his long-running dispute with short sellers, alleging the fund manager was reaping heavy profits by lending shares they hold to this group of investors. Representatives for BlackRock in London weren’t immediately available for comment. The fund manager held about 3.8 percent stake in Tesla as of the end of June, according to data compiled by Bloomberg.

Reader Question: The Stuff We Don’t Get?