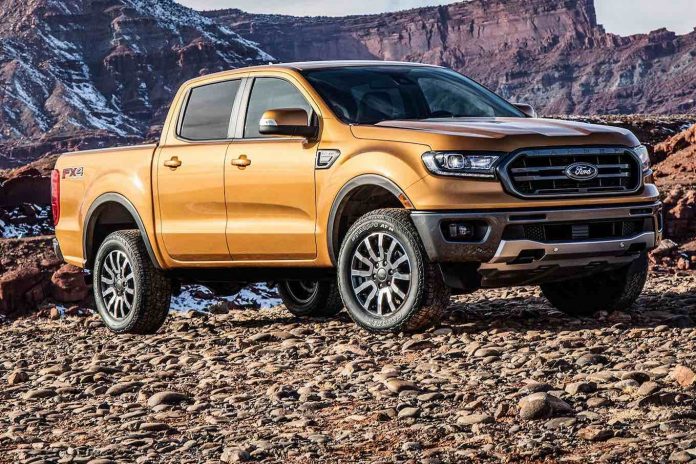 The Ford Ranger is back  – and it’s much bigger.

The formerly compact pick-up (which was last available in the U.S. back in 2011) returns for the 2019 model year after many trips to the all-you-can-eat buffet. It is now nearly as big as the F-150 (Ford’s full-size truck) used to be. 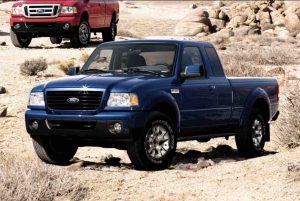 This in spite of the new Ranger having a much smaller engine (2.3 liters and four cylinders vs. the 2000 F-truck’s standard 4.2 liters and six cylinders) that is also direct-injected (the 2000 F-truck’s engine was merely port fuel-injected, a much simpler system) and paired up with a ten-speed automatic transmission that has three overdrive gears – vs. just the one overdrive gear inside the 2000 F-150’s five-speed manual (or four speed automatic) transmission.

You do get much more horsepower – 270 vs. 205 for the old truck’s V6 – because the new truck’s little engine is heavily turbocharged. 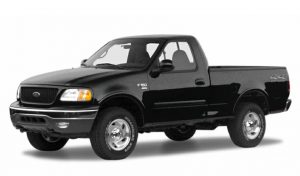 But the mileage gains vs. a full-sized truck are not much more than a toss-up, despite all the technology – because the new Ranger is a much larger and much heavier Ranger than the actually compact Ranger Ford used to make.

In part, because the new Ranger will be sold only in four-door form – either extended SuperCab or SuperCrew, the latter with four full-size doors and the former with smaller ones. 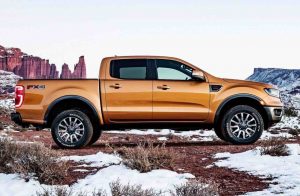 You could opt for a seven-footer, too – which enabled the physically smaller old Ranger  to carry more stuff in its bed with the tailgate closed than the new Ranger can with its optional six-foot bed withe gate down.

And even with the optional seven-foot bed, the old Ranger was still almost a foot shorter end to end (189.4 inches) than the new Ranger is with the short bed (210.8 inches.) Which made it much easier to park the old Ranger as well as make U-turns without having to stop, reverse, make adjustments and then continue. 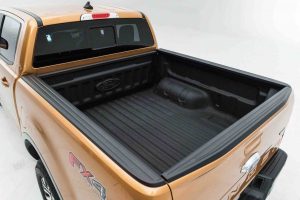 The old Ranger also delivered almost exactly the same mileage as the new one, too – 22 city, 27 – albeit with much less horsepower (143) but without the cost/complexity-adders of a turbocharger or a ten-speed transmission.

It wasn’t as powerful – or as capable.

But it was reasonably fuel-efficient.

And it was a truck.

The new Ranger is more of an SUV with a vestigial bed. It seems to have been designed mainly for carrying passengers (and labrador retrievers) rather than cargo. To be recreational rather than occupational.

For play more so than work.

It appears there is no longer a market for a compact truck with a proportionately large bed; a truck that doesn’t need a direct-injected engine or a ten-speed transmission to get over the 20 MPG hump. Or a turbocharged, direct-injected engine to make the power necessary to haul around 4,000-plus pounds of truck – before anything is put in the bed.

But the end result is so close to being full-sized in fact that the only reason it’s not formally considered that is because today’s full-size models are super-sized. They make the full-size trucks of the recent past seem almost DeVito-esque next to their jacked and stacked Arnoldness. 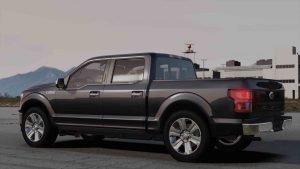 And the new F-truck is Gulliverian in other proportions: 77.3 inches tall, with bedwalls so high a six-foot man can’t lay his palm flat on the bed floor – and might not be able to touch it at all – without standing on a milk crate.

If you have the opportunity to view a circa 2000 full-size pick-up parked next to a current full-size truck . . . or the new Ranger parked alongside the old one – you will be astounded by the growth spurt.

It’s a kind of vehicular acromegaly, the pituitary aberration which afflicts some unfortunate humans with giantism. Like Andre the Giant, for instance. And Ted Cassidy – Lurch from The Addams Family.

It’s what people want, it seems. Supersize everything –  from waistlines to trucks.

One wonders, though, how Ford will manage to continue selling this upsized, not-very-fuel-efficient Ranger under a regime that demands even trucks average almost 50 MPG just five years from now.

A compact-sized Ranger with a diesel might have at least gotten two-thirds of the way there.

But we can’t have compacts – because of something called the “chicken tax” (see here). This is why I italicized appears in relation to what the market (may or may not) actually want earlier in this rant.

And while Ford does offer a diesel-powered version of the new and upsized Ranger, it probably won’t offer it here.

Because although the government pretends to care about gas mileage, it does all it can to stymie it by (effectively) outlawing high-efficiency diesels and also by force-bloating vehicle design for the sake of “safety”  – which is a gross misnomer, since what we’re really talking about is how a vehicle deals with a crash, nor whether it is more likely to crash.

So we get bigger, thirstier – and more expensive.

Because that’s how Uncle rolls.