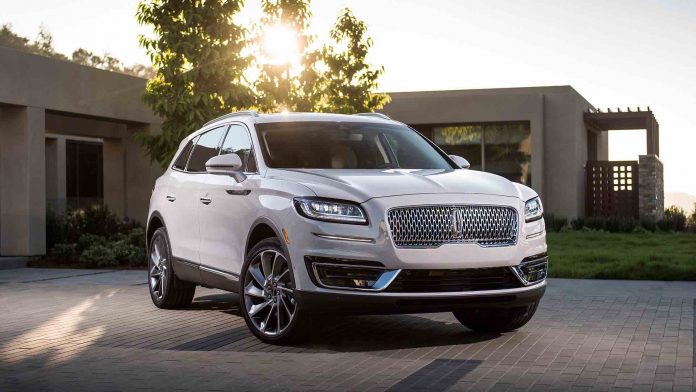 Sometimes, the loudest guy in the room doesn’t get all the attention.

Lincoln is quietly establishing itself as America’s premier luxury car brand – at the expense of Cadillac, which is in real danger of losing that title (sales have been wilting for the past three years).

By emphasizing luxury – an attribute that’s  been sharing equal billing with sportiness in almost ever “luxury” brand car. 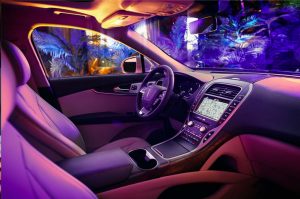 Not that there’s anything wrong with being sporty. The problem – for Cadillac – is that everyone is already trying to be that.

Lincoln’s idea is to offer a counterpoint – to all of them.

It began with the introduction of the new Continental – Lincoln’s flagship sedan. Which makes no effort to be BMW’s (or Benz’s) flagship sedan but rather something those sedans are not. 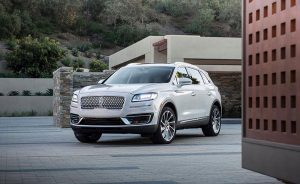 It replaces the MKX, which has been retired.

Though it’s similar in size and general layout to mid-sized, luxury-brand crossover like the Lexus RX350 and Cadillac XT5, it differs from them in several objective – and subjective – ways.

Objectively, it’s one of the few luxury crossover SUVs in its class that offers more than one engine – and having more choices is arguably one of the definitions of luxury. 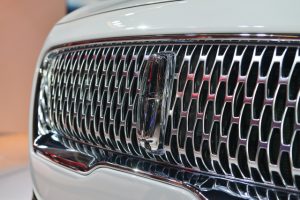 Lincoln offers buyers the choice of turbocharged four or twin-turbocharged V6. Rivals like the XT5, RX350 and Audi Q5 come with just one engine, no choices – regardless of trim.

The Nautilus also has substantially more cargo capacity than several of its rivals – and a roomier back seat than most.

It also offers 22-way heated and massaging seats – one of several luxury features not offered in the luxury-sport competition.

And how about free annual detailing? Unlimited car washes? Pick up and delivery service when the vehicle needs service?

Nautilus offers those things, too. The others don’t. 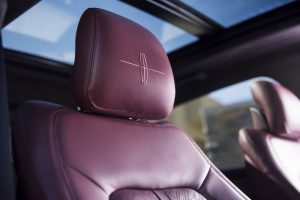 Prices start at $41,335 for the base trim with front-wheel-drive and the standard 2.0 liter turbocharged four cylinder engine, paired with an eight-speed automatic transmission.

That one comes standard with the twin-turbo V6 and AWD, a spectacular 19-speaker Revel Ultra premium audio system and an indulgent array of concierge services, including those free cars washes whenever you need one, the pick up and delivery service whenever the vehicle needs to be serviced, the free annual detailing and membership in a members-only restaurant club. 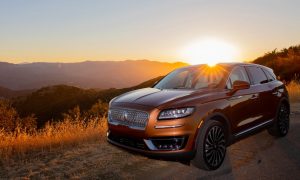 The Nautilus shares some of its chassis underpinnings with the previous MKX but is otherwise an all-new model, including its standard and optional drivetrains.

AWD available with either engine; almost 8 inches of ground clearance either way.

Luxury (and tech) features you won’t find in the competition.

It’s interesting that many of the luxury-sport offerings in this class only offer one engine.

Choice being an element of luxury. 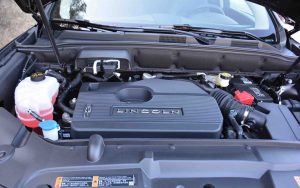 The standard Nautilus engine is a 2.0 liter turbocharged (and direct-injected) four cylinder engine that makes 250 horsepower and a stout 280 ft.-lbs. of torque at 3,000 RPM.

It comes paired with an eight-speed automatic transmission.

Front-wheel-drive is standard, but you can select an optional all-wheel-drive system – one that’s also different from the run-of-the-mill because it can automatically disengage when it’s not needed for traction. This decreases rolling resistance and improves gas mileage – while also reducing wear and tear on AWD system components.

Most AWD systems are full time, meaning they are always engaged – even when AWD isn’t needed.

Equipped with this engine, the Nautilus can get to 60 in 5.8 seconds – making it one of the quickest vehicles in its class.

If you’re in a hurry.

Surprisingly, the V6 is slightly more fuel-efficient than the base 2.0 liter engine – at least, on the highway. Where it averages 27 MPG vs. just 25 for the turbo four. The smaller engine splits the difference on the other end of the spectrum – city mileage – where it rates 21 to the V6’s 18 MPG.

Unfortunately, automatic stop/start (ASS) is standard, no matter which engine you pick.

This system – like electric cars – is practically being shoved down our throats via government regulatory pressure, in both cases to help the car companies comply with federal fuel economy fatwas.

But ASS has its costs. 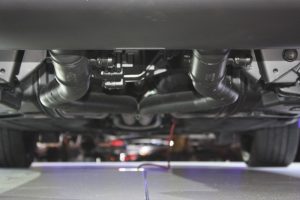 Battery life is apt to be less, due to the strain on it of having to restart the engine a dozen times each day instead of just a couple of times. Whatever you “saved” on gas – maybe 1 MPG overall – will be countermanded by having to spend $100 on a new battery every two or three years rather than once every four or five.

ASS is also not luxurious.

Though the Lincoln’s stop/start is not jarring, it’s noticeable. You can still feel the engine cycling off an on.

And in a luxury car, the point is to feel – and hear – as little as possible.

The good news is you can turn ASS off. There is a button you can push to defeat the system – and let the engine run until you turn it off.

The bad news is that – as in every car that has ASS – you have to remember to turn the ASS off, otherwise it will automatically turn itself on – and the engine off.

Having to remember to do this is also less than luxurious.

One’s vehicle ought not to pre-empt – or pester you. 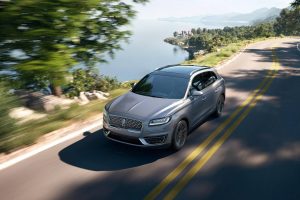 The Nautilus is such a pleasant place to spend time in that you may find yourself looking forward to your commute.

And taking the long way home.

Exterior perimeter lights illuminate automatically as you approach; then the cabin lights gently beckon. Close the door, the outside world is silenced by acoustic laminated glass.

Now turn the 22-way massaging seats on; select your favorite playlist and let the Revel audio system transport you. 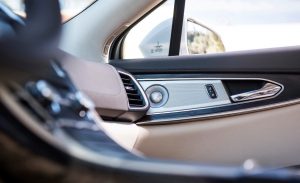 Normally, the base engine is lacking in the gumption department – for the sake of being easier on gas.

Here, the chief downside of the four vs. the six is that there’s no mileage benefit to be had.

It’s usually the case in these Latter Days that when two engines are offered, one smaller, the other larger – the hope (on the part of the car company, for the sake of federal fatwa compliance) is that most people will buy the smaller – and more fuel-efficient – four, which helps the car company meet the MPG mandatory minimums decreed by the fatwa.

The larger/stronger engine can be advertised as available. 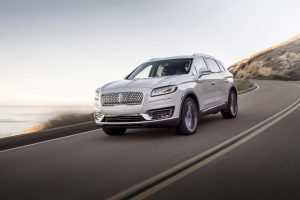 You just have to pay extra for the additional gumption.

Here you can pay extra – but it isn’t necessary. To get the gumption.

The turbo 2.0 four, like many of its kind, makes the torque of a 3.5 liter V6 (without the turbo) and has it sooner. The optional V6 – with that pair of turbos – has even more torque.

Both whisk the Nautilus forward like an incoming tide, easily and naturally.

Shifts – all eight of them – are noticeable only if you keep track of them on the instrument cluster’s display. There are paddle shifters for manual control over those shifts, but why would you? 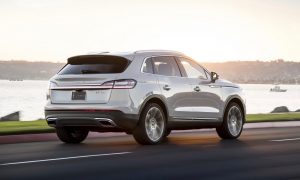 They are likely to gather much dust.

Only an electric car is quieter. And no EV can travel almost 500 miles on the highway without a pit stop. The Nautilus can. And it doesn’t take 30-45 minutes, minimum, at a “fast” charger to resuscitate, either. 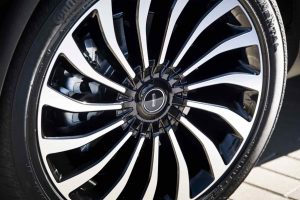 But the Lincoln’s supreme advantage over the hounds chasing the luxury-sport rabbit is that it is indifferent to the rabbit – and the hounds.

The others may be able to generate better skid pad numbers – and quicker lap times.

But who drives crossover SUVs that way, except in commercials? What buyer in search of luxury cares about such things?

On the other hand, everyone has to drive over potholes. The difference is you’ll rarely notice them from within the Nautilus.

Luxury car designers once knew the importance of this. Lincoln hasn’t forgotten it. 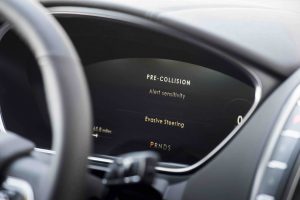 You can order the Nautilus with a bundle of driver-assist system and Lincoln is touting them proudly. These include not just the usual automated braking assist but also a lane keep assist system that actually does keep the Nautilus in its lane, not just blink and beep at you if it senses you’ve “departed” from your lane.

Within limits, it can steer the Nautilus for you – the idea being to reduce the number of small steering inputs one must normally make to keep a vehicle centered in its lane – and to reduce the amount of effort the driver has to put into steering. In addition to keeping you straight and true, the system also automatically decreases the amount of steering input (as well as effort) necessary to make corrections at low speeds, as while trying to slide into a curbside parking spot.

Just don’t get too comfortable.

The idea is to relax – not fall asleep! 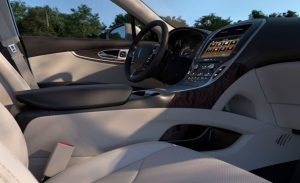 Part of being sporty is looking angry – or at least, intimidating. Look around at all the angry-faced cars, including luxury cars.

But it’s hard to relax when you’re angry – or trying to be intimidating.

The Nautilus wants you to relax.

Everything about it is calming, not just the 22-way massaging seats. Blue rather than red backlighting. Soft tones – and touches, including the pushbutton gear selector, mounted in a vertical stack to the right of the main gauge cluster. It is much more . . . relaxing to use than a feel-less toggle that makes  you double-check to be sure you’re actually in Drive rather than Reverse. 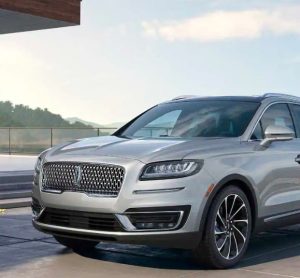 No mistaking the individual PRNDS buttons – and that is very relaxing.

Everything you touch has give. There’s no hardness here. Nor coldness. The cabin of the Nautilus is warm and welcoming.

More so than the rest.

Also with the second row stowed.

It has 39.6 inches of backseat legroom – more than the Lexus RX350 (38 inches) and Audi Q5 (37.8 inches) and vastly more cargo room than either, regardless of the position of the second row. 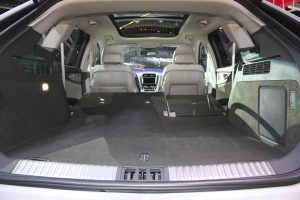 The only one that comes close is the Cadillac XT5, which has 39.5 inches of second row legroom, 30 cubic feet of cargo space behind its second row and 63 cubic feet with the second row folded.

But the Cadillac is angular, angry and very sporty.

It’s not a matter of better or worse.

It’s a question of differences. 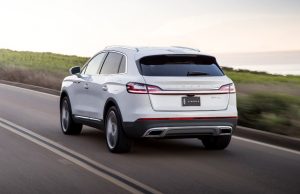 Every new car, just about, has keyless entry – but what if you’ve lost your keys? No problem. You can gain entry to the Nautilus via the exterior keypad, a feature only offered by Lincoln.

Another unusual feature is the factory-installed WAZE app – which can alert you to radar traps along your route as well as as accidents and road work. This app has been around for a couple of years, but the Nautilus is the first to offer it integrated with the vehicle’s factory infotainment system – as opposed to a smartphone app.

Americans used to enjoy driving, just for the sake of it. The Nautilus can help them remember why.