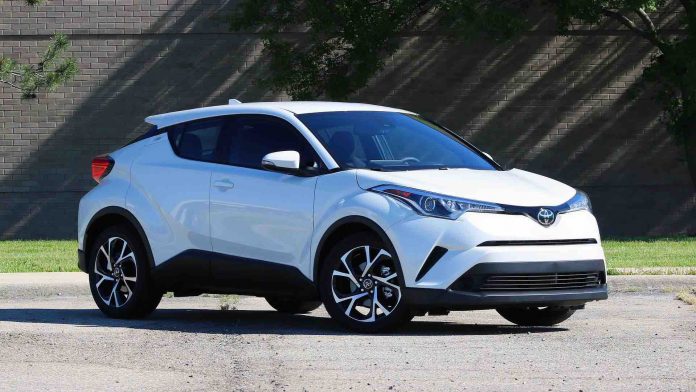 In the first of the new Star Trek movie reboots, we are introduced to a very young and not-yet Captain Kirk, played by Chris Pine. He is a diamond in the rough – lots of potential – but not yet actualized. 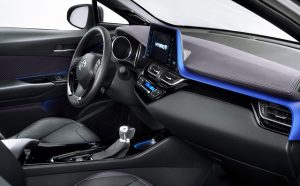 Its body was designed to look like a diamond – faceted and polished, according to Toyota.

It also sits almost as low to the ground (5.9 inches of clearance) as a sports car – but unlike a sports car of comparable size, the subcompact C-HR has more cargo room than a full-sized family sedan. And slots easily into parking spots a full-size sedan’s too big to slot into.

It also has two rear doors – something that the similar-in-concept Hyundai Veloster three-door hasn’t got.

This makes it practical as well as edgy-looking.

But it hasn’t got all-wheel-drive  . . . even though it’s marketed as a crossover SUV. This makes it less practical than other subcompact crossovers like the Honda HR-V and Mazda CX-3, which do offer it (as well as more ground clearance; much more in the case of the HR-V).

But the main fly in the soup is that the C-HR hasn’t got much engine – notwithstanding the influence of Deputy Chief Engineer Hiro Koba, who races in his spare time and helped develop the C-HR’s handling bona fides.

It’s nothing another 30 horsepower wouldn’t remedy, however. 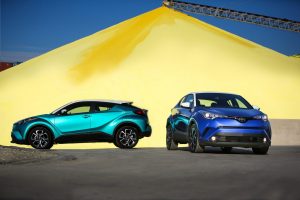 The C-HR is a five-door subcompact hatchback that’s generally similar to other small crossovers like the Mazda CX-3 and Hyundai HR-V but has more in common with sporty hatchbacks like the Hyundai Veloster.

Its practicality is expressed by having more than two doors, usable back seats and lots cargo room for its size – rather than by offering all-wheel-drive and snow-day ground clearance. 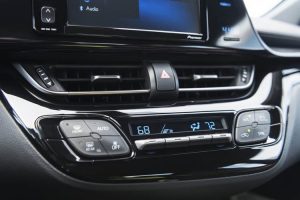 2018 was the C-HR’s first year; for 2019, the number of trims available has been expanded to include the new base trim LE and top-of-the-line Limited.

Last year’s XLE trim carries over as the new mid-trim version of this vehicle.

All trims now come standard with AppleCarPLay and navigation is available – but only as an option with the Limited trim. 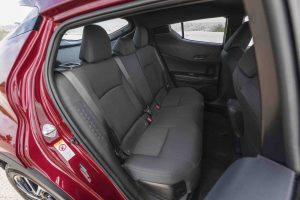 Lots of show; not much go.

Less back seat legroom – and cargo room – than in other small crossovers like the HR-V and CX-3.

Navigation isn’t available in LE or mid-trim XLE trims. To be able to order it you have to spring for the new Limited trim – which costs $1,700 more than last year’s top-of-the-line XLE trim.

All trims come standard with the same drivetrain – a 2.0 liter four making 144 horsepower paired with a CVT automatic and front-wheel-drive. 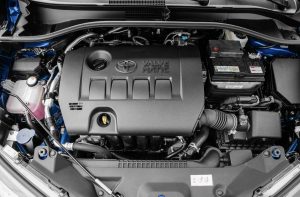 The combo gets the little Toyota to 60 in a bit over 10 seconds and rates 27 MPG in city driving, 31 on the highway.

However, the closer-in-concept Hyundai Veloster offers as much as 201-250 hp from its available 1.6 liter turbocharged engine – and so equipped is three full seconds quicker to 60.

Hyundai also offers a manual transmission, which buffs the Veloster’s sporty credentials vs. the automatic-only Toyota. 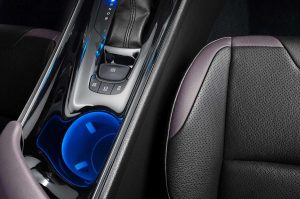 But Hyundai only offers the six-speed manual with the Veloster’s optional 1.6 liter engine. The three-door Hyundai’s base 2.0 liter engine – like the C-HR’s only engine – is also paired only with an automatic.

Nominally, the CVT ought to give the Toyota a mileage advantage.

CVTs have an efficiency advantage over conventional (geared) automatics and manuals, because they have effectively infinite gearing and always keep the engine operating at just the right speed for best-possible mileage.

This explains why so many new cars come with CVTs rather than traditional automatics with six, seven or even ten speeds – as the car companies struggle to meet ever-higher federal fuel economy minimums. 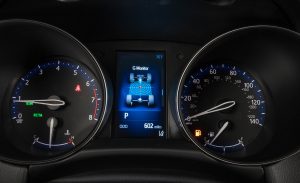 But CVTs aren’t always the most economical choice.

A crosscheck of the specs reveals that the turbocharged Veloster’s mileage with the six-speed manual transmission – 26 city, 33 highway – is actually slightly higher overall than the C-HR’s with the CVT.

But that’s not the fault of the CVT.

For a car its size, the C-HR is very heavy. 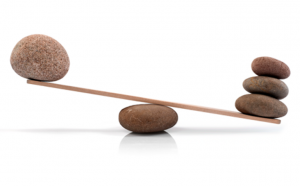 Almost as heavy, in fact, as the much mid-sized Camry sedan, which weighs 3,340 lbs.

It’s hard to figure out why the Toyota is so much heavier than the HR-V and CX-3, especially without AWD. It should be lighter. 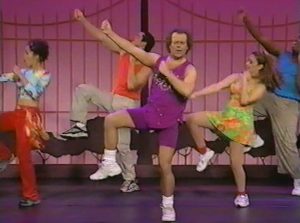 And if it were, it’d be quicker – without needing a horsepower infusion.

A 2,900 lbs. C-HR would probably be able to get to 60 in about the same time as the turbo’d Veloster, but without the turbo. And it would likely be capable of almost 40 on the highway, too. 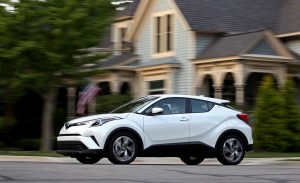 The C-HR reminds me of another car – a favorite of mine  – that also had the looks but not the goods.

And goods are a lot easier to fix than looks.

The not-lamented Pontiac Aztek, for example. It wasn’t a bad vehicle; just a very badly ugly one. The only fix for that was to get rid of it.

I have in mind another Pontiac – one that looked great but needed help in the other department: It was the 1980-’81 Turbo Trans-Am. It looked like 200 MPH standing still but had trouble achieving more than standing still. 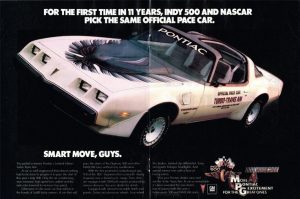 Automatic-only. 10 seconds to 60, no matter how desperately you stomped on the gas pedal.

But the Pontiac was easy enough to amp up. In those days, the thing to do was gut the emissions controls – especially the catalytic converter – add headers, dual exhaust (these cars came with dual-looking exhaust), re-jet the carb, dial in the ignition – and the thing would come alive like KISS in concert.

These days, the solution is to buy speed parts factory engineered (and emissions legit) to wake up your C-HR without waking up Uncle.

Toyota Racing Development already offers a free-flow intake system for this car (see here) and with luck, there will be more such available soon. This car badly needs a more aggressive sounding exhaust system – and a turbo kit would be transformative. 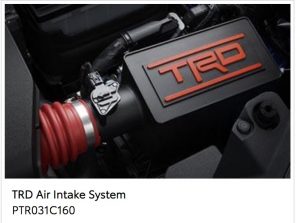 Another route to the same destination would be to lighten it up with carbon fiber replacement body panels, for example.

Something to back up its drift car looks.

The HR-V can get away with going slow because no on expects it to go fast. But here we have something that practically screams sideways and tires frying that is functionally as unthreatening as a Corolla.

At low speeds – and in stop and go driving – the power deficit isn’t noticeable or objectionable. But you do notice – and may object – when you venture out of the urban jungle onto the highway.

There’s enough power to maintain 70-75 without signs of struggle, but not much left to go faster. 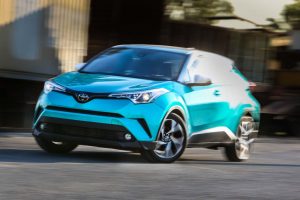 Or pass those going slower.

All of which feels disappointing from the C-HR’s Batmobile-style cockpit, with everything canted toward the driver, surrounded by crocodile-skin door panel trim.

One looks – in vain – for the nitrous button.

The CVT’s shifter is topped by a stubby brushed-nickel ball that feels great in your hand; there’s just not much to do with it. 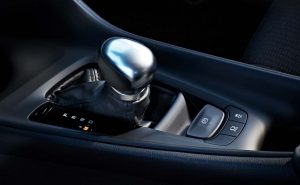 A short-throw six-speed would completely change this car’s character. It wouldn’t make it faster, but it would make it more fun.

But there is an upside to the car’s heft.

The car’s long wheelbase (103.9 inches) relative to its length (171.2 inches) plus a wide track, low center of gravity and standard 18 inch wheels give it cornering mojo, too. 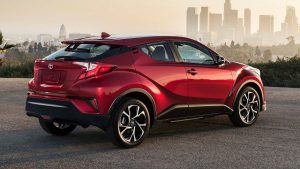 They nailed the look.

People comment – positively. The C-HR doesn’t get lost in parking lots. It isn’t just another crossover, god help us all.

This thing isn’t so much sculpted as cut – like you would with a chop saw. Planes and angles define the facets, the side stampings bulge outward in between valleys that rise again to form molded-in wide-body wheel arches.

You can get a contrast color roof panel and even the cupholder is LED backlit.

But the back seat is tight – aesthetically intimated by the abbreviated rear door glass, which is about a third the size of the driver and passenger-side glass.

The divvying up of legroom is similar. 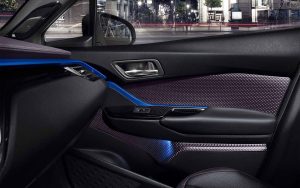 Up front, an NBA-friendly 43.5 inches – better than you’d find in many full-size sedans. But in  back, 31.7 inches, which is nearly a foot less tan up front.

A tall adult can still sit in the C-HR’s back seats without assuming The Position (i.e., the fetal position) but it is much less spacious than up front, and the second-class accommodations feel more cramped than they actually are because of the abbreviated side glass, which drastically limits the backseat passengers’s view.

The Honda HR-V’s back seats are more aligned with its front seats; it has 39.3 inches of back seat legroom; the Mazda CX-3 is similar, with 35 inches – and both have rear door glass that’s about the same square footage as the front door glass.

But, they don’t turn heads and it’s very easy to lose them in a crowd. 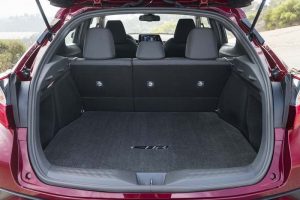 The C-HR’s cargo capacity – 19 cubic feet behind the back seats and 36.4cubic feet with the seats folded – is tremendous for its size. For perspective, the Camry sedan – which is almost two feet longer overall – has a 15.1 cubic foot trunk.

This highlights the space-efficiency of crossovers (even small ones) and accounts for their popularity vs. sedans, whose popularity is on the wane.

The C-HR is for the buyer who doesn’t want just another crossover SUV, but needs some crossover-ish attributes. 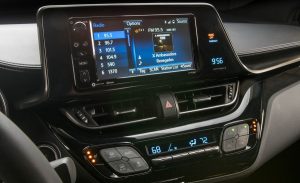 It’s one of a dwindling number of new cars you can buy that doesn’t have it. Which means not having to remember to push the Off button every time you go for a drive – to avoid the engine shutting off at every red light.

And then paint can-shaking itself to life again when the light turns green.

This Toyota also hasn’t got a manual pull-it-up emergency brake, a shame for a car that looks like it wants to drift and even comes with a G meter display to egg you on to try.

Instead, an electric parking brake – which you can’t use to drift. This is a shame, and not as easily fixed as bumping up the horsepower.

There is also Toyota’s nanny-programmed traction/stability control, which can be turned off (so you can drift) but not if the C-HR is moving faster than about 30 MPH. If you are, the programming turns it back on.

This, however, can probably be reprogrammed to turn off – all the way – whenever the button is pushed.

Some may not like that Toyota only lets you buy integrated GPS with the top-of-the-line Limited trim, but that’s easily fixed – with an aftermarket TomTom or similar. And the fact is, aftermarket GPS units are cheaper – and easier to update – than factory systems, which often look (and are) as dated as a ’90s Blackberry after five or six years – and sometimes less. 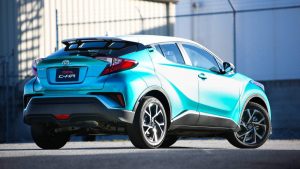 The main thing in the electronics  department that’s lacking – and which Toyota ought to remedy – is the audio system. The standard six-speaker rig (like the engine) is okay – but this cocky little car needs more amps (and speakers) as well as horsepower.

So far, neither is available – even optionally.

There’s nothing unfixable here – and what’s here is worth fixing.