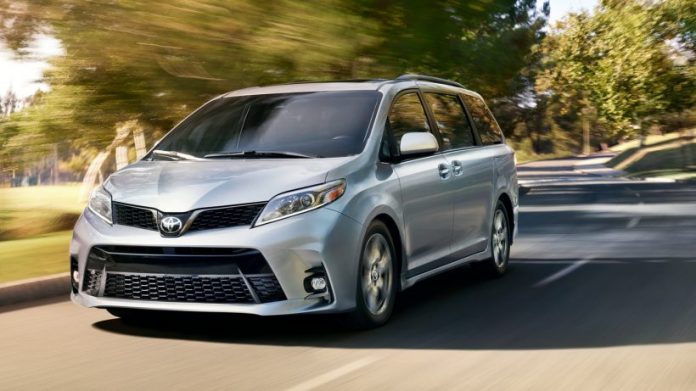 Minivans used to be hugely popular because they were hugely practical. Which may explain why minivans have become less popular than they used to be.

Because they are very curiously less practical in one very popular respect.

Almost none of them offer all-wheel-drive anymore.

Except for this one 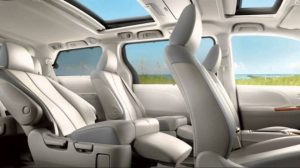 The Sienna is a 7-8 passenger full-size minivan in the same class as rivals like the Honda Odyssey, Kia Sedona, Dodge Caravan (and its Chrysler-badged twin, the Pacifica).

Prices start at $31,115 for the base L trim with front-wheel drive.

AWD is offered optionally with the LE, SE and top-of-the-line Limited Premium trims, in either 7 or 8 passenger seating configurations. 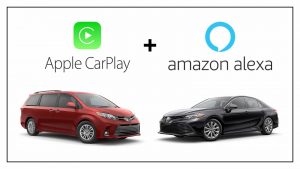 The Sienna’s AWD system is now available with the sportier SE trim – which is the model you’ll want if you want a minivan suitable for vehicular wet work. This one gets a 19-inch wheel/tire package and firmer suspension calibrations, just the tools for doing un-minivan things (and getting away with doing them).

In addition to AWD, another feature that’s unique to the 2019 Sienna is the availability of built-in Alexa, Amazon’s artificial intelligence Oz that you can voice command to look up stuff online, play music and so on. 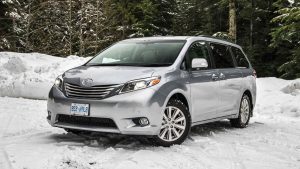 AWD Sienna has snow-day capability its rivals do not offer.

Sporty SE is more than sporty trim. This variant has a handling advantage over other minivans.

Quick. The result of having almost 300 horsepower under its hood; the Sienna may be a minivan – but don’t let that fool you.

Eight passenger seating also requires stepping up to the LE or higher trims.

Kia Sedona and Dodge Grand Caravan may not offer AWD but both cost about $4k less to start and offer similar size/room for people and cargo. 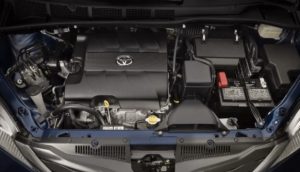 Turbo fouring has not come to minivans – yet.

It probably will, soon.

But for for the present, you can still get an appropriately sized (and not turbo’d to make up for too-small a size) 3.5 liter V6 in the Sienna.

All of these V6s – just for the record – make more horsepower than the V8s that came in most Mustang GTs and Camaros back in the ‘90s.

This minivan – which weighs easily 1,000 lbs. more than a Mustang or Camaro and carries twice as many people, plus their stuff – also gets to 60 in just over 7 seconds. That’s about as quick – or quicker – than almost every “fire breathing” V8 muscle car of the ’60s.

It’s a measure how good we’ve got it today.

Toyota even made a slammed/lowered/road-racy one-off show-car version of the Sienna to showcase what could be done. ave a look:

The Sienna’s V6 (which it shares with the Camry and Avalon sedans) is paired up with an eight-speed automatic transmission and your choice of standard front-wheel-drive or the optional all-wheel-drive system.

Which is one more choice than the FWD-only competition offers.

Ground clearance varies – depending on trim. The sporty SE – which comes with low-profile 19-inch tires as well as firmer suspension tuning – rides closer to the ground, with 6.2 inches of clearance. 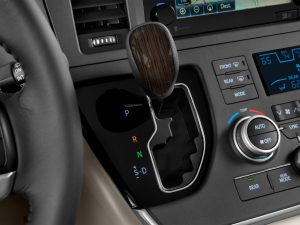 Other versions of the Sienna have 6.5-6.6 inches of clearance.

The AWD-equipped SE is the way to go for handling – a criteria one does not normally associate with minivans, but ought to in the case of this minivan.

The other, higher-riding trims with AWD are of course the way to go in the snow.

There is a mileage penalty to be paid for the additional bad-weather traction (or handling advantage) of the Sienna’s available AWD system, but it’s slight: 18 city, 24 highway vs. 19 city, 27 highway for the FWD version of the Sienna. 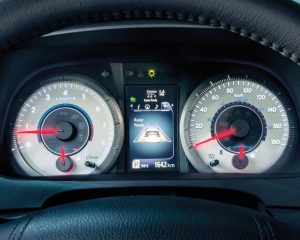 The best of the bunch – the Honda Odyssey – manages 19 city, 28 highway, a negligibly better 4 or so MPG overall. And to get there, the Honda uses a more complicated ten-speed automatic transmission (shared with the new Accord sedan) while the more conservatively engineered Sienna uses a simpler eight-speed automatic.

Given that tow ratings tend to err on the conservative side – for warranty claim reasons – it gives some insight into Honda’s confidence in the durability under duress of the new ten-speed box.

Interestingly, the Dodge Grand Caravan tows the most – 3,600 lbs. – and it uses an even simpler six-speed transmission.

Also of interest, the GC’s mileage (17 city, 25 highway) is only slightly lower than the best-in-class Odyssey’s. This tells a tale of diminishing returns.

The mileage gains  – ten speed vs. eight speed vs. six-speed – are slight but the increase in complexity to get them isn’t. The Odyssey’s ten-speed automatic has three overdrive gears (the Sienna’s has two, the Dodge’s just the one).

Programming a triplicate overdrive transmissions to shift up and down over such a wide spread of gear ratios without lugging the engine or other unpleasantness – is a major engineering (and software tuning) challenge.

And the benefit to the owner is . . . questionable.

Because of Uncle’s insistence that new cars achieve ever-higher MPGs – no matter what it costs us to achieve them.

The Sienna – like all current minivans is big: 200.6 inches end to end, which is only about three inches less than a full-size SUV like the Chevy Tahoe, which is 204 inches long.

So there’s no getting around how much space it needs curbside or in your garage. But even though it’s about the same overall size as a full-size SUV, it’s easier to maneuver into either space because most of its length is in the middle – between the front and rear axle centerlines.

The driver sits much farther forward – almost cab forward, much closer to the front wheels. There’s less hood in front of him because the Sienna’s engine is mounted transversely (sideways) rather than longitudinally (front to back) as in a big SUV. 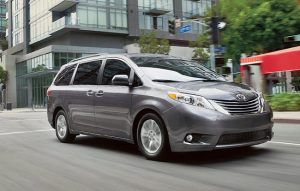 You thus have a better sense of the vehicle’s proportions when maneuvering in close quarters and the actual maneuvering is more adroit because the Sienna’s turning circle is tighter than a big SUV’s – 37.5 feet vs. 39 feet for the Chevy Tahoe. You also have a great canopy of glass all around, which gives a minivan like the Sienna something all-too-many new cars haven’t got anymore, regardless of their physical size:

It’s easier to get in and out of minivans, too.

They have car-like step-in height, so no running boards, milk crates or grab handles are needed to climb aboard – as you often do need with today’s jacked-up SUVs and crossover SUVs, which emulate the SUV look, including their jacked-up stance. 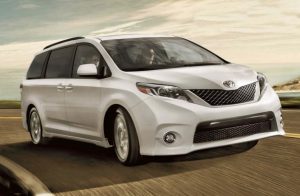 Once inside, you still sit up higher than you do in most cars – another visibility boon.

Minivans have a reputation for being road toads. This is very dated information. The Sienna is quicker than most crossovers and quick enough to keep up with most V8 SUVs. The difference between 7 seconds to 60 and 6 seconds to 60 (the time of the 5.3 V8-equipped Tahoe) is . . . one second.

If you were to drag race the two, the Tahoe would be about half a length ahead at the end of the 0-60 run. If you are faster-reacting to the green light, you can make that up and beat the Tahoe to the next light.

Regardless, he’s not going to walk away from you – unless you let him. 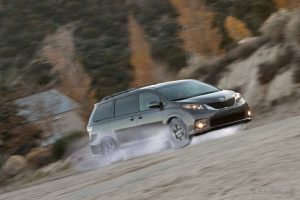 And in the curves, the Sienna will walk away from the Tahoe and lots of others, too. Remember, it’s much lower the ground than a jacked-up SUV (especially the Sport trim, which has about the same ground clearance as many sport sedans) which is a help – and the AWD is a definite handling advantage on dry/wet paved roads – which 4WD is not.

Truck-type 4WD is designed (usually) to be off when driving on smooth/paved roads; it is meant for traction in snow and mud – not grip in the curves.

Finally – and may the Motor Gods bless Toyota for this – the Sienna is not (yet) afflicted with the obnoxious auto-stop start system almost all new cars, crossovers, trucks and SUVs now come with as standard equipment.

The Sienna’s V6 only starts – and stops – when you push the ignition button. 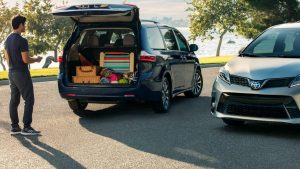 Space efficiency is a minivan thing.

The rows are also more accessible, because of the low step-in hight and the dual sliding doors on either side. It is much easier to climb into a minivan’s third row row than it is access the third row of anything with conventionally opening doors or the second row only. 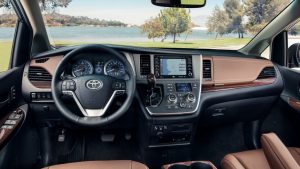 Like the other minivans, the Sienna can be ordered in seven or eight passenger seating configurations; the second row has almost two feet (23 inches) of fore-aft adjustability and tip/fold, too. Eight passenger models have a stowable  center section.

Total cargo capacity is 150 cubic feet (first and second row seats no in use) which is hugely more than the 94.7 cubic feet in the Tahoe, with its second and third rows folded. 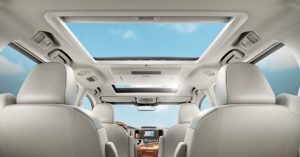 You can even  get a 4×8 sheet of plywood inside the Sienna – and it’s easier to get it in the Sienna (and back out, when you get home) because of the van’s lower cargo floor and (vs. truck-based SUVs like the Tahoe) wider-opening rear liftgate. 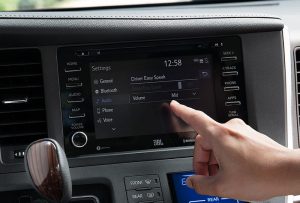 Some neat Sienna features include a button to the left of the steering wheel that lets you turn off the power assist for the sliding doors. This is helpful for people who don’t need help opening the sliding doors – and prefer the faster manual operation of yanking them open and slamming them home using muscle power – but still have the option to go power-assist for family members not as strong-armed.

Toyota also offers a voice-amplification system – Driver Easy Speak – that broadcasts the driver’s vice through the Sienna’s speakers to the kids (or whomever) back in the third row, eliminating the need to yell to get their attention. 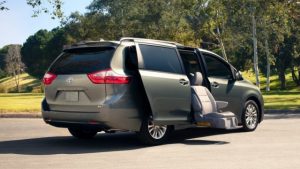 And for 2019, the Sienna (along with the 2019 Camry) offers Alexa, the same basic thing you can get for your house but now in your van.

The rearseat entertainment system (single 16.4 inch widescreen) can stream two different videos at the same time from the Internet via Bluetooth’d devices or Blu-Ray/HDMI inputs.

You can also order a factory-installed chair lift system.

Minivans are supposed to be practical – and this one is more practical than the others.

But you don’t have to tell anyone about that!