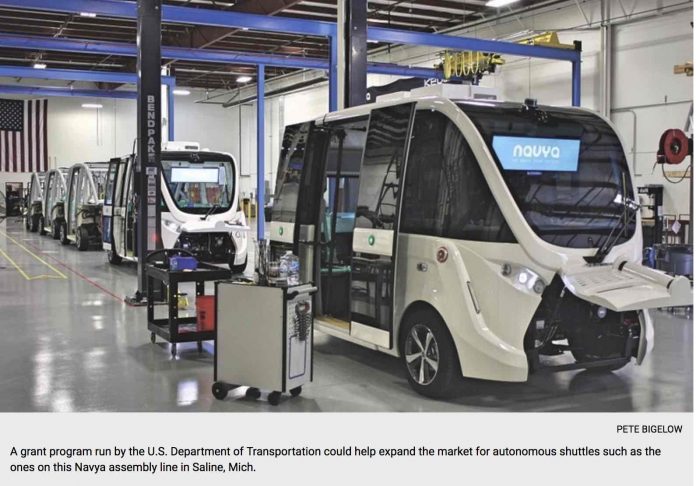 Language is everything – because language is thought.

Get people to accept a given meaning and their thinking follows. This includes inventing new meanings, the opposite of the original meaning.

Obvious examples include “liberal” – which used to mean someone who favored small government and leaving people alone. And “customer,” which at one time meant someone who sought a service or bought a product they were free to not buy.

The latest example of meaning inversion is the use of the word “market” to describe the use of government redistribution of other people’s money to promote something which would probably fail absent the government-redistributed money.

For example, the “awarding” – there’s another one! – of $60 million in “grants” to rural communities, for the purposes of Potempkin Villaging into existence a “market” for automated transportation, including automated shuttle buses.

Which, of course, are styled “autonomous” busses – another meaning inversion. But they are in fact automated, not “autonomous.” They are under the control of some other party, not you. They are certainly not independent, free from external control – which is what autonomous used to mean.

The obvious but never posed question arises: If there is a need for shuttle buses – whether automated or not – then a market (no italics or air quotes) already exists, does it not?

The market provides for such needs, without the need for redistribution  – via the profit motive. If there is need enough to make it worth offering shuttle bus service – i.e., money can be earned by providing it – then someone would provide it.

If a market exists, there is no need to Potemkin Village one into existence; one which will only exist for as long as it is propped up by government redistribution of other people’s money – which those people would probably have rather spent on things of value to themselves. 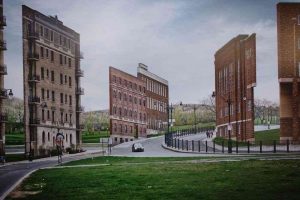 Implicit in these “grants” is the absence of a market.

But that absence never stopped the busybodies and control freaks who constitute “the government.” These believe there ought to be automated shuttle busses and so on in these rural communities and are going to pop them into existence regardless of the absence of any actual market for them.

The media is dripping with saturation coverage about the Automated Future. Well, if it is The Future, by dint of its general marvelousness, why is it necessary to shove the proverbial funnel down the goose’s throat and force-feed it to him? Why does inevitability need a nudge?

But the rural communities aren’t victims – they are clamoring to be the recipients of stolen property.

The corrupting influence of this theft rendered something acceptable by the alchemy of transmuted meaning – a “liberal” is now someone who cannot conceive of a government that isn’t too big and doesn’t micromanage every aspect of a person’s life (except when it comes to a woman’s “right” to terminate a pregnancy; in that case, she is free to do as she likes) and – presto! – the busybodies and control freaks at the  rural community level are just as eager to put other people’s money into their pockets as the busybodies and control freaks in Washington are to take it out of other people’s pockets.

Just call it a “grant” and it transmutes into innocuousness, like the package of ground beef nicely presented at the grocery store. No need to think about the cow and what became of him.

Thus, “73 proposals” have been received by the federal Department of Transportation, each a rent-seeking plea for other people’s manna to rain down upon them.

It’s all couched in gentle-sounding euphemistic language. The industry trade publication Automotive News published a “news” (really, opinion-mongering) piece describing the “conversation” between one of the small communities – or  rather, that small community’s busybodies and control freaks – and the rent-seeking companies who will provide the automated shuttle busses there is no market for. 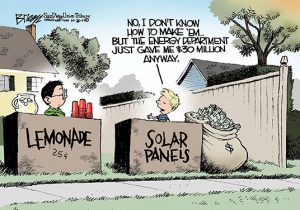 A conversation – in non-political language – is free of force. But the use of that word in this context is very deliberate; it is used to imply a free exchange – we’re just talking! But when the “conversation” involves the busybodies and control freaks who constitute the government – whether in Washington or in a rural community – there is always a gun on the table.

It is a “conversation” of the kind that Luca Brasi had with Johnny Fontaine’s manager – except less honestly conducted.

When it comes to the government and the busybodies and control freaks who make it up, it is necessary to mewlingly couch the violence inherent in everything they touch with airbrushed words designed to hide the violence, by preventing any discussion of it.

If the debate is merely about “expanding markets,” who could object?